When an engine quits at low altitude as one did for me, it’s easy to misjudge the glide needed to put the airplane where you think it should go. But thanks to technology that trickles down from Garmin’s emergency Autoland, Garmin’s latest retrofit navigators paired with the appropriate flight displays take the guesswork out of the drama.

Moreover, when coupled with a Garmin autopilot, engine failures are almost foolproof because the autopilot will hold the appropriate airspeed for the aircraft’s best glide performance, while flying the airplane to the runway environment while the pilot sorts out the emergency. Here’s an overview of the system’s functionality, with a rundown of the equipment that’s required to make it all work 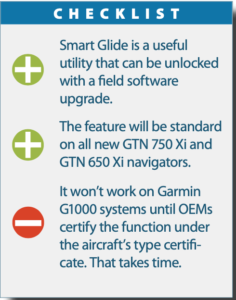 Unlike emergency Autoland—which is governed under the aircraft’s type certificate and available as an OEM feature only—Smart Glide is an aftermarket product. It is not an autonomous landing system, and unlike Autoland, it’s up to the pilot to put the airplane on the ground.

Smart Glide requires a GTN 750 Xi or GTN 650 Xi navigator, which will be loaded (in the field) with software version 20.20. The software is provided to authorized Garmin dealers at no charge, but expect to pay shop labor for the software install, configuration and revision to the flight manual supplement. Smart Glide won’t work with Garmin’s budget navigators—the GNX 375/GNC 355/GPS 175—or with legacy GTN units and long-discontinued GNS navigators.

At press time in late July, Smart Glide wasn’t available on the G3X Touch—certified or experimental—or on the Garmin G1000. We expect the G3X Touch will be a player fairly soon, and know for sure that existing G1000 NXi owners will demand it. If you are one of them, you’ll likely have to wait for the aircraft manufacturer to include the feature in the aircraft’s type certificate—a bugaboo that’s annoyed owners for years.

Smart Glide also requires one of Garmin’s primary flight displays. This includes the G500/600 TXi retrofit system and a GI 275 electronic ADI when upgraded to the latest software that supports the feature. 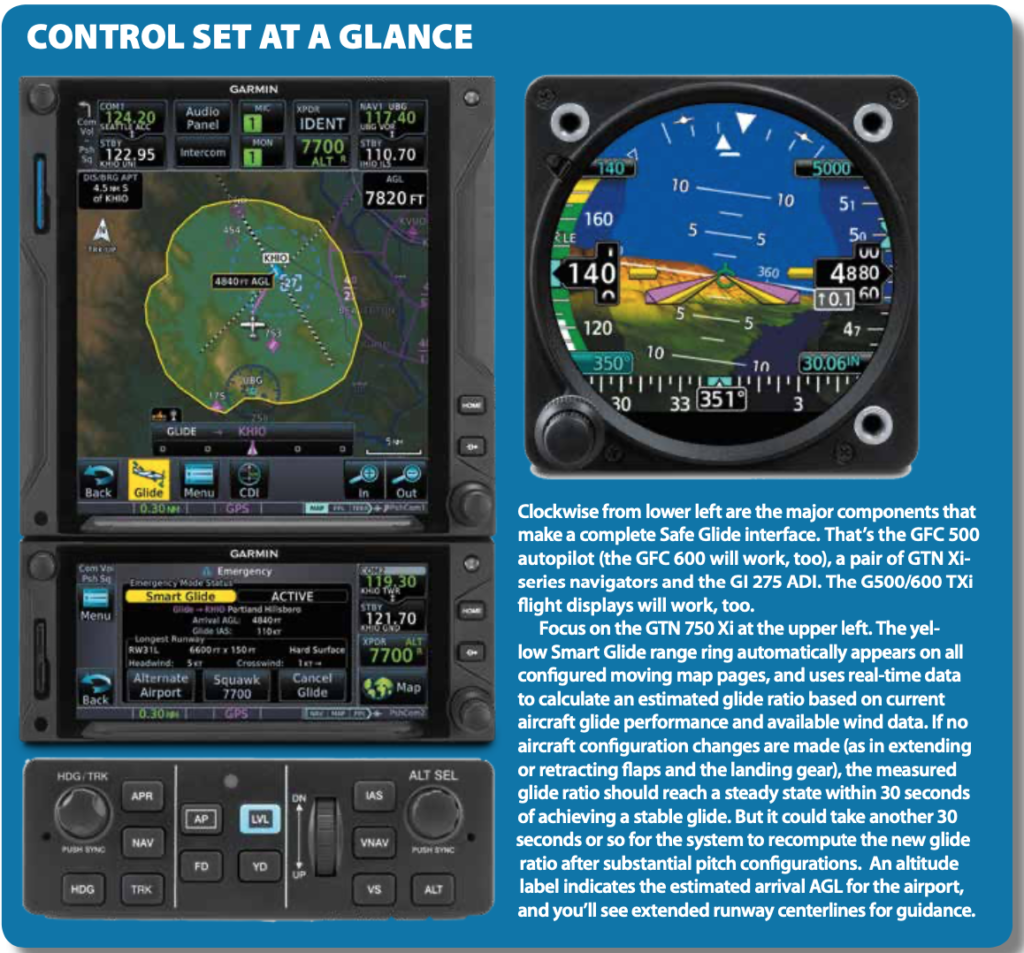 With Smart Glide, perhaps the first thing to do (after maintaining control) is press the activation button, or hold the Direct-To key on the navigator for three seconds. Smart Glide is a menu option in the navigator’s Emergency page, where you can tap to activate it. The Hold for Smart Glide Activation control label appears near the bottom of the display when you activate the feature through the navigator. At that point, the GTN Xi navigator signals all configured LRUs (line replaceable units) that the Smart Glide function is active.

The idea behind Smart Glide is to cut directly to the chase and find the nearest suitable airfield to land. It does not provide automatic weather avoidance, vertical guidance or altitude management, although some of these features are built in to one or both of the navigators or from remote sensors.

The feature is not available below 1000 feet AGL after takeoff and above 36,000 feet and if GPS position is lost. The system goes through an initialization process that lasts for roughly 40 seconds after the GTN navigator powers up. There is nothing the pilot has to do other than activate the Smart Glide mode.

Smart Glide’s functionality changes based on whether or not a suitable destination airport is within the computed estimated glide range. If you have an active flight plan in the GTN Xi navigator at the time of activation (and you most always will), Smart Glide replaces the existing flight plan with a direct glide route to a suitable destination airfield. It also configures the Map page to display a range ring graphic and the arrival AGL data.

Of course the most common question is an obvious one: What happens if you can’t glide to an airport? The system provides an alert saying so, and you can see it visually via the range ring graphic on the Map page. The system also indicates the best glide speed for the aircraft’s gross weight, while providing a list of alternate airports that are within the estimated glide range. There may be more than one option, and it’s up to the pilot—not Smart Glide—to select the one that seems best.

Regardless if you can make an airport or not, Smart Glide tunes the comm radio to the destination control tower frequency or CTAF, and when the GTN Xi is interfaced with a Garmin remote transponder, it enables quick tuning of the 7700 code with a one-tap softkey. The external CDI automatically changes to a 0.30-NM scale. There are certain criteria for selecting a priority glide-to airfield: The weather conditions must be MVFR or better (but keep in mind that weather rankings apply only to airports with weather reporting capabilities, and the weather affects ranking only when equipped with a compatible weather receiver), and the airport must meet the configured runway surface requirements for the aircraft.

Since there may be more than one choice, any remaining airports are deprioritized if the airport is private, the weather conditions are IFR or lower and the longest runway is less than the configured minimum desired runway length.

Keep in mind that a lot of data is removed from the display during a Smart Glide activation. The short list includes fuel range rings, charts overlay, airways and NEXRAD. This makes room for dedicated Smart Glide data, including the mentioned alert and warning banners, runway extensions, active glide route, AGL and distance, plus bearing and airport data fields and of course the glide range ring. Dual GTN Xi navigators will enhance the interface with more data spread out.

Ever Hear of Drift Down? 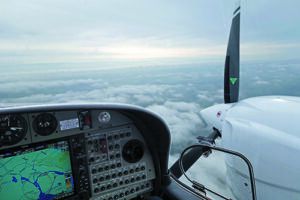 You’re flying your normally aspirated piston twin over the mountains of Colorado and Utah. You’re on an IFR flight plan in the clouds at the 16,000-foot altitude you chose for comfortable clearance over the highest peaks. Suddenly the whole airplane shakes, accompanied by a dramatic yaw and roll. Of course, your autopilot adds to the urgency by announcing that it has disconnected.

You’ve lost an engine. You quickly gain control over the impending upset. Then you reflexively perform the mantra: Identify, verify, feather, power up, clean up. All that oil streaming back from the right cowling tells you that restarting is not an option. You shut it down and the shuddering stops. Now what?

You can’t maintain 16,000 feet. In fact, you’re already descending through 15,600 feet. You declare an emergency and consider your situation. Smart Glide misses something.

Ever heard of drift down? It’s often covered in jet aircraft, but we don’t hear much of it with piston twins. Doesn’t matter; that’s what you’re facing right now. The left engine alone won’t keep you at altitude, but it slows your descent. Plus, as you descend, that operating engine will develop more power, further slowing your descent. Eventually, you’ll reach an altitude where the engine will keep you level. The details of that gradually decreasing descent are the core of drift down calculations, but the reality is far more complex, taking into account temperature, speed to use, trading speed to maintain altitude until reaching the target speed, ice, etc.

Now, add the worry about that “fourteener” ahead (a 14,000-foot peak). Will you clear it? You don’t know and have no reliable way to know. Perhaps Garmin will add drift down to Smart Glide in a future version. We twin-engine pilots certainly hope so.­ (Thanks to Erik Brouwer for the engine-out image).

If you do, and that includes the Garmin GFC 500/600 series retrofit systems, Smart Glide’s capability gets kicked up a notch. Upon activation, the autopilot servos engage (and stay engaged if Smart Glide is activated when the autopilot is on) when the aircraft is more than 2 nautical miles from the destination airport. Since these autopilots have airspeed hold, the system will pitch to maintain the best glide airspeed. Smart Glide also triggers the autopilot flight director modes to target the configured best glide speed, while tracking the direct-to route to the airfield.

It’s important to stress that even when it’s coupled to the autopilot, Smart Glide does not manage altitude. Configure the aircraft appropriately with the flaps and the landing gear (in a retrac) to make the landing yourself. Remember, this isn’t Autoland. But there are good visual cues along the way. Flashing textual annunciations alert the pilot of warning, caution and advisory conditions. These annunciations appear in a banner on the Emergency page and over the route display on the GTN Xi’s Map page. They turn solid or disappear after five seconds. There is an advisory alert (white text on a black background) that says Approaching Airport when the aircraft is 4 nautical miles out. Can’t make the field? You’ll see an Airport Out Of Range caution alert. If you make it to within 2 nautical miles, you’ll see a Maneuver And Land message warning alert.

In case you’re wondering, the glide airspeed data is preset by the installer during the software upgrade, so you want to backstop the numbers entered (for best glide airspeed at gross weight) with the aircraft’s official flight manual and/or flight manual supplements. Provide them the data.

Garmin said that it’s planning to add more display options for Smart Glide, but didn’t say which ones or when that will be. We would like to see the option opened up to play on legacy Garmin displays (and even third-party displays), plus compatibility with the other navigators in Garmin’s current lineup.