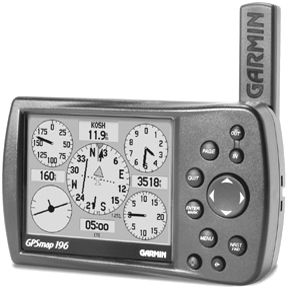 When Garmin unveiled its GPS 295 three years ago, we thought it closed the door on knock-your-socks-off portable navigators for awhile. It had color, approaches and stone-simple operating logic. What else did you need? And with everyone else essentially out of the aviation portable business, who would take on the 295?

No surprise that Garmin is taking itself on in the form of the GPS 196, its first aviation portable in three years at street price of about $1000. (Did we say three years like weve been waiting in breathless suspense? Were obviously jaded by the long-gone days when Garmin tossed a new handheld into the market and enjoyed a feeding frenzy of buying.)

We doubt if thatll happen with the 196 but, nonetheless, its a savvy combination of form factor, fresh features and improved operating logic that should do exactly what Garmin intends: to replace those thousands of aging GPS 195s that are now little beyond 20th-century navigation artifacts and heavy enough to be doorstops.

Ahoy
Like most of Garmins portables, the GPS 196 springs from development in the larger and more profitable marine and land navigation markets, specifically a sea-going model called GPSMAP 176/176C. And yes, the C is for color in the marine version but that isnt available in the aviation version. Yet. More on that later.

One of our minor complaints about the color 295 was that Garmin sold land nav software and accessories for it but the unit was a so-so land navigator. Garmin has done a better job of integrating land navigation into the aviation platform this time and its selling accessories so the gadget can easily do double duty in the car.

Since the 196 is supposed to put the doddering 195 to rest, the most apt comparison is between the two. Although its lighter-15 ounces for the 196 versus 1-pound, 5 ounces for 195-the 196 isnt exactly smaller than the 195. But it has a more yoke-mount friendly squarish form factor than the 195 does.

Side by side with the 195, several things are immediately obvious. First, the refresh rate. The 196 has a much faster processor than the 195 so when scaling up and scaling down, its almost instantaneous in refreshing the screen. The 195 processor ran at 16 Mhz, the 196 runs at 66 Mhz.

At larger scales, with dense detail, we noticed just a slight refresh delay in the 196. By comparison, the 195s refresh rate is glacially slow.

Both screens are about equally legible, in our view, and remain viewable in direct sunlight. But the 196s pixel density is twice as great and side-by-side, the difference is quite noticeable; the 196 is much sharper and the gray shading is more subtle.

The screen real estate is divided somewhat differently on the 196. The map occupies the left 3/4 of the screen while the numerical data is presented on the right side.

The nav digits can be customized to be positively huge so any geezer who complains about the microscopic typography on a Lowrance AirMap or a Garmin GPS 90 will have no trouble reading this display. The numerical data is fully customizable and for one field alone, we found an astonishing 41 choices of data to show in that box, ranging for GPS altitude to flight timers to glide ratio to a selected waypoint. The data can be presented in a single column, two columns or a column with HSI. Or you can suppress it entirely in favor of a full page map.

The 196 also has a trip page and a full numerical-only page with 10 data blocks, each customizable with the aforementioned choices. Nice, of course, but ho-hum compared to the 196s real eyeball opener: a primary flight display page.

PF…What?
For the boating set, a PFD is a personal flotation device but pilots know the acronym to mean primary flight display. Youve been reading about these things for several years; all-glass cockpits with solid-state gyros and smooth-as-warm-molasses flight dynamics. As noted in our Oshkosh report on page 20, these are just coming into the market at high prices. Garmin is offering a poor mans version for about a grand.

Relying strictly on accurate, rapid GPS position updates and software tricks, the 196 is able to calculate track and GPS altitude. It thus displays track on the HSI as heading and GPS altitude in a format that mimics the look of a conventional altimeter, albeit not the MSL accuracy. The VSI senses GPS altitude changes and displays that as a rate of change while the turn coordinator does the same with rate-of-track change.

Frankly, given the limitations of GPS, this shouldnt work at all, let alone well. But it does, leading to the obvious question as to whether you could use this thing to remain upright in the clouds following a gyro failure. The answer is a definite yes. (See sidebar at end of story)

Well admit to some surprise at Garmins decision to include this feature in the 196 for we well remember Garmins initial reaction to adding approaches to the 195. UPSAT (then IIMorrow) pioneered this feature in its Precedus handheld. When we asked if Garmin would follow suit, we distinctly recall the answer having to do with a cold day in hell and stepping over dead bodies.

Yet Garmin did add approaches to the 195 and other portables and the 196 has them, too, including the vectors-to-final feature found in Garmin and other panel mounts. In other words, this is the closest portable yet to matching the capabilities of certified panel mounts.

In fact, it has one feature even panel mounts dont have: an automatic flight logging provision that records where youve been and how long you flew. Garmin will be providing free logbook software to go along with the 196 later this summer.

Yoke Friendly
In the past, weve complained about most yoke mount hardware as seemingly developed by a second-year design student one payment short of completing his electroshock therapy. In Garmins case, the kid appears to have graduated and the mount is substantial, well thought out and easy to use. It snaps easily into and out of the cradle and power and antenna connections are convenient.

We tried it in a Mooney and a Baron and found that the 196s horizontal form factor nestles nicely between the yoke horns and is thus less intrusive than the 195. It has two antenna options, a rotatable pole antenna and a remote patch, which is a must-have if youre going to rely on this as a back-up. Garmin wisely used the larger BNC connector for the antenna instead of that delicate little jack the 195 had. Roll over that with a seat roller and kiss it goodbye; the BNC is more durable.

The back of the 196 has jacks for the antenna and the power/data cable which serves to bring power in and position data out, if needed. Its also the port used to update the database and to load land data onto a removable flash memory card for street navigation.

When we reviewed the color GPS 295 two years ago, we opined as how the color was nice but we thought the real achievement was in Garmins attention to a logical operating system. The company has continued to refine the operating logic and we think the 196 represents an improvement over the 295 and a quantum leap over the 195.

The 196s $1049 list price includes the yoke mount, power cabling and a bracket suitable for the automotive mount. Another $35 buys a beanbag base mount for the car.

As with Garmins previous offerings, the 196 has a combination of dedicated keys-direct, nearest, page, zoom/in/out-and a thumb-sized central rocker for toggling data.

Navigating the pages is childs play, as is plugging in a direct-to waypoint. One minor peccadillo Garmin has never changed is the need to turn on the editing function by punching the enter key. Some readers have complained that this isnt logical but it can be learned.

Still, the keys and controls of the 196 are well layed out and we note that the pressure required to toggle in numbers and letters is far less than with the 195 and previous Garmin portables.

Land Navigation
The 196 is a better land navigator than any of Garmins previous aviation portables, in our view. Garmin has developed a new mapping product called City Select, which sells for $299. The kit includes a CD-ROM with detailed city maps, cables, a 65MB flash card and a USB-capable card burner. (A larger flash card is available.)

Its possible to dump the street data directly from the CD-ROM onto the card while its in the unit. However, Garmin recommends using the USB utility to load the card, then inserting the card into the navigator. This, were told, is much faster. Each card load covers a region. The one Garmin provided us covered southwestern Connecticut and the Oshkosh area.

Land navigation is turn-by-turn, which means that the 196 calculates a route based on your stated parameters-faster time, better route-then beeps when the turn point is approached. You can ask it to avoid toll roads and/or highways.

The street maps have sufficient detail to allow address look-up, followed by directions to that address. The color 295 isnt a true multi-purpose navigator, in our estimation, but the 196 is.

Given the success of the 295, can Garmin really hope to pitch another monochrome navigator or are they about to roll out a color version of the 196? No, says Garmins Tim Casey. Even though the marine version has color, the company believes current technology wont support quality color for the aviation unit. It may happen, it may not.

Conclusion
As with the 295, we have no reservations in recommending this new product from Garmin, which nicely encapsulates all that the company has learned in an impressive string of successful aviation portables.

As we noted in our review of the 295, color is nice but its not a must-have. Whats critical, in our view, is transparent operating logic and practical, easy-to-use features, which the 196 has in spades.

Further, the HSI page has shown itself fully capable of bailing a pilots butt out of a nasty no-gyro situation and that alone makes it worth the asking price, in our estimation.