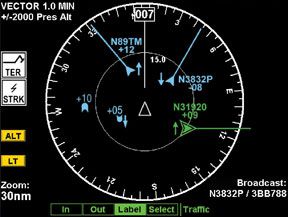 Not long ago, owners of TIS-traffic equipped GTX330 Mode S transponders wondered why they willingly dropped six grand for now-orphaned technology. Once billed it as a grand-slam modern investment in both safety and airborne data products, the FAA is pulling the plug on some of the remote terminal radar sites that transmit TIS-linked traffic data, in favor of the new digital ARS-11 radar.

Despite the pending doom of an orphaned TIS technology, the automated GTX330

Mode S transponder remains a lively seller and arguably the top choice for an entry-level traffic minder. We hoped for an easy mod to existing GTX330s that would allow them to play in the force-fed world of ADS-B. The GTX330ES (and remote GTX33ES), with 1090 Extended Squitter isnt exactly that, but is a step in that direction. While its not full-fledged ADS-B, it seems capable enough for starters.

In the avionics technical world, the transponder squitter is the transmission or reply format that sends data to ATC facilities over the 1090 MHz frequency. Its the backbone of airborne transponder pulse theory. In the ADS-B world, the technical thread revolves around 1090-ES- for 1090 MHz Extended Squitter.

Thats not to be confused with the UAT, or Universal Access Transceiver. With ADS-B comes a handful of abbreviations that substantiate the layers of ADS-B-VDL 4, TIS-B, FIS-B-the list goes on. Its no surprise that many pilots are confused and misinformed on ADS-B.

The 1090-ES and UAT handle the communication with ground stations and/or other aircraft in different ways. The 1090-ES interface is common in commercial aircraft that routinely fly in the flight levels, while the UAT link was designed for lower-altitude, smaller-craft applications.

Extended squitter streams data including aircraft address information, GPS-based position, velocity, and projected heading data to the ADS-B ground stations and other ADS-B equipped aircraft via the 1090 MHz pulse. The key here is automatic broadcast, resulting in better surveillance, rather than old-school interrogation theory (a.k.a. request and reply, which suffers from a slow refresh rate).

The other piece of the ADS-B puzzle is TIS-B (not to be confused with TIS traffic as we know it now). TIS-B means Traffic Information Service Broadcast, and is integral to a so called “free flight” ATC system of NexGen. Garmins GTX330ES model will do TIS-B, but understand that it doesnt receive any ADS-B (including TIS-B) data. It strictly broadcasts aircraft data. It must be interconnected with approved Garmin panel-mounted GPS systems, such as the GNS400W- and 500W-series, GNS480/CNX80, and G1000s with GDU software 9.11 and higher.

The GTX330 is a Level 2 transponder, which provides downlink of the aircraft information in which its installed. ATC ground stations interrogate the unit (and other Mode S models) using a unique, 24-bit Mode S address. This capability includes the ability to recognize the programmed aircraft tail or flight ID number, as well as its maximum speed capability for interface with airborne TCAS traffic systems.

What You Get with ES

The new GTX330ES is not an all-out ADS-B interface, but it is a step in that direction and might comply with the future ADS-B minimum requirements. When we covered the GTX330 in our transponder round-up in the August 2008 issue of Aviation Consumer, we hoped for a GTX330 model that would enter the world of TIS-B broadcast. Several other manufacturers, including Honeywell with their model KT73, suggest similar future upgrade paths to their Mode S transponders.

The GTX330ES has a list price of $5995, a premium of $1000 compared to the legacy GT330, which is priced at $4995 in extended 2008 pricing. Garmin builds the ES models based on individual demand, which means there are none on the shelf. Garmin told us they can ready a unit for shipment in a day. Existing legacy GTX330/33 models can be upgraded for $1200, which includes a new, two-year warranty.

Installing a GTX330ES isnt much different than a legacy GTX330 when interfaced with a Garmin navigator. Digital ARINC 429 connects the data to and from the boxes while the TIS traffic receiver functionality remains the same (again, this is not TIS-B, but TIS traffic alerts).

The L-band antenna system remains an integral portion of the interface and this includes low-loss coaxial cable. In hopes of saving money, many shops will utilize the antenna and cable that remains from an old transponder and this could shortchange performance. Depending on teardown, antenna system replacement could approach $1000. We strongly advise against cutting corners when making the switch to this unit, given the importance of a reliable data stream. Ask your shop if the installation includes a new antenna system.

As long as your avionics shop has appropriate and calibrated Mode S testing equipment, complying with FAR 91.413 two-year transponder certifications remains the same. The GTX330ES will play along in dual transponder installations just as legacy units do.

The initial configuration/programming of a GTX330ES solves some of the mystery thats associated with the 1090-ES ADS-B data stream label. One of the units configuration pages includes a field for setting the aircraft length and width-ranging from less than 15 meters to greater than 85 meters long, and less than 11.5 meters to greater than 80 meters wide. Another setting specifies the aircraft tail number or flight identification number, and its gross weight and speed category. Theres also built-in GPS signal monitoring.

The interface to the panel mounted GPS is already a major part of a GTX330 interface, offering large amounts of smart automation as TIS pictorial traffic data is displayed on the panel-mount GPS. The unit receives GPS ground speed over the data lines, which is responsible for the auto-STBY/ALT and timer functionality. But with the GTX330ES, its this integrated GPS position, speed and heading that play the important part of the broadcast output.

At first blush, the GTX330ES seems an easy way to enter the ADS-B world. A GTX330ES along with an approved interface will result in a partial ADS-B status. But because it wont receive other ADS-B data, dont expect to see the same thing you would if you flew with a full-up UAT system similar to Garmins existing GDL-90, a dedicated ADS-B system with full input and output capability.

Its early in the ADS-B transition to bank on a sure-thing equipment suite. The majority of consumers we spoke with also seem certain that the alphabet groups will delay the requirements for ADS-B equipage. Industry reps predict a widespread ADS-B Safe Flight 21 ground infrastructure by 2013. The proposed compliance mandate isnt until January 2020. While some owners we spoke with are anxious to load ADS-B in their aircraft, and users of UATs enjoy some benefit, ADS-B data broadcast offers little if any operational benefit to existing missions right now.

If it were us, wed resist the temptation to invest in any ADS-B gear for now if fulfilling the mandate was our only agenda-its just too early. We remain advocates of TIS traffic, and still recommend it as a reliable traffic minder thats cheaper than other systems in areas where there is TIS coverage. But we think spending the extra grand for the ES model is still a gamble. If the Extended Squitter remains the basic way to fulfill ADS-B equipage requirements, the box can be painlessly upgraded for a minimal investment later on.