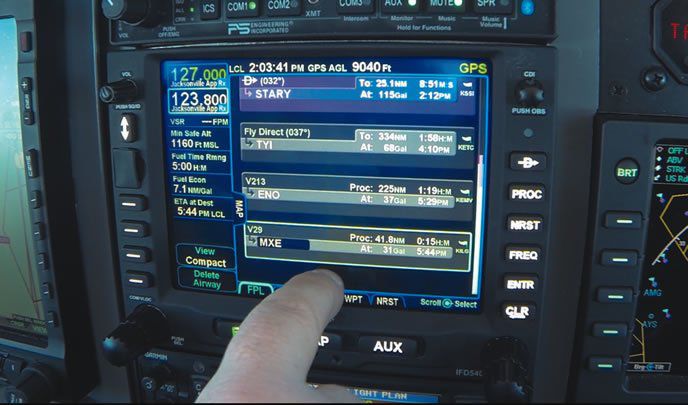 There is a lot to like about the IFD540, including clever mode/rocker bezel switches, plus softkeys that Avidyne calls Hybrid Touch, for the ability to also touch onscreen labels. The configurable moving map data fields put a huge amount of information in the pilots glance and comm frequency decoding is useful. The ability to see the graphical route-as well as the flight plan simultaneously-is a huge improvement and having altitudes displayed on an approach could conceivably prevent a tragedy one day. But I also uncovered some warts that left me scratching my head.

The biggest disappointment is that the moving map iconography could be much improved; the lines are thick, the fonts large and some basic information like airspace altitudes are missing. Avidynes older EX600 MFD displays more map information, more clearly on an identical resolution, physically smaller display and even a smaller Aspen MFD displays more information about airspace and altitudes. Data feeds, such as from the Avidyne MLB700 broadcast weather receiver, may omit basic information that cannot be displayed, such as the altitudes of AIRMETs, making their horizontal extent less useful or even misleading. Finally, the oppressive yellow terrain overlay and oversized obstacle icons on the map render it much less useful at low altitudes.

Before an approach is activated, its internal waypoints are not visible, nor are waypoints in a missed approach prior to activation. There are some errors in the displayed decoded comm data, such as 127.85 for Newark Tower, but displayed as LaGuardia Approach. There are also some warts with the current software, including a known issue where the GPS receiver can lose lock after the first 10 minutes, go into coast mode and reconnect a short time later.

Some navigational waypoints present in the GNS530W and in the ForeFlight app are inexplicably missing from the IFD540 (I found several in New York airspace alone). I also found that its extremely easy to accidentally clear a waypoint from a flight plan by tapping the CLR key inadvertently, especially in turbulence. Zooming the IFD540 via the bezel dial is oddly opposite from zooming the EX600 map, which is downright maddening when the Avidyne units are adjacent to each other.

On occasion, AIRMET boundaries would not appear on the map, except at certain zoom levels. Finally, there is a large discontinuity in the backlight-going from medium to dim with no linear control.

Avidyne said it will be releasing version 10.1 software in the spring, which will contain various fixes and enhancements, although it didnt say exactly what it will include. The no-charge USB firmware update must be done by an authorized dealer.