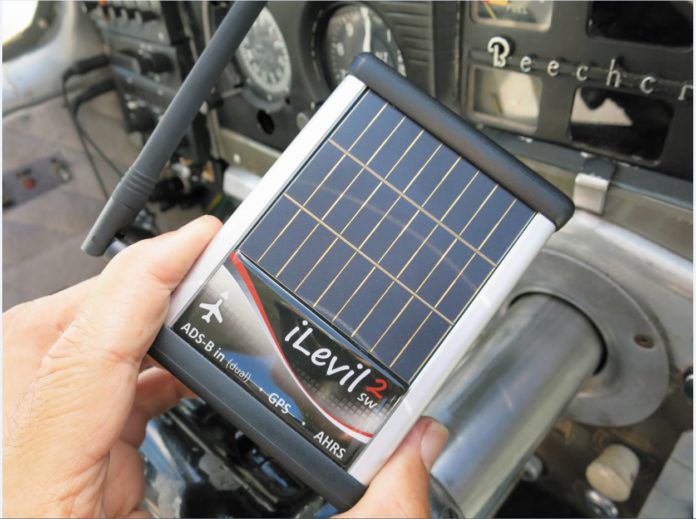 While portable GPS enjoyed a rousing market for more than a decade, portable ADS-B hasn’t been quite so impressive. The technology is mature enough that new products either fix bugs or show incremental improvements and the latter defines the latest portable from Levil Technology, the iLevil 2 SW.

Levil was an early entrant into the ADS-B portable segment with a small, battery-operated device that held its own against competition from Sagetech, Appareo and eventually Garmin. Levil’s first product, the iLevil, received FIS-B weather and single-channel traffic from nearby aircraft using the 978 MHz protocol.

The company’s newest model, the $1195 iLevil 2 SW ups the ante, but only by a couple of chips. The company claims better performance in a slightly larger unit that’s also three ounces heavier. As consumer electronics companies tend to do, Levil has held the line on price against the previous model. For apps, you can find iOS and Android products compatible with the iLevil 2 SW.

The iLevil 2 SW swims in the top tier of ADS-B portables, meaning it has what has become standard features: ADS-B FIS-B reception combined with a remarkably capable AHRS unit that outputs attitude,

If you’re really hard over on having the air data, Levil Technology has the iLevil 2 AW which, at $1395, has pitot-static input and can display indicated airspeed and pressure altitude. However, it will require breaking into the airplane’s plumbing and running some tubing into the device. In addition to being a regulatory grey area, that may be more trouble than many owners want to bother with for a portable. But it is unique to Levil products and is certainly suitable for experimentals and LSAs.

Also unique is a small solar panel atop the unit, which Levil claims extends the battery life by about an hour. Battery life is claimed at five hours, but we weren’t able to test it to exhaustion nor can we confirm that the solar panel extends battery life by as much as Levil says. One thing we are sure of is that on a warm day up on the glareshield, the entire unit gets quite warm to the touch, a characteristic it shares with other products of this type, especially the Sagetech Clarity models.

The iLevil 2 SW includes an onboard WAAS GPS with an internal antenna and an external rod antenna for the ADS-B. So if your tablet isn’t equipped with its own GPS, Levil has you covered. It communicates with the tablet (or phone) through a Wi-Fi node that proved robust in our flight trials. The node will support up to 10 devices, so your passengers—if they have the apps—are free to use it.

Speaking of apps, the iLevil supports 11 iOS apps and six Android apps. The biggie for iOS is WingX Pro and there’s limited support for ForeFlight, not to include weather. As we’ve reported, ForeFlight is somewhat exclusively locked into Appareo’s Stratus. (For a review on the latest version of that, see the September 2015 issue of Aviation Consumer.) Levil also offers its own free app, an AHRS utility, and although the price is right, it only displays AHRS info; no weather or traffic. For traffic, you’ll need one of the other apps and with those, you’ll be able to see traffic broadcasting on two channels, the 978 MHz boxes being queried by other UAT units and ATC and 1090 MHz extended squitter Mode-S transponders. For that reason, you tend to see a lot of high-altitude airline traffic and some—but most assuredly not all—of the nearby low-altitude traffic that you really want to see.

If you’re looking for an argument to buy ADS-B Out, the fact that it will assure receiving the full ATC traffic package might be the best one. A portable may or may not figure into that buying decision.

The iLevil’s onboard AHRS senses roll, pitch, magnetic heading, rate of turn and also has G-meter output for those apps equipped to display it.

Rigging the iLevil for flight doesn’t involve much. If you want to go solar, find a place where it can see sunlight and switch it on. The wireless immediately comes up and once selected from the settings page, the tablet is talking to the iLevil. The device can be operated on ship’s power and it’s shipped with a dual-port 12-volt-to-USB converter intended to power both the iLevil and a tablet. For longer flights, that may be worth the trouble of the cockpit spaghetti fest. Otherwise, five hours of operation may be sufficient.

We tried the iLevil 2 SW on three local flights and found it quite unremarkable, in the sense that it performed basically as the company claims and it’s consistent with competitors from other companies. Propped on the hatrack of the Cub, it had no trouble locking on to both GPS and ADS-B signals. The latter is spotty until airborne, but it seems robust even before reaching pattern altitude.

Perception of how well portable ADS-B performs is colored by the app or tablet used. We piped the output into an iPad Air 2 using iOS 8.4.1 and Levil’s own AHRS utility plus WingX Pro. As promised, we found good GPS performance and traffic and FIS-B availability. Levil claims that the iLevil 2 SW has more sensitive ADS-B and GPS receivers, but we have no way of measuring this. The previous model performed with no complaints nor any drop-outs and so does the improved model.

For experimental and light sport aircraft, in addition to the pitot inputs, the iLevil 2 AW has two serial outputs. These can be used to display engine operating data and to drive an autopilot with AHRS output.

The chart on page 20 puts the iLevil series in feature and price context with other options. Pricewise, it’s competitive with the Sagetech Clarity but higher than the Appareo Stratus 2S and Garmin’s GDL 39. In a future issue, we’ll do a side-by-side fly-off of all the ADS-B portables. For now, the iLevil 2 SW and AW are competent products that perform well, in our estimation.