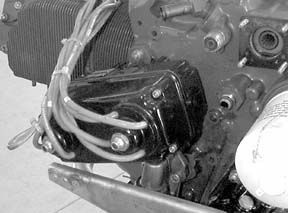 Thats what most maintenance-savvy owners say when they have anything to do with the Bendix D/2000/3000 series magnetos found on some Lycoming engines.

The problem with these magnetos is their basic design: The entire shooting match is in a large, single housing driven by a single shaft, somewhat defeating the point of having redundant ignition in the form of two entirely separate mags driven by separate shafts.

In general, these mags have delivered decent service but lately in our shop and others weve contacted, weve noticed a disturbing trend: The magneto is clamped with two hold-down blocks each secured by a single plain nut. There are a number of instances where these nuts have loosened, causing the mag to rotate out of timing or fall entirely off the engine.

Rough Engine, Oil Leak
A dramatic case of this came to our attention last month when one of our ferry pilots was flying a Mooney 201 from the Midwest to our shop in southwest Florida. He called in at his first fuel stop and complained of a rough running engine in the pattern during landing.

He reported that the engine ran fine at high power but also mentioned that the 200 HP Lycoming consumed about two quarts of oil in an hour or so of flight, something unusual for that engine.

We recommended that he remove the cowl and inspect the engine for anything obvious. When our pilot called back about an hour later, we learned that he found something obvious alright:

The Bendix all-in-one magneto was clinging to the engine accessory case with only the final few threads of its nuts and studs engaged. The entire mag could be easily wiggled in its mount and, of course, there was oil everywhere, which explained the high oil consumption.

Since ferry pilots are careful about strange airplanes, the engine compartment had been given a once over just a few hours previous to this incident. The mag appeared tight. When it was snugged back down and the engine retimed, our pilot completed the trip uneventfully.

Both the larger and heavier, dual all-in-one Bendix D-2000/3000 Mag-and even the single mags-are driven by gears inside the Lycoming rear accessory case, which is lubricated by the engine oil supply. Once a mag becomes loose, it no longer provides a good seal to keep oil from splashing out at the mating surface on the engine accessory case.

Once the mag falls away far enough and the gear becomes separate or fails to mesh with the accessory case drive gear, the mag will quit turning and thus, cease to generate spark for the plugs to fire.

Typically, the engine may run rough just seconds or even several minutes prior to the mag actually separating. We surmise this is because of timing being off spec and/or the lack of proper ground between the mag case and the rest of the engine once the mag becomes sufficiently loose.

How Common?
This is not the first time weve seen a Bendix mag loosen up in flight or found one that was about to let go in the course of doing a routine annual. Our shop deals only in Mooneys and we see hundreds of Lycoming engines a year.

The Mooneys Lycoming IO-360A3B6D isnt the only airframe that used the Bendix combined mag. The engine is found on some Piper products, as well. However, according to Lycomings review of service difficulty reports, Mooneys seem to uniquely suffer the mag drop off problem. We have a theory on that, which well get to.

The Bendix mag problem has lead to at least two accidents that we know of, although the NTSBs database doesnt reveal a developed trend in accidents caused by mags coming loose.

We know of two, one which occurred in the Everglades recently and another in 1996, in Lubbock, Texas. In the latter accident, a J-model had just departed Lubbock when the mag came adrift. It landed in a cotton field, damaging the landing gear.

Maintenance records revealed the mag had been overhauled four months and 120 flight hours previous to the accident and had been installed with the proper hardware.

Given our own experience with a handful of loose Bendix mags, we did a phone survey of five other Mooney and engine shops in various parts of the country. Between the six of us, we were able to cite 10 such occurrences in the last year or so.

In fact, Charlie Melot at Zephyr Engines in Zephyr Hills, Florida, told us several Mooney engine customers with D3000 mags demanded that he double nut the hold down studs, something thats technically not approved but is probably wise nonetheless.

The problem with the Bendix mag is not the magneto itself but the way its fastened to the engine. Typically, in aviation very few plain nuts are used without some type of locking device such as an internally locking star washer or a split ring lock washer. In critical applications, nuts are also safety wired. While some engineers may argue the point that a properly torqued nut needs no locking device, most mechanics believe either a lock washer or self-locking nut is a must.

A self-locking nut does two things: It doesnt work loose in the first place if properly torqued and if it does loosen, it does so very slowly. In any case, locking devices are meant to be used only once and replaced when the nut is removed and re-torqued.

What Lycoming Says
Rick Moffett, Lycomings chief engineer, told us the company doesnt believe theres a design fault with the Bendix mag hold-down system. However, he says because Mooneys are so tight to work on, mechanics may not be able to get a torque wrench onto the nut to tighten it according to specs. Without proper torque, he says any nut may work loose, let alone the plain nut used for the mag.

Further, were not convinced that mechanics always replace the one-time-use start washers, especially if they loosen the mag to make a minor timing nudge.

To actually replace the star washers requires first tightening either the upper or lower nut to hold the mag in place, then remove the other and replace the star washer, only to repeat it again on the other stud. And thats why we think Mooneys may be uniquely susceptible to mags falling off and other models arent. Mechanics simply arent replacing the lock or star lock washers because its too much of a nuisance. Moffett says that after talking with his field reps, Lycomings consensus is that theres no mental trigger to replace the star washers.

AD Needed?
While were not convinced that the mag issue rises to the level of an airworthiness directive, Mooney Owners of America (www.moapilot.com) has asked Lycoming to consider a service instruction or bulletin to allow the use of a 5/16-inch steel self-locking nut (Lycoming part #STD 2233) in place of the plain or nut currently in use for the Bendix magneto.

Further, says Moffett, the issue of proper torque will be addressed and that excluding finding any other technical issues to the contrary, a self-locking nut and a flat washer will probably be allowed, at the mechanics discretion. He told us the service bulletin or instruction may be disseminated within a month or two.

Meanwhile, we think its worth every owners effort to have a mechanic inspect the magneto for security and proper torque on the hold-down nuts. Checking the timing and putting new star washers on wouldnt be a bad idea, given the trivial cost.

Last, be suspicious of any rapidly developing oil consumption. For the Lycoming 360-series engines, a quart per five to 10 hours is normal but a quart in two hours is not. An oil leak caused by a loose mag may or may not deposit visible oil on the belly. Remove the top cowl and lay hands on the mag; if its loose, youll notice.

One other fix worth considering is converting the engine from the all-in-one mag to conventional dual mags, which the 201 and other Mooney models are actually certified to use. The Lycoming IO-360A3B6-no D suffix for the Bendix mags-can be used in Mooneys.

With the exception of the accessory case, its identical to the engine fitted with the all-in-one Bendix mag.

Obviously, the time to convert to this engine is at overhaul, when the cost of doing so will be minimal. (STCs exist for the conversion but technically, for J-models, they shouldnt be needed.)