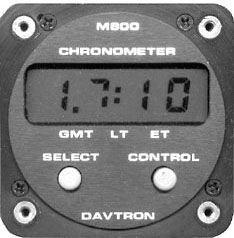 Although we wouldnt be true aviators without our impressive and capable Breitlings strapped to our wrists, these arent enough to comply with the regulations. Panel clocks are still a must.

The odd thing is, from both the avionics shop and the owners point of view, theyre nothing but a nuisance. We often scour every nook and cranny of instrument panel space in search of a spot to relocate switches, install GPS CDIs and annunciators and the only possible spot on the panel is occupied by the old clock/timer.

It may not even work so when it comes time to replace it, most owners hate to spend money on it. Nonetheless, and somewhat surprisingly, there are more choices in hardware than one might think and even more choices when it comes to the interface potential.

Sophistication? Yes
Also surprising is the amount of automation you can create in the cockpit with some of these units. Perhaps you want to interface the timer to a remote sonalert to warn you when a tank is about to run dry or you may just want a basic count-up timer to time your approaches and holding patterns.

You might want an old fashioned style mechanical clock with sweep second hand or a digital unit that measures in UTC, local, 12- and 24-hour formats and automatically starts counting on departure and stops when you touch down.

Panel Space
The space requirements for most aircraft clock/timers is generally a 2 1/4 -inch round hole, with minimal depth. When all else fails, you might be able to mount the unit in the control yoke. This is common on many Beechcraft models and often the only alternative when undergoing a major retrofit, especially when installing back-up gyros, GPS indicators and engine monitors.

Davtron
Davtron has been popular in the aircraft clock business for as long as we can remember. They also manufacture a full line of outside air temperature instruments and other devices such as DVORs, digital ADF tuning readouts and density altitude units.

Top of the line is the M811 series of clock/timer. This three-in-one digital clock, flight-time recorder and elapsed-time meter has been selected by more than 15 aircraft manufacturers as standard equipment. Its capable, but at first glance this instrument can be intimidating and its no surprise that we cant begin to operate one without a manual.

The unit is a 2 1/4-inch clock mount and has three independent 24-hour six-digit (hours, minutes, seconds) timing circuits which allow flight timing that activates on takeoff when interfaced to a squat switch. The unit is available in 12- or 24-hour time formats and has black or grey faceplates.

The display is a bright incandescent type with a dim position for night flying and the controls, mini-toggle-switch-like, are high quality with a positive feel.

The only aircraft power interface required is for lighting the display. All other functions are controlled with an internal battery. This is a very capable and high quality instrument but sadly, it rarely gets used by many pilots because they dont know how to operate the darned thing. If you have one, spend some time with the manual and youll be amazed at its capabilities.

The Davtron M877 series has UTC, local time, a flight time recorder and an elapsed time counter and, with only two buttons, seems simpler to operate than the 811. It also uses a bright incandescent display and has auto dimming for night ops.

The elapsed time counter can be wired to drive an external sonalert. Grey face is an option and the unit fits in a 2 1/4 -inch cutout. The Davtron M800 series uses an internal lighted LCD display so placement within the pilots direct vision is best.

Time formats are in UTC and local time and the unit also has elapsed time count up/ down with provisions for alarm output to a sonalert. The lowest priced of the Davtron line; the $165 M800, is also offered in Mooney and Beech yoke mount series.

Another option is the Davtron M803 combination clock, timer, outside air temperature and voltage monitor. The clock measures in UTC and local time, has a flight timer with flight-time alarm, elapsed time with count up/down with alarm output. It also measures temperature in both Celsius and Fahrenheit scales.

We like the voltage monitor and the display is easy to read. This is perhaps the most expensive of the clan to install due to the temperature probe and external sonalerts.

Any of the Davtron products will serve you well, in our estimation, with excellent factory support. Any time weve needed wiring diagrams or technical advice from Davtron, theyve responded with a smile.

AstroTech
AstroTech is also a familiar face in the panel. The signature black clock with red buttons is found in aircraft of all types. The most popular, the four-digit LC-2 chronometer, has selectable 12- or 24-hour format clock and 24-hour elapsed timer with date on an LCD display with internal lighting. The LC-2 is available with internal AAA battery power or a model that can be powered by ships voltage.

The unit is simple to operate with three push buttons. Models of the LC-2 are available for Piper and Beechcraft control- wheel mounting and also with 5-volt internal lighting for heavier aircraft applications.

The LC-6 goes a step further by providing a six-digit display with UTC and local time formats, 100-hour remote activated flight timer, elapsed timer and a down counter with outputs to an external sonalert. This unit has internal power from an AAA battery claimed to provide two years of keep-alive.

The LC-8 is a top-of-the line chronometer with a 24-hour clock, elapsed up and down timer with alert output and flight-time alarm with the ability to simultaneously display elapsed time. The LC-8 is powered by the aircraft and has an internal keep-alive battery. We mainly see the LC-8 installed in factory-new aircraft. Considering this, we expect increased after-market interest in the future.

A common problem with the LC-2 is inoperative buttons. The display usually keeps running but the buttons quit. We wonder if the buttons have a given useful life and after a certain amount of time simply stop working.

The fix? Either buy a new unit or send the broken one back to AstroTech for a very reasonable flat-rate repair/exchange. In either case, all units get the job done and the biggest decision is to go with internal battery or hardwire to the aircraft.

Mid-Continent Instruments
Yep, these guys make clocks too. The same quality and engineering found in the companys indicators is apparent in the design of the MD-90 aircraft clock. The MD-90 series is a solid-state quartz mechanical clock with an option for elapsed time hands.

If you prefer a mechanical clock to the other digital design units, the MD-90 is FAA/ PMA-approved and is standard equipment for some major aircraft manufacturers. The unit is a 2 1/4 -inch mount and is available in lighted or non-lighted versions. In our estimation, this is a great alternative to original equipment wind-up clocks and old mechanical models that quit working 20 years ago. And as we note, the MD-90 has a professional look and feel and has been a very reliable performer.

Electronics International
This maker of 2 1/4-inch round engine monitoring/analyzer devices also makes a similarly designed timer, the SC-5 Super Clock. The unit is a full-function clock/timer that measures local and UTC, with a count up and count down timer. It has an engine timer that can act as a pseudo Hobbs meter that starts counting when the engine starts, if wired to do so.

A recurring alarm may also be programmed, which will alert at time intervals. For example, you can set the alarm to warn you at 30-minute intervals to switch tanks. Visual warning lights are built into the indicator (up/down) that flash when the count up or count down timer times out.

Another version of this unit, the ASC-5, has altitude management functions and shows pressure altitude read from the blind encoder and it has level-off alarms that warn when you are reaching designated altitudes, MDA, gear down altitudes and so on.

If youre looking for a basic altitude management system, this unit is a good choice in our view, with its clock and timer functions as a bonus. Theres also an option of adding voice annunciation to these units for airliner-like automation.

Pretty cool, but pretty pricey, too with the basic Super Clock priced at more than $300, not including installation. But you get a lot of neat tricks including engine time recording. And while it can help manage single-pilot operation in a complex airplane, the ASC-5 is perhaps the most impressive and most useful out of any of the bunch and certainly less expensive than other real altitude management systems.

Conclusion
Face it, its difficult to get excited about clock/timers. But since you have to have one, why not get a decent one? And when some of these are interfaced with other boxes, you add another level of automation to the cockpit that might reduce workload and ultimately avoid trouble.

Any of the units mentioned will do a good job for timing and some have bells and whistles that probably really arent necessary. In our estimation, Davtron offers the most choices and all of them are high quality.

While its convenient to have a timer trigger an external alarm to remind you to switch tanks, for example, we doubt its really worth the extra dollars and effort to complete a complex interface in simple airplanes.

For basic airplanes, its a better idea to invest the money in the Davtron unit that provides outside air temperature and voltage along with clock/timer duties.

Better yet, if your aircraft allows, get a clock that will mount in the control wheel and save valuable panel space if thats your ultimate goal. The down side? Your approach plates and charts will cover the clock. In either case, it keeps you legal and hopefully on time.