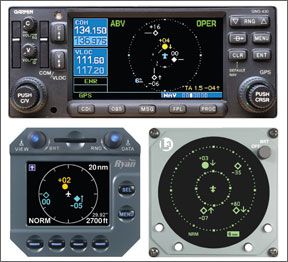 r of a mid-air collision ranks high on the demon list for many owners-high enough that theres a lively market in panel-mounted traffic systems that cost the better part of $20,000 or more to install. Theres also intense competition in the field, leading us to ask if one system is really better enough than another to recommend it over its competitors.The short answer is that performance doesnt drive the traffic box choice as much as price and display preference does. All of the systems weve tried adequately do the basic job of seeing threatening traffic and although none have a perfect record of seeing every threat airplane, we didnt see

enough difference between the products to recommend one over another solely on performance.

We tested panel mount traffic systems against each other as part of the roundup of portable traffic squawkers that appeared in the September 2007 issue of Aviation Consumer. For this report, we didnt specifically test the Bendix/King upper tier system (KTA-870), but we have flown with it and the KT-73 system in the past. The active KTA-870s performance is comparable to the Skywatch and Avidyne system and the TIS-based KT-73 works about as well as the Garmin GTX330.

Our exhaustive trials of all the portable traffic systems revealed that they are surprisingly good performers. To be sure, they dont see all the traffic and because theyre passive listeners, they depend on nearby transponders being illuminated by either ATC radar or another active traffic system. Fortunately, theres enough of each out there that transponders are always replying, so a passive system has a good chance of hearing anything nearby.

But “most of the time” isnt the same as “always,” hence the popularity of active panel-mounted systems. Active systems are of two types: self-contained, dedicated traffic systems that do their own interrogation on the same principle used by top-tier TCAS systems in airliners and the TIS-based (FAA Traffic Information Service) concept. TIS-based systems arent really active but are something in between active interrogators and passive listeners.

The TIS system collects traffic data from FAA radar sites and broadcasts it through a Mode-S transponder link to equipped aircraft within a defined service area. All the processing horsepower is contained in the ATC facility providing the service and it tracks only targets within its coverage area. Two products utilize this service, Garmins GTX330 and Bendix/Kings KT-73 Mode-S transponders.

Both work the same way, receiving the ground-based data from the ATC facility and displaying the results on a discrete display, either one of the Garmin GNS-series navigators or a multi-function display. TIS is an effective system but, as weve reported previously, the FAA is slowly phasing it out as it upgrades to ASR-11 terminal radar, which wont have the TIS module and thus no TIS service. (Several radar sites have already been phased out.) Furthermore, TIS works only in those area served by the terminal radar; if the Mode-S transponder cant receive the ground signal, it cant display traffic.

But true active systems-L-3s Skywatch, the Bendix/King KTA-870 and Avidynes TAS series-do their own pinging of nearby transponders, just like the TCAS systems on which they are modeled. In theory, this means active systems should see every transponder-equipped aircraft that might be a threat. The reality is that they fall a little short of that, although not much. If you opt for any of the active systems, youre probably doing all you can do to avoid a surprise paint swap.

We flew with all of the portables and three of the active systems-the Skywatch, the TIS-based Garmin GTX330 and the SKY497 from L-3. As explained in the September 2007 report, we hoped to use the panel-mount systems as truth against the portables, which either dont report azimuth and distance, or do so with limited accuracy. Thats less a complaint and more a limitation of portable technology. We wouldnt reasonably expect an $1800 portable to perform as well as a $20,000 panel system.

The portables missed a lot of traffic but, surprisingly, the active panel mount systems missed their share, too. This, we believe, is due almost entirely to antenna shadowing when the target aircrafts aspect is such that its hidden from direct line-of-sight of the traffic systems antenna. We noted that this occurs in turns and occasionally in straight-and-level flight.

In one test run, we approached an Archer equipped with Skywatch from behind and below. Nominally, the system should acquire at 10 miles, but it acquired well inside that range and then dropped and reacquired a couple of times. Avidynes TAS system exhibited similar dropouts, even though it has two antennas, one on top of the airframe and one on the belly. We couldnt put a number on the difference between the two, but neither saw every target every time. But both saw the targets in plenty of time to allow visual acquisition.

The TIS-based Garmin GTX330 had no dropouts that we could detect. Further, it detects targets reliably at greater range than do the other active systems because it relies on ATC radar that can see targets within hundreds of square miles of airspace. The TIS range display is nominally 7 miles, but the system can see targets beyond that range. Our trials showed that the GTX330 would almost always track targets at the very edge of the display range and these would rarely drop out. The same can be said of the other active systems. TIS symbology includes a small vector line that gives some sense of target direction, based on ATC tracking data. The other active systems lack this useful feature.

One disadvantage of the ground-based TIS system is target lag. Because theres a delay in receiving and processing the target data, the azimuth and range of TIS targets is often latent and target jump is noticeable. The Skywatch and Avidyne systems dont exhibit this. But were not convinced that TIS range and azimuth latency is a significant issue because by the time the range has closed enough to make a difference, your eyes should be outside the cockpit. Target jump notwithstanding, we noted that when the active systems do track a target-TIS included-the initial range and azimuth appear to be spot-on accurate. For instance, when the Skywatch-equipped Archer reported us in the 5 oclock position at 3 miles, thats where we were. The TIS had the Archer at 10 or 11 oclock at the same range. But we give the Skywatch and Avidyne system an edge in accuracy and response times. Here are some pros and cons for each system.

Overall, this is the least expensive and potentially easiest to install, although the dual antenna requirement may increase installation complexity. The TAS600 is an entry level system that gives owners of modest aircraft something they didnt have before: active traffic at an affordable price. On the downside, owners of airplanes certificated to fly above 18,500 feet will probably have to pay for the more expensive TAS610.

Display wise, the TAS series can have its own 3-inch dedicated ATI display or it can display on Avidynes EX500 and 5000 MFDs, Garmins GNS-series navigators, the MX20/GMX200 MFD and the Bendix/King 250/550/850 MFDs. These choices offer significant flexibility. Also, the TAS series will display squawk code and N-numbers from Mode S-equipped airplanes. These features, along with its reasonable price and audio callout features, make the TAS series our top choice for value versus performance.

At $25,000 retail, this dual-antenna system is top tier, probably better suited for turboprops and jets, unless the owner of a lighter aircraft already has Bendix/King equipment, especially the displays. Like the Avidyne, it has an upper and a lower antenna, but unlike the Avidyne, the antennas have to be positioned in near perfect vertical alignment and antenna cables have to be within 2 inches of the same length.

Both it and the Skywatch system require external heading input from a bootstrapped HSI. (The Avidyne doesnt.) Both the Skywatch and Bendix/King systems have fairly large remote boxes; the Avidyne is more compact. With its ARINC 429 output, the KTA-870 is flexible in display options. It will play with any of the major MFDs, including Garmin navigators.

L-3s Skywatch was the first active system for light aircraft and remains the top choice for many owners, despite its high price. Its featureset is similar to the Avidyne, with good audio callouts and a range of display options.

The Skywatch does something the others dont, however: It will play on WX-1000+ Stormscope, offering the option of toggling between a seldom-needed weather display and an always-needed traffic display. In a space-challenged panel, this can be both a deal and a money saver. Having evolved from the airline world, the Skywatch box is both robust and fitted with heavy, high-quality plugs, which bodes well for reliability.

Both Garmins GTX330 and Bendix/Kings KT-73 are good performers at a fraction of the cost of full-blown active systems. As noted in our trial notes, they work well in those areas covered by TIS, but not at all where coverage is lacking or marginal.

We wouldnt diss these systems entirely, but because of the uncertain future of the TIS network-ADS-B will supplant it-we wouldnt recommend either just for traffic capability. However, if you need a new transponder and want Mode-S capability, the TIS option is a nice-to-have perk, even if its days are numbered.

Our take-it-to-the-bank top choice is the Avidyne TAS series. These products are well designed, easy to use and have the fewest installation hassles, all for prices below the competition. We dont see anything not to like about this combination.

Another on-the-horizon choice we havent tried in detail is the ADS-B-based GDL-90 from Garmin. Although this technology is promising, our view continues to be that its too soon to buy it. The FAA has committed to the build-out of the required ground network, but its not built yet. Well revisit the topic in a couple of years.