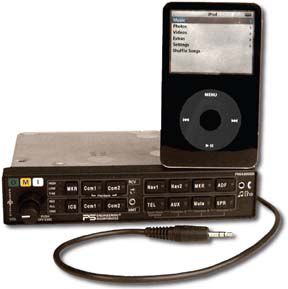 In the fuzzy world of marketing-and that includes avionics marketing-its axiomatic that features sell a product. Stripped down basic products, no matter how cheap, are often poor sellers and dont deliver much margin for the manufacturer. Its true in cars, computers, cameras and consumer electronics. Its no surprise then that a company taking on the likes of Garmin International will cram more features into its products than you ever thought possible.

Thats exactly what PS Engineering has done in its new PMA8000B audio panel. In fact, this thing has so many high-scale features that we initially snickered at it. But closer examination reveals that its a remarkable performer from a company with a strong reputation for quality and service after the sale. Its more than a worthy competitor for the Garmin GMA347 we reviewed in the May 2006 issue of Aviation Consumer.

Cutting Edge
PS Engineering lives on the cutting edge of audio technology as evidenced by the proven IntelliVox automatic squelch intercom technology and a long list of other patented developments that play out in unique features on PS audio panels and intercoms.

PS proudly wears the title of aircraft audio pioneer and aggressively pursues the top place in industry sales numbers. According to recent surveys, it enjoys well over 50 percent of audio aftermarket and OEM sales. Raytheon Beechcraft, Columbia Aircraft and Maule are companies that equip new airplanes with PS Engineering products.

The PMA8000B can be considered the flagship audio control system-they also make a PMA8000-SR model equipped with onboard Sirius satellite radio-and many of the products features carry over from other successful models.

The PMA8000B is a plug-and-play replacement for an existing Garmin GMA340 audio panel, so owners of these boxes can make the switch to the PMA8000 series with little rework. (As we said, PS is serious about competition and goes toe-to-toe with Garmin at every turn.) Our test of the PMA8000 was in a D-model Baron equipped with Bendix/King KX170B radios, but with recently retrofitted audio. We found overall performance and audio quality to be exceptional, in the PS Engineering tradition.

IntelliVox technology uses three independent signal processors that sample ambient noise at each microphone connected to the intercom. Only voice is heard and absent is the annoying breathing hash and cabin vent noise that opens the squelch on some intercoms. It really is intelligent technology and PS Engineering has it nailed.

Button nomenclature and overall ergonomics are good, with green LEDs indicating which audio source is alive. New on the PMA8000B is a bezel-mounted 3/32-inch utility input jack for plugging in remote devices such as a CD player, XM radio or iPOD. This is where the PMA8000B gets interesting, but also somewhat confusing for first-time users.

High-Level Entertainment
The utility jack is designed for cellphone input, music input to the intercom and advisory audio sources such as a portable traffic device, for example.When you plug a cellphone into the jack-an adapter may be required depending on the model of the phone-the system automatically configures for the telephone and pressing the TEL button allows full duplex operation.Interestingly, the phone ringer can still be heard through the audio system, even if the TEL button is off.

But it gets more interesting when a remote entertainment device is plugged into the utility jack, or remote input jacks controlled by function keys on the units bezel. These control who hears what and when….stay with us here.

These so-called Smart Function Keys are controlled using the TEL, AUX, MUTE and SPR buttons on the bezel and allow custom configuration of music input and intercom distribution.

Function B allows flexible distribution of music input, sending the music to all passengers independent of the intercom privacy setting (crew, ALL and so on). What this really means is that a single entertainment source can be used and distributed to front and rear cabin as appropriate.

What were really talking about here is a kind of sophisticated audio mixing board for the cockpit and a functionality thats a step above the music input capabilities of the Garmin panels. Is there really a crying need for this capability? Typically no, although a small fraction of high-end users may want it. We suspect as in-flight entertainment really catches on-and it appears to be-these features will be more valuable.

Function C allows music control similar to the Garmin panels, where the passengers hear the music only when they arent hearing the crew. Function C also allows passengers to hear music all of the time, independent of the crew who might be listening to different music sourced through input one.

On top of all this, theres also a MUTE key, which will mute the entertainment input when intercom conversation and radio action is present.If weve confused you, frankly, weve confused ourselves, too. But if you can master all this complexity in an audio panel, its there for the taking.

Virtual Tech Support (VTS)
Recognizing that this over-the-top complex music distribution flexibility might cause some issues for pilots who have trouble operating the Direct-To button on a GPS, PS Engineering has designed what they call VTS or Virtual Tech Support into the PMA8000B. This is voice-prompt help to assist in understanding the mode the distribution functions are set to or will be set to. PS stresses that none of the Smart Function Key settings we described above will affect the basic operation of the audio panel but are limited to how the entertainment is directed within the cabin. This is important to remember; you cant really screw up the basic communication audio flow.

Still, we think the VTS is handy and after some playing with it, most users should adapt to the entertainment configurations.

As with the GMA347, the PMA8000B has a split mode so the pilot can transmit and receive on comm 1 while the copilot can work comm 2 at the same time.

We find more pilots interested and actually using this function, checking in with the FBO or Flight Service while the other pilot works ATC. The caveat is that there must be separation between both comm antennas, otherwise bleedover of adjacent frequencies will cause interference. Our experience is that in smaller aircraft with antennas mounted in close proximity, one must be on the top and the other on the bottom of the fuselage.

A remote transmit swap mode-another feature pioneered by PS Engineering-allows selection of comm transceiver 1 or 2 and vice versa by pressing a yoke-mounted switch, eliminating the need to remove white knuckles from the yoke to reach for the audio panel. In some aircraft, this interface can get pricey because autopilot mode switches and Stormscope clear buttons take up available yoke wiring potential.

For basic intercom separation, there is ISO (pilot isolation), CRW (crew mode) and ALL (everyone on the intercom) mode buttons. And when the PMA8000B is switched off, it becomes fail-safe, with the pilot automatically connected to comm 1, in case of system failure.

IRS (Internal Recorder System) is a digital recorder with 30 seconds of recording time. No action is needed to begin recording-simply press comm 1 and comm 2 buttons at the same time for a loop playback. Very easy, very practical.

Conclusion
We cant describe the detailed operation of every feature on the PMA8000B; it would take a book. In fact, youll just about have to read one in order to master this product. Which raises an important point: Has the design of this thing run amok? Is it simply an example of clever software and hardware solving problems that dont really exist?

To some degree, we would say yes. When Garmins GNS430 first appeared, it ramped up cockpit workload but only incrementally. You didnt have to go to night school to make it play. Glass panels are nearly an order of magnitude more difficult and demanding to operate and now comes an audio panel that needs built-in context-sensitive help. If this sounds like its getting to be too much, we think its getting close.

Nonetheless, for what its capable of, the PMA8000B, at $1995 list, is a heck of a good bargain. It packs both high quality and a ton of features into the most sophisticated audio system weve seen. But if theres a dark side to this, here it is: installation. If you hope to take advantage of everything the PMA8000B can do, brace yourself for a large invoice as the shop grinds through the wiring necessary to make everything work and sound right. Cheap the wiring job and itll sound awful, as PS warns in its installation guidance. A $4000 audio upgrade is not out of the question. Weve seen more than a handful of those. Adding to the cost is the need for high-quality ANR headsets to make the most of all the technology youre investing in the front-end audio. Theres no point in dumping a bunch of money into an audio system only to listen to it through a cheap headset.

Head-to-head with Garmins high-end audio panel, the GMA347, the PMA8000B comes out on top, in our view. It has excellent performance and more features-whether you use them or not-for $400 less. The strongest argument for the GMA347 is brand loyalty for those owners who still wish to have a stack composed all of one brand.

We think high-quality audio in the cockpit still hasnt quite come of age, although more owners are warming to the idea. If you fly a Bonanza or a Mooney by yourself or with just another passenger, you probably dont need distributed entertainment audio. A simple audio panel with a good intercom will do. In that case, our first choice is either Garmin GMA340 or the PS PMA7000, both of which are good performers for a similar installed price. As much as we like to test and report on high-end features, theres no point in paying for them if you dont have the need.