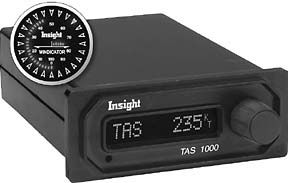 Pilots of jets have long understood the importance of air data systems, by necessity. On long-haul jet routes, engine performance is everything and getting the power levels right is critical to having legal reserves when landing 5000 miles away.

Jet systems collect or calculate all the important flight parameters-true airspeed, temperature, pressure, wind data and the like-and integrate it so pilots can use it. This integration typically comes at high cost and heavy weight and hasnt been a reasonable option for light general aviation aircraft until recently.

How It Works
The advantage of an air data system should be obvious if you have a GPS. A GPS typically has many functions that require manual inputs. For example, a GPS with no external data input requires entry of airspeed, heading, temperature, altitude and barometer setting if you wish to calculate true airspeed and obtain local winds aloft data.

Some small aircraft panel installations are partially integrated, meaning the GPS may have temperature or pressure data, but no airspeed or heading data. Some GPSs can also be configured to accept fuel flow information, but without air data, that information is of limited usefulness.

An air data system begins with a set of sensors to measure outside air temperature, pitot and static pressures, fuel flow and altimeter baro setting. Heading is obtained from a compass system-a Honeywell Bendix/King KCS-55A system will do-and track and groundspeed come from the GPS.

A typical air data box is hidden from view; its role is not obvious. The compound functions it supports are displayed on other equipment, say an MFD or GPS. Air data systems typically dont have dedicated displays. The Insight TAS 1000 is different. It does all an air data system can do, has its own display and an innovative device called a Windicator. A nine-place alphanumeric window displays about 40 functions.

For example, static air temperature can be displayed in Centigrade, Fahrenheit,both, or neither; and fuel can be measured in gallons, liters or pounds. Choose the functions and units and theyre then displayed with the twist of the TAS knob.

The large list of available functions is in the accompanying table. The Windicator is a dedicated display of wind speed and direction. Its a half dollar-sized display, only a quarter of an inch thick. It can be attached almost anywhere on the panel; even applied to the center of a DG or VSI glass. Two small wires connect it to the air data box.

If that sounds clever, it is: Using GPS and air data, the Windicator instantaneously shows how fickle the wind can be, especially when flying through a weather system.

Wiring It Up
Basic to an air data system is a common bus language. The Insight instrument uses RS232, so the data stream to and from the unit can be wired to any equipment that can accept this common protocol.

However, the abilities of another instrument to receive TAS 1000 data may be limited. For example, the Bendix/King KLN 90B GPS accepts heading, airspeed (pitot), fuel flow, fuel remaining and altitude via an RS232 port, but not barometer setting and OAT. However, the Insight instrument is not a blind box like most air data computers, so raw information and compound functions are available on its display, even if this data isnt sent off to other boxes.

The TAS 1000 has to consider different update rates of the parameters it receives. For example, ground track and groundspeed generated by a GPS may not be updated as quickly as heading information from an HSI. Typically, GPSs have long built-in delays in updating the wind vector they calculate. The TAS 1000 does its own calculation using raw data, so the wind vector displayed on the Windicator is closer to real time.

Wind shifts will be displayed within seconds, while a GPS may take longer to display new values. However, the limiting factor is how often a GPS outputs track/groundspeed to the TAS 1000. This is normally done at least once a second.

Installation
The TAS 1000 combined display and computer is a light 1-pound panel-mounted instrument.The current price for a TAS 1000 system including a Windicator is $4994 for piston aircraft. If the TAS cannot be piggybacked onto an existing fuel flow sensor, the cost of a sensory is $395. If the aircraft flies in the flight levels and has a speed over 250 knots, the TAS 1000 costs $7495.

A sophisticated unit for jet aircraft costs $9995 and displays power settings for climb and cruise based upon altitude, temperature and engine specifics. It can also be used as a required overspeed warning with a $495 expansion mode. Typically, fuel flow sensors can be tapped electronically if already in the aircraft, but static and pitot lines must be plumbed directly to the instrument. A dedicated outside air temperature probe is supplied with the TAS 1000 unit. Wires must connect the unit to a heading source, GPS and altimeter (for barosetting). If barosetting is not electronically available, the value can be directly entered into the TAS 1000.

Insight assists avionics shops by offering dealer kits with precision panel punches for the TAS unit and Windicator and a T-box. The T-Box is a diagnostic unit thats temporarily plugged between a TAS harness and TAS unit. It helps troubleshoot sensor faults and can create simulated inputs to check the functions of the TAS computer.

As an option, the TAS can act as an altitude encoder, relaying information to a transponder for Mode-C replies. Insight hopes to build upon its data systems and is developing an optional voice alert altitude encoder. This small unit is connected to the TAS 1000 and aircraft audio system. It will provide voice alerts in 100-foot increments during flight and on deviations from level flight. An approach mode will count down in 100-foot increments to a target altitude. Future TAS innovations may offer power settings-based upon altitude and air temperature-and aircraft configuration warnings for specific model aircraft. For two-pilot cockpits, a TAS repeater display may be available in the future.

He may be right, especially with light turboprops and jets making inroads into the general aviation market. That said, a TAS 1000 is perhaps not must-have equipment for the typical Skylane but it is affordable for a Skylane owner who wants the capability.

In the end, what the TAS 1000 does is tie together GPS, fuel computers and simple sensors into a system that gets the most out of each.

Ian Blair Fries is an ATP-CFII and an Aviation Consumer contributing editor.