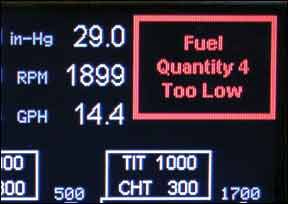 The reoccurring head-shaker in the NTSB reports is the pilot who wrecks a perfectly functioning aircraft because of mismanaged fuel burn. But the truth is that eventually even the most conservative gets tempted to push the envelope of fuel endurance. That’s why a fuel computer installation makes sense, and there’s one for every budget. Speaking of budget, fuel computers assist with miserly leaning—a real plus in the world of pricey low lead.

The crowded market for retrofit fuel computers is ruled by budget and panel space. You can choose a basic stand-alone model, add fuel capability to an installed engine monitor or  replace all the factory engine and fuel gauges with a big screen monitor that takes fuel computing to the highest level. No matter what route you take to computerized fuel management, don’t expect a trivial installation. The modification alters the fuel lines that feed your engine; this is not to be skimped on.

Here’s a rundown of what’s on the market, from low end to flagship, and what it takes to get one installed.

Arguably, fuel flow computers in fuel-injected engines display more efficient or more stable flow data than carbureted engines, which might fluctuate as the carburetor bowl empties and, although systems set up for a carbureted engine have a slower flow response time to reduce sudden fluctuations in readings. Transducers are designed to be fail-safe, and a stopped metering rotor will not interrupt fuel flow to the engine.

Cheaper computers require you to data-enter actual fuel quantity or confirm that the tanks are full at startup. Higher-end systems that digitally measure fuel quantity keep track of it for you. But in either case, initial system setup is critical for accurate data. This might also require calibration or replacement of senders and sensors in the fuel system.

Each flow transducer has what’s called a K factor. This is usually a four-digit number which represents the number of pulses generated per gallon of metered fuel flow, and the science to accurate fuel computer installations includes fine-tuning the K factor. Fuel hose diameters and lengths, elbows, fittings and routing on the engine can cause the true K factor to be different from what’s set from the factory. Further, it often takes additional work on your part after the installation to tweak the computer for the most accurate flow data.

To give you an idea, JPI advises to take three flights of about two to three hours each and then note the actual fuel used as determined by topping the tanks and the computer’s calculation of the fuel consumed for each flight. From there, you can manually change the K factor to a more accurate value based on actual flow and burn. It’s simply formulated by multiplying the fuel computer’s measured burn by the K factor and dividing by actual fuel used.

Entry-Level
Shadin Avionics, now owned by Cobham, arguably set the bench-mark years ago and still offers three proven, standalone models:  The Microflo L that fits in a two-inch instrument hole, the rectangular Miniflo L and the Digiflo L, a full three-inch instrument option. The L suffix on these systems stands for an RS232 serial connection between the fuel computer and the Loran, but carries over into modern-day GPS interfaces. Earlier Shadin computers only supported a one-way data stream and some didn’t have the capability at all. Have your shop check this if you are upgrading to a GPS navigator so they can have the Shadin upgraded, too.

The Shadin units calculate endurance or the time left to fly in hours and minutes based on the fuel remaining and the present fuel flow. An easy-to read digital readout indicates the fuel per hour to a tenth of a gallon up to 100 gallons. (It’s to the nearest gallon above 100 gallons.) When measuring fuel in pounds, it displays to the nearest tenth up to 999 pounds per hour and to the nearest pound above that.

All JP Instruments graphic engine monitors are capable of fuel computing when installed with a FlowScan transducer (a $600 option on the entry-level EDM700-series and standard on the 800-series). Fuel data cycles through with other engine data or a toggle switch can select a dedicated fuel display. The color EDM830 puts big screen engine display in a three-inch cutout-capable platform with data fields that can be configured to display fuel data as well as a dedicated fuel page. For four-cylinder engines, the EDM830 starts at $3795 with fuel interface—a good value, in our view. JPI also offers the economical $775 FS450, a two-inch round standalone unit with GPS interface. The FS450 has programmable alarms, prompting a flashing alert when the remaining fuel falls below the set limit. We give the FS450 high marks for ease of use and overall reliability.

Canadian manufacturer Insight Avionics offers the True Flow 500, a trickle-down product from the TAS1000 air data computer. This is a remote sensor computer that’s unique in that it doesn’t require a dedicated control head. Instead, fuel data is displayed on the fuel planning pages of a GPS navigator while the hardware is self-contained in the engine bay. The company’s G3-series 610C color engine monitor has an integrated fuel computer for totalizing and fuel flow display, and the unit is plug compatible with an existing GEM engine monitor.

The $1073 Electronics International FP5L series is a proven totalizer that has GPS interface and straight-forward user interface. The FP5 is available in a flavor that replaces a factory fuel pressure gauge when interfacing with the unit’s auxiliary input channel. Electronics International boasts manufacturing their own flow transducer that, according to EI, enables the instruments to display fluctuation-free fuel flow with instantaneous response to changes in mixture. The FP5 fits in a two-inch instrument cutout. EI also offers a standalone digital fuel quantity display, called the FL-2.

Big Screen Integration
Big-screen engine displays provide the means for displaying large amounts of fuel data in one convenient place. Systems approved for primary gauge replacement offer the benefits of displaying actual fuel quantity. A big player in big-screen engine data is the Electronics International MVP-50P, which we covered in the October 2010 issue of Aviation Consumer. As you would expect, it has multiple dedicated fuel management screens and takes fuel advisory to a higher level.

We think EI did a fine job of presenting fuel data in an intuitive manner, with color-coded fuel and time-to-waypoint endurance. The Fuel Level section in the display indicates the fuel levels measured in each of the available tanks with total fuel onboard displayed at the bottom. The MVP50 provides current fuel flow, fuel used for the trip (or fuel since the MVP was powered up), fuel used since fuel was added and, of course, the current fuel that remains in the aircraft. There’s time to empty based on fuel remaining and flow plus distance to empty based on GPS-fed ground speed. The MVP50 starts at $5995 for four-cylinder engines (TSO’d).

Ultra Electronics and their Auracle CRM 2100 single-engine and 2120 twin monitors offer an intuitive fuel data cluster for dedicated fuel computations. We like the at-a-glance flow bar that sits in sequence with engine power arcs on the instrument page, and the fuel data that’s conveniently laid out directly below the power arcs. If you’re looking at critical power data, you’re also looking at total fuel remaining, total time remaining and fuel reserve data (when connected to a GPS).

Additionally, a dedicated fuel page displays initial fuel, fuel at destination, amount of fuel used plus MPG for measuring efficiency and time to destination. We’re impressed with a streamlined installation of the fuel quantity interface of the 2120 twin monitor that utilizes the existing fuel quantity senders, include the resistive, voltage and the Cessna capacitive systems.

We think Auracle has the edge in nailing fuel quantity functions, given their experience designing solid-state fuel-monitoring systems for aircraft like the Piper Seneca V and Sikorsky Blackhawk helicopter. These applications, says the company, provided the experience to understand the nuisances of digitally monitoring fuel quantity and the inherent need to damp the signals. A Baron owner marveled at how stable the fuel quantity display is compared to the old bouncing Beech gauges. A major fuel calibration process was required at the time of installation, but the intuitive nature of the display and maintenance mode tames this dragon, saving some dollars.

The JP Instruments EDM930 packs the EDM800 engine monitoring capability in a total engine management system that’s approved for OEM gauge replacement. Starting at $5491 for four-cylinder engines with two fuel tanks, it includes digital fuel quantity measuring in addition to all the fuel flow computation you get with the EDM800. There’s also an option for fuel pressure. The 930 displays fuel data that’s range-marked and displayed along with other engine parameters in a color-coded bar graph with numerical values.  The EDM930 for twins starts at a whopping $14,562. Installation could send total price toward the $20K mark.

Conclusion
Fuel information is such an important piece of flight data we’re surprised that retrofit PFDs the likes of Aspen and Garmin G500 systems can’t tap into a fuel computer’s output and eliminate the fuel computer control head from the panel.

Until then, big screen engine monitors logically incorporate oodles of fuel data and the ability to measure real-time fuel quantity if you can swing the high buy-in cost. In that arena, we favor the Auracle for its streamlined installation and smart engineering. Electronics International’s MVP50 has a slight edge with its interactive trip and waypoint fuel minding.

For reliable and intuitive fuel computing that tags along with an excellent small-screen engine monitor, we think JPI’s color EDM830 system offers a solid value. Adding the fuel option to an entry-level EDM700 makes sense if you already have the monitor.

For standalone totalizers in singles, we like JPI’s FS-450 for its straightforward control head and overall reliability. That’s the way digital fuel management should be.