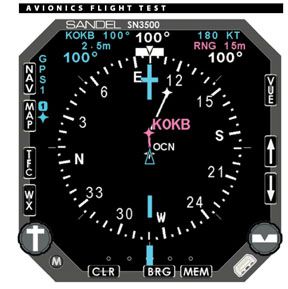 Upgrading to an HSI has never been easy or cheap. The choices are few and the costs are high. Typical of HSI shopping is the dilemma I faced last year. I traded up from a Cessna T206H to a Piper Mirage. The 206 was superbly equipped with Garmin navigators and a Sandel SN3308 EHSI, now discontinued after sales of more than 4000 units.

The Mirage had a conventional Bendix/King KCS55A HSI. I flew the SN3308 for five years and found that it gave good service. Although I did have to replace some bulbs and return the unit once for a new power supply, I never suffered a black screen in 700 to 800 hours of use.

So considering the new Sandel SN3500 for the Mirage made sense. Because I already had the KG102 remote gyros from the Bendix/King HSI system in the airplane, the cost of the upgrade was competitive with a new HSI.

FEATURES AND FUNCTIONS
Both the SN3308 and the new SN3500 are solid-state EHSIs with integrated circuits instead of mechanical guts, although both require external gyros which are still mechanical designs. The SN3500 EHSI has a 3-inch square (9 square inches) color moving map display that presents tons of information, including the CDI, glideslope, GPS data, speed, three-light marker beacon and WX-500 Stormscope data, to give the short list.

You can even connect multiple GPS and NAV units, which will display as GPS1, GPS2, NAV1 and NAV2. Whatever you select will then feed to your autopilot, so your EHSI is always synched to your autopilot. Although its more expensive and complex than a traditional mechanical HSI, the SN3500 clearly does far more.

The best feature of the Sandel, in my view, is auto-slewing. This allows the EHSI to automatically receive, display and sequence a GPS flightplan. For example, if youre flying a multi-waypoint GPS flightplan, the SN3500 will automatically make the changes as the airplane flies from one waypoint to another.

The SN3308 had similar features but the 3500 adds to the list. Foremost, it has an outstanding new display thats bright and easily readable in direct sunlight. The new display has a full 180-degree viewing angle (both horizontal and vertical), whereas the original SN308 had a limited viewing angle and appeared black to the co-pilot.

The 3500 also has a new arc lamp technology that lasts almost forever (2000-plus hours). To the annoyance of SN3308 owners, the original model required new bulbs every 200 hours or at each annual, but the SN3500 fixes that. Also new, the 3500 displays both traffic (TCAS, TCAD and TAS) and datalink weather.

The traffic and weather inputs requires a special software key that adds about $1500 to the price-$714 for each software key to be precise. The traffic option includes most types of traffic formats, but the SN3500 only accepts WSI weather, not XM-based formats.

LOTS OF INFO
The display can depict an incredible amount of information, including data from the following sources: compass system (directional gyro and fluxgate), NAV1 and NAV2 receivers, LNAV1 and LNAV2 receivers (GPS/FMS), DME1 and DME2, ADF1 and ADF2, marker beacon receiver and weather. It can also depict your flightplan, airports, navaids, intersections and airspace. You can choose as much or little data as you want. Your aircraft is indicated in the center of the display as a white airplane or triangle.

I especially like the color on the display, which the unit uses well, with nine different colors for various types of data. In the minds eye, green is good so NAV data is green (along with B and C airspace). Cyan is fairly innocuous and is the color used for map status bars and icons. White is a calm color, used for the compass rose, heading data, button labels and to/from indicators.

Yellow automatically suggests caution and on the SN3500, its used for invalid glideslope, restricted areas and warning areas. Amber is close to red, displaying GPS annunicators, gyro failure and fluxgate failure. As expected, red is bad, appearing for failed glideslope, CDI data or prohibited areas. Theres also magenta for the active leg of flightplans, blue for the outer marker and purple to depict MOAs.

BUTTONOLOGY, INSTALLATION
Display choices on the 3500 are made with an array of buttons. These are summarized on the graphic at left. As you might imagine, if youre accustomed to a mechanical HIS with just a heading bug, the SN3500 will require some time with the manual. Its operating logic isnt difficult to master but it works differently than the SN3308, something I was disappointed with. Why couldnt the two share identical operating modes?

Despite a few fellow owners questioning my sanity, I arranged to have the SN3500 installed in my Mirage before I took delivery of the airplane last December. I should have known better, but I went with a shop that had never installed the SN3500. But they had done SN3308s, so I figured installation would go smoothly. It didnt.

When I got the airplane back, even the basics werent working properly. For example, the course pointer pointed exactly 180 degrees from the correct course. Interestingly, the ferry pilot who delivered my Mirage didnt notice this, as he had never flown a Sandel.

Annoyed, I called the avionics shop and they were able to tell me how to correct the factory settings after 30 minutes of trial-and-error. But we werent able to correct other problems, including the GPS2 not being properly connected.

Several weeks later, I returned the airplane to the shop and they tried again to fix the problems. On my flight home, I discovered they hadnt succeeded. I contacted Sandel about the problem and they promised that the problems could be corrected, but the Sandel technicians arent authorized to perform avionics work.

Frustrated, I went back to the avionics shop and the third time proved the charm. I was told that connecting a GNS 480 to a Sandel as GPS1 and also connecting a GNS530 as GPS2 is a challenge. In fact, the Sandel technical representatives could only think of one other installation of such complexity. Id give Sandel lukewarm grades on customer support. We heard complaints from one other buyer similar to mine and thus we think the company could work on its responsiveness.

NITS
Nothing is perfect, of course, and my biggest complaint about the SN3500 is that it doesnt operate like the SN3308. When flying an ILS, the SN3308 automatically sets the inbound course so flying the ILS was a hands-free event. Not so with the SN3500. To my consternation, the SN3500 requires the user to manually set the inbound course for the ILS. In my view, this is a step backwards, but no fix is planned by Sandel, Ive been told.

My second complaint is that the new arc lamp technology is too bright at night. The SN3308 had a nice brightness adjustment knob installed separately on the panel. The super-bright SN3500, however, requires immediate delumination at dusk, which requires a complex button and knob combination. Again, Im not sure that the 3500 has evolved for the better in this regard. Automatic dimming would be a nice addition. But there is none.

Another nit involves the cost of including datalink weather and traffic. To add either, you have to buy an additional software key, which allows the SN3500 to interpret and display the weather and traffic data. Although these keys cost over $1500 each at the time of my installation, Sandel has recently reduced the price by more than half, to $714 each.

A similar nit involves the datalink weather option. Strangely, the SN3500 currently works only with WSIs weather products, although XM is the currently the most popular datalink weather service. Finally, Im disappointed that the SN3500 doesnt include a wind direction arrow driven by an air data computer. The King EHSI has it, but so far, the 3500 does not.

For me, the SN3500 has been worth the cost because I rely on it for so much data in one, easy-to-read instrument. Sandel claims that an EHSI is more reliable than a mechanical HSI and with the new improvements in the SN3500, this claim may be valid.

Compared to a traditional HSI installation, the SN3500 is not crazy expensive, given that it does so much more than the older iron gyros. On the other hand, with Garmin having announced the G600 EFIS system for the aftermarket, standalone EHSIs and AIs may be less attractive. If the G600 installs for, say, $50,000 or less, some buyers may follow the in-for-a-penny-in-for-pound strategy and go with a full glass panel. In two years, well know. In the meantime, buying an HSI is still not simple or cheap.

Lionel Lavenue is an attorney and Mirage owner. He bases his airplane in Virginia.