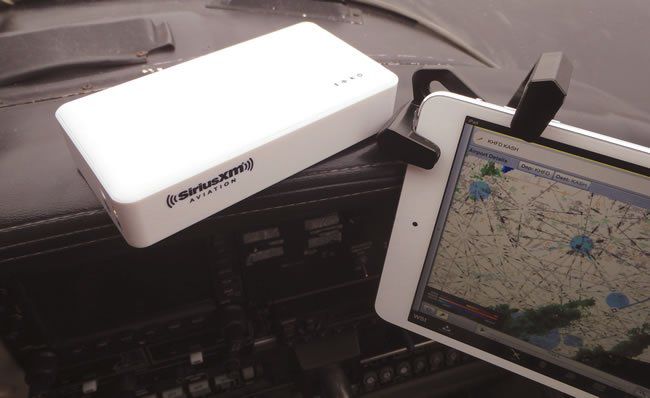 Responding to blistering competition from a handful of free ADS-B weather apps and receivers, SiriusXM is out with the new $699 SXAR-1 portable Broadcast weather and entertainment receiver. The receiver wirelessly streams WSI weather data directly to the iPad, eliminating the need for a panel display or portable GPS.

While Garmin released the next-generation GXM42 receiver early last year (we covered it in the March 2014 issue of Aviation Consumer), we think the interface started out stale because the wired receiver isnt directly compatible with tablets.

The other half of the interface is the Pilotbrief Optima iPad app from WSI-a program that supports the companys own weather data thats delivered by SiriusXM. While were impressed with the weather graphics, performance, reliability and feature set, a third-party app interface and more navigation features could add more utility and lower-end market appeal-a shrinking market, we believe.

Hardware, Software
Roughly the size of a fat smartphone, the $699 SXAR-1 satellite receiver is 5.0 by 2.7 by 1.2 inches, weighs roughly one pound and has a nonskid base. Marketing data says it has easy portability and placement on dash, but we wouldnt want to be within its trajectory during a crash.

Controls are limited to a power button and power cable input on the side of the case, plus four status annunciators on the top of the case. These show the status of power, satellite reception and Bluetooth connectivity.

We found the receiver works fine while resting on a seat and stashed in a flight bag that was in the back seat. Although the device has an integral SiriusXM and GPS WAAS receiver/antenna, it can accommodate external antennas that plug into the case. We didnt need to use them.

The SXAR-1 is compatible with the iPad 2 and newer tablets, including the mini. Off to a frustrating start, we experienced Bluetooth connectivity problems and random app crashes when trying to use the device with iOS 8.0. These issues were solved with iOS 8.1.1, an update recommended by SiriusXMs engineers. The WSI Pilotbrief app is not compatible with Android devices.

The SXAR-1s rechargeable battery has reasonable endurance. We were able to stretch it out for seven hours between charges.

The Pilotbrief Optima app for iPad trickles down from the Pilotbrief desktop program. Youve likely used the WSI application in an FBO flight planning room and many of its features carry into the iPad app, including radar and satellite weather charts and summaries.

WSIs Eric Jean rattled off no fewer than four major airlines that use the WSI weather service, while making it clear that the Pilotbrief app has roots in the corporate and commercial market. Thats one reason why the app doesnt come out of the gate with expected features like along-the-route fuel pricing-a feature that general aviation users have grown to expect from other apps. Still, WSI isnt new to the lower-end market.

Remember that it developed the Inflight satellite weather system and the AV-series receiver. It interfaced with the Apollo MX20 MFD, and unofficially with early Garmin GNS430 navigators through an RS232 connection.

We found the Pilotbriefs menu structure easy to get along with in short order. The menu bar at the bottom of the app has a download manager tab for downloading aeronautical charts, airport and navigational data. This includes low and high IFR charts, plus VFR sectional maps for the continental United States. While you can view these charts when connected with the SXAR-1 receiver, they must first be downloaded over an Internet connection.

The app has three connectivity modes-Internet (or 3G/4G data), the SXAR-1 receiver and ADS-B, through the Dual Electronics XGPS170 portable ADS-B receiver.

Any of the approach and departure procedures/plates that you download online will also be available in the apps inflight mode. While ownship data and a courseline between waypoints in the flightplan appears on sectional and IFR charts, the approach charts are not georeferenced, and nav features are limited.

The Map tab brings up the mobile interactive map and it enables overlay of various weather products-called layers-on top of a base map or aeronautical chart. If location services are turned on in the device, the map is automatically centered over the current position, based on the WAAS GPS inside the SXAR-1 receiver. The map has panning and familiar pinch-and-zoom touch functionality, and we were impressed at how efficiently and quickly the app ran on a new iPad mini 3.

A long tap of the map executes a geo-search for airports, waypoints and navaids within 50 miles of your position, and there is the option of adding the waypoints to the active route.

The Map tab has an option for calculating and filing flight plans through DUATs. First, you create an aircraft profile for saving in the app for optimized route building. Select the departure, destination and alternate airports, in addition to departure time, and flight plans can be created and filed directly from the app. VFR flight plans require a DUATs credential, but IFR flight plans do not. Once a flight plan has been filed, it can be retrieved from a recently filed slideout panel on the left side of the map page.

Weather Layers
A secondary menu bar has a layers icon for selecting weather graphics for overlaying on the map. The drop-down menu is simple and lists the available products and time stamp of the data. The chart to the right has a complete list of WSI-sourced weather products that are inclusive with a given SiriusXM Aviation subscription plan. The new SXAR-1 receiver wont receive weather sourced from Baron Services WxWorx.

Our evaluation was with the flagship Pilot Pro, which gained access to Base Reflective Radar, Composite Radar, Cloud Top, Echo Tops Raster and Graphical Turbulence products. These are found in the Layers drop-down menu under the Radar and Satellite submenu. Simply tap the product you want to overlay, while the Map Settings tab changes the map layer. A Layers Transparency slide control does just that-it creates transparency so you can see the base map through the weather graphics. This can be a handy feature when viewing a busy radar image.

There is a dedicated menu tab for turning on HD Radar, HD Satellite, Radar Summary, Lightning (from WSIs Global Lightning Network) and WSI SIGMETs. To the left of these tabs are controls for looping the images, including past and future radar and satellite pictures.

Its worth considering resolution and bandwidth signatures of the radar data compared to free FIS-B data. When streaming the data from the internet, WSI says you can expect 1 Km resolution, but data from the SXAR-1 receiver is lower. Exactly how much lower is unknown because SiriusXM said they dont publicly share resolution specs. They did say the resolution is better than FIS-B radar, which is variable due to limited bandwidth and compression issues, but does meet certain specs. This includes a spatial resolution equal to or better than 2.2 km for the Regional Nexrad precipitation reflectivity product, and 10.6 km for the continental U.S. (CONUS) Nexrad. WSI kept the inflight radar coloring as close to the same as it appears online, but with less colors.

One feature that we found intuitive and useful is Graphical Turbulence. When activated, a graphical turbulence slider control appears at the upper left corner of the app. This is for graphically mapping (in purple color-coding) projected turbulence as high as FL390.

Which Market?
As good as we think the portable SXAR-1 receiver performs, were not convinced its a game-changer in a market thats seeing an upswing in major installations, including ADS-B In receivers. The Broadcast advantage, however, is more weather products and functionality on the ground. That cant be said for ADS-B.

Its tough to say which market the new SXAR-1 receiver will appeal to. It could be buyers that want to ditch existing Garmin portables, like older GPSMAP396/496 systems, in favor of using the iPad exclusively. For these users, the future of their existing data plans (and receivers) is unknown. Frankly, we cant see SiriusXM maintaining both data streams, and we suspect many users will be forced to upgrade.

Adding to the competition is Garmins recently introduced Connext wireless cockpit interface and Flight Stream wireless transceivers. For users that want to display XM data from an existing Garmin GDL69 receiver on their iPad or Android devices, the Flight Stream will do it. But that requires an installation. For that reason, we can see the appeal of the SXAR-1s toss-on-the-panel portability. Based on our trials we can call it a solid performer, but think it needs more popular app interfaces to gain sizable market traction. SiriusXM told us other app interfaces will be available in the future, but wouldnt say which ones.

As for the WSI Pilotbrief for iPad app, we think its weather display capabilities are unmatched, but we think users will demand more navigation features. This includes georeferenced charts, frequencies and airspace data, to name a few.

While we like that it can interface with the Dual XGPS170 ADS-B receiver, it wont display ADS-B traffic. Thats a huge limitation, in our view.

You can purchase the SXAR-1 receiver through Sportys, and SiriusXM is offering a $300 rebate when you sign up for a six-month or longer aviation subscription. Basic WSI Pilotbrief subscriptions start at $29.99 for a three-month period.