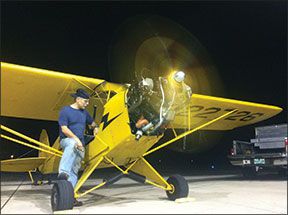 The words “cheap” and “overhaul” aren’t known to appear in the same sentence, but it’s true that smaller, modest engines are cheaper to overhaul than high-horsepower sixes. But what about old and modest, specifically Conti-nental’s numerous A-65 series and its offshoots? Are these the gateway to affordable flying or just doddering antiques getting ever more expensive to maintain?

The question is more than academic as many buyers turn to legacy airplanes that qualify for light sport status. They’re looking both for flight privileges without fear of medical loss and for affordable ownership, which means an engine that won’t decimate the bank account if it crumps a cylinder or eats a valve. The news is mixed. Smaller engines like the A-65, A-75 and A-80 series and the C-series offshoots aren’t exactly cheap to overhaul, but despite their advanced age, they remain eminently supportable. Even the utterly orphaned Franklin engines remain viable.

Legacy LSA
At least seven standard-category or legacy aircraft types qualify for LSA status. With the exception of Piper’s classic J-3, many of these are cheap to buy and maintain, although some parts may not necessarily be off-the-shelf available. These older models sport a range of engines, but if there’s anything like a common powerplant, it’s Continental’s four-cylinder A-65. This engine is found in Cubs, Aeroncas, Luscombes, the Taylorcraft BC series and in the Interstate Cadet. The Ercoupe has the A-75 and some of the popular legacy airplanes have been re-engined with more powerful powerplants from the C-series, the C-85 and C-90. However, if LSA is your wont, know that not all models of the same aircraft qualify for light sport with the larger engines, with Cubs and Luscombes as the standouts.

Steve Krog, who runs the Cub Club support organization for Cubs, says that when the J-3 first entered production in 1937, three engine choices were available: a Continental, a Lycoming or a Franklin. “Whatever engine was sitting there when it came down the line, that’s what it got,” Krog told us. Lycoming stopped supporting the O-145 and the Continental A-65 eventually became the most common engine, although about 100 still fly with the Franklin 4AC. The J-3’s type certificate (or STCs) allows engines from the 40-HP A-40 to the Continental O-200.

Lots of 65s
Even though the A-65 engine dates to 1939 and has been out of production for some 60 years, it’s not exactly a relic. Don Swords, who operates Don’s Dream Machines, which specializes in small-displacement Continental overhauls, estimates the number of A-65s still active to be in the tens of thousands. He doesn’t lack for overhaul demand. One reason for that may be that even though the engine is eminently supportable, not many shops will agree to overhaul it.

“We’ve done a couple, but I actually say we don’t do them because of the lack of ability to get the carburetor overhauled correctly,” says Charlie Mellot of Zephyr Engines in Zephyrhills, Florida. Zephyr’s response to our query was typical of other shops we contacted. They refer the A-65 overhaul business elsewhere.Cub Club’s Krog has a couple of referral recommendations, including Don’s Dream Machines in Griffin, Georgia (www.donsdreammachines.com) and Poplar Grove Airmotive (www.poplargroveairmotive.com) in Poplar Grove, Illinois. For cylinder and A-65-related machine work, Krog recommends Harrison Engine Service in LaPorte, Indiana. (See www.harrisonengine.com.) Given its simplicity, the A-65 and its variants—including the C series—are easily repairable by any competent maintenance shop, but overhauls will likely have to be shipped elsewhere. When our partnership J-3C Cub tanked its A-65 last fall, we trucked it to Don’s Dream Machines for an overhaul. With only 500 hours on the A-65, one cylinder was flat and one connecting rod was loose on its crank journal.

Limited Options
Compared to higher-horsepower engines, there’s not much to an A-65 and thus not many menu options during overhaul. Swords said the basic overhaul price is $9500, which includes no accessories, just the basic engine.

It assumes the crankshaft and cam are within service limits and the cylinders and cam followers are as well. Swords says his overhaul includes overhauled cylinders, but additional charges for a rebuilt carburetor, new or overhauled magnetos and harnesses. When dealing with Don’s or any engine shop, we recommend a written quote. Not all shops include everything in the basic quote.

One option Don’s offers is an extra 10 HP, upgrading the engine to 75 HP. This requires different pistons, rods and pins to support the higher RPM, but the shop doesn’t charge for that. To generate the higher RPM, you’ll need a new prop, which we ordered from Sensenich through Don’s at the shop’s cost of $1975.

Despite its advanced age, parts for the A-65 are widely and readily available. Swords told us the overhaul pool is so healthy that he rarely resorts to using new cylinders. But they are available from Superior Air Parts—or will be later this year. The last price we could obtain was $5230 for the complete set of four, so new jugs will be a significant upcharge.

Overhauled cylinders are sent out for some types of work, but Swords does the basics in house. For an engine that will see service in corrosive environments, he also offers Nu-Chrome as an option.

“The only thing we really have problems with is sometimes the cam just won’t make it, or the crank won’t. But these aren’t typical things,” Swords told us. Cam follower bodies can also be a problem that adds to the bottom line, if the existing parts can’t be reground. There aren’t any new cams in the parts pipeline, but there are plenty of used serviceable cams in the pool. In some cases, worn cams can be plated and reground to new or service limits.

Given the play we discovered in the number 2 connecting rod, we weren’t too surprised to hear that our crankshaft was trashed, resulting in a $1000 upcharge for a replacement core. We also bought two cylinder cores to be overhauled to service limits for the engine. As with cams, no new cranks are available, but Swords said there are plenty of these on the market, too.

As for mags, Don’s overhaul cost does not include new or overhauled mags, as some overhauls do. Don’s will clean and inspect mags and harnesses, but shys away from recommending overhauls. “By the time you pay for an overhaul, the price is pretty close to a new mag,” Swords says, “so we recommend Champion/Slicks as a replacement.” That adds another $3200, so worst case, with new cylinders, a crank upcharge and a set of cam followers, the invoice can total around $18,000 to $20,000. That’s actually more than some shops charge for a Lycoming O-320 overhaul.

If the point of the exercise is an economical overhaul and given the way A-65 engines are likely to be operated, opting for new cylinders doesn’t strike us as a good-value option unless it’s unavoidable. Judging by our discussions with Don’s and other shops, overhauled cylinders will remain an option for the foreseeable future.

Other Choices
For owners looking for more performance and willing to spend the money, some aircraft will support