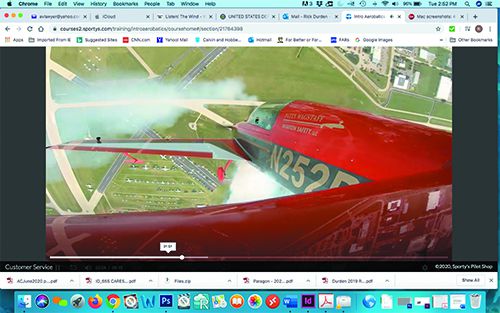 Long-time purveyor of all things aeronautical, Sporty’s Pilot Shop (www.sportys.com) is adding a new dimension to its online training by going outside of its organization to create a line of courses that delve into specialized areas of aviation. The plan is to team with well-known experts in each specialty. It recently released the first one—an intro to aerobatics course taught by one of the most famous pilots to ever do a Lomcevak, three-time National Aerobatic Champion Patty Wagstaff.

Priced at $49.99, the Intro to Aerobatics course can be played on virtually any device you own. The graphics and imagery are what one expects from Sporty’s—absolutely first rate. That’s a screen grab at right from one of the videos in the course showing Wagstaff flying her Extra 300L in an airshow.

The course’s Intro title is accurate. As Sporty’s John Zimmerman told us, “It’s a survey course to get you started into the world of akro.” We agree. It’s Akro 101; a wide-ranging look at aerobatics that covers a great deal about the sport—history, regulations, physiological considerations, safety, types of aerobatic airplanes, finding a flight school and maneuvers—but, in keeping the course to a reasonable length, does not go deeply into any of the many subjects it addresses.

The course is set at Wagstaff’s flight school on the St. Augustine, Florida, airport. It features two of the airplanes her school uses for aerobatic instruction, a Super Decathlon and Extra 300L, as well as her highly experienced aerobatic instructor and airshow pilot colleagues,  Allan Moore and Spencer Suderman.

We liked the breadth of the course—simply because there is a great deal to consider when deciding to learn aerobatics. It covers the FARs that are applicable, notably the minimum altitude, where you can and cannot do aerobatics and parachute use. It also goes into the current world of competition akro and that you can get individual approval to do aerobatics at lower altitudes as you develop and demonstrate your skills. Want to become an airshow pilot? The course explains what’s involved and provides a little taste of what it’s like.

We appreciated the short segment on “stunt” flying and the explanation that it is usually for one-off events for such things as movies or TV commercials and is done after careful planning and mature consideration by highly skilled pilots. Without expressly saying so, it makes it clear that getting maximum performance out of an aircraft is not a matter of “Hold my beer and watch this!” foolishness.

Two sections are devoted to introducing aerobatic maneuvers, splitting them into basic and advanced. Each maneuver is the subject of a short video—only just over a minute. In that time the maneuverer is shown graphically from a position outside the airplane—with the Aresti aerobatic key maneuver depiction (Aresti aerobatic shorthand is explained earlier)—then from a camera mounted on the horizontal stabilizer looking forward, followed by a view looking forward just above the pilot’s head, and concluding with a view from the right wingtip looking toward the fuselage.

Our initial impression was that each maneuver was treated too lightly; however, as we watched each video again, we found that we stopped it repeatedly and were able to get much more of an understanding of the dynamics of each one.

The advanced maneuvers segment included the Lomcevak—which is loosely translated from the Czech as “headache”—and gave us one of the best displays of how the airplane tumbles end-over-end due to gyroscopic precession we’ve yet seen without actually doing one.

The final segment is a series of aerobatic maneuvers seen from inside the airplane with the camera placed just above the empty front seat. The scene can be panned through 360 degrees so we found ourselves stopping the action frequently and moving the camera to look around. We could see the stick deflection at any point of the maneuver and look outside in various directions. In our experience, a major part of the battle in learning aerobatics is figuring out where to look for reference points that let you know how each maneuver is progressing. By being able to stop the video and look in different directions, we felt it was possible for a student to learn where to look—wingtip, straight up, 45 degrees to one side and down, for example—to help make sense of a maneuver while flying it.

The course, not surprisingly, is an advertisement for Wagstaff’s school, but we felt it was much more. We’d have loved to have seen this before we started our aerobatic training because it put a lot of valuable information that we had to look for from numerous sources in one place. We’ve found that we spent some time looking at the individual maneuver videos to pick up subtle points that we’ll use in our own aerobatic flight.

We’re looking forward to the additional videos in the aerobatic series as well as other topics Sporty’s chooses to explore.