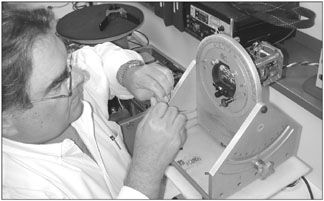 As general aviation marches bravely forward into the dawn of the electronic flight display revolution, youd think the days of the iron gyro would be numbered. Who in their right mind would design and build a new one? Answer: the worlds most well-known pilot boutique, Sportys Pilot Shop, along with an equally well-known instrument maker, Castleberry Instruments of Austin, Texas.

Have these guys come adrift or is there really a market for such a thing?As with all things in aviation, theres a market for everything if the price is right and on this new instrument, the price is definitely right, a bargain-basement $1595 for a fully lighted, well-designed electric attitude gyro suitable for back-up in airplanes with vacuum systems.

We know a thing or two about the economics of instruments and avionics and like a few of our readers, one question occurs to us: At that price, can this product possibly survive and make enough profit to sustain itself? Sportys CEO Hal Shevers, whose determination to offer an affordable back-up gyro is embodied in this product, insists that this new gyro will flourish. (It better; hes pre-paid for 1000 of the gyros, which explains in part why the price is so cheap.)

When the gyro was announced a few months ago, our e-mail inbox lit up with requests to obtain one for testing. Accordingly, Sportys sent us one last August and we promptly marched off to our favorite instrument shop to crack it open and wring it out on the gyro table. The executive summary is thus: Despite its low price, this isnt a cheap gyro and if you want a back-up electric AI, grab one of these before the bean counters at Sportys snap back to their senses and add about a grand to the price.

Long Battle
Weve stood on the sidelines for the past 15 years watching Hal Shevers wage what might best be called the War of the Gyros. Beginning about 1991, Shevers petitioned the FAA to amend the language in FAR 91.205 to allow a second attitude gyro to be installed in place of the required gyroscopic rate-of-turn indicator, either a turn-and-bank or a turn coordinator.

Ever true to its culture, the FAA dragged its feet, dodged and demurred on changing the regulation but it finally caved in to Shevers simple request-after a fashion-by issuing Advisory Circular AC-91-75 in 2003. The AC says that in airplanes under 12,500 pounds, an electrically powered (or vacuum powered) AI can replace a turn indicator. In the case of the vacuum-powered replacement, however, a second independent vacuum system must be installed, an eventuality so unlikely that an electric replacement remains the only practical option, at least in this context.

Having cracked the lid on a Pandoras box of sorts, Shevers realized the market didnt have an economical iron gyro suitable for replacing a turn instrument. Lately, Mid-Continent Instrument has introduced the 4300 series electric AI which we find to be a superb instrument. Its also $3000 in its cheapest iteration. The L-3 AIM electric gyro is higher on the food chain, at $4999 and up. Kelly Manufacturing is still selling the bottom-end RC Allen R26A for about $2800, but weve been reluctant to recommend it because of complaints about poor durability.

Shevers idea was to find an instrument house willing to build-in volume-a competent gyro for about $1000 and he approached several manufacturers with just that proposal. They laughed at me, Shevers told us, they said it just couldnt be done.

Then, during a chance encounter with executives from the newly reconstituted Castleberry Instruments and Avionics, Shevers told us he made the pitch one last time. Castleberry said it couldnt meet the $1000 price point, but how about $1400? Shevers agreed and added $200 on top for the final price. The only catch: Shevers would have to order 1000 instruments up front in order for Castleberry to realize the economy of scale necessary to beat the price back. Instrument manufacturers are accustomed to Ferrari-like production volumes; a dozen gyros is a huge order. Overnight, Castleberry morphed into the Ford Motor Company of electric gyros, hence the bargain price.

The AIM Gyro
Long-time owners and pilots recall what used to be known as the AIM gyro, or technically the AIM 300-14, originally designed by a company called Aviation Instrument Manufacturing. The 300-14 has been through various iterations and companies and has been available in both vacuum and electric versions. The AIM 1100 electric gyro still built by L-3 is a relative of the original AIM, L-3 having bought the line from Goodrich. The new Sportys gyro-officially the 300-14E(L)-is also related to the original product but to avoid infringement, Castleberrys Ron Gibson told us the design was carefully reviewed by L-3, who was reportedly satisfied that its a different enough instrument to have raise no infringement beefs.

Our independent evaluation of the gyro by Dave Vorsas at Triumph Instruments and Avionics in Fort Lauderdale, Florida (formerly JDC, see Aviation Consumer, January 2005) confirms that the Sportys gyro is not just different than what most of us know as the old AIM, but also improved. More on that later.

Gibson told us Castleberry has ruggedized the gyros mechanical and electronic guts and added a controller that minimizes power consumption.Theoretically, this makes the gyro run cooler and should improve service life. The instrument also has an improved gyro motor, although the basic configuration of the instrument is similar to vacuum-powered AIs. Its available in 14- or 28-volt models and both are shipped with internal lighting as standard equipment. The lighting requires a separate lead and can be dimmed through the panel circuit. The gyro has a two-year, 100 percent warranty through Castleberry.

Wringing It Out
Triumphs Vorsas had one immediate complaint when we showed up with the gyro.The shipping box, he said, was too small. Most companies ship gyros in double boxes, both foam lined, to prevent shipping damage, which is a common warranty complaint. In fact, Vorsas wouldnt let us leave with the original box but insisted on repacking it in a double box. Shevers told us about 77 gyros have been shipped in the small boxes with no damage. But were skeptical. For an extra few bucks-let the customer pay for it-we think the instruments should be double boxed, just as Castleberry ships them.

After an inspection for balance, bearing tightness and general construction-all of which Vorsas said were exceptional-the gyro was mounted on a test table and spun up. One nice touch was immediately obvious: The flag doesnt pull until the gyro is up to speed so its circuitry is equipped with a speed sensor. Very nice. It took about 30 seconds to spin up. Vorsas found the rotor balanced, with no hint of vibration.

Some fine points he noted: The pendulous vanes, which control air jets used for self-erection, pivot on bearings, not pins through holes, as gyros made to a lower standard tend to have. The vane stops have ceramic sleeves rather than shrink tubing and this minimizes sticking, another nice touch.Vorsas noted that the rotor bearing pre-load can be adjusted while in an older RC Allen gyro he showed us, the bearings were epoxied in place, something that makes them all but unrepairable.

After running the gyro up to speed, Vorsas had the table simulate a series of rolling dives and climbs to test the gyros tendency to precess. None was noted. When precession was forced by disturbing the gyro by hand, it recovered at about 2.5 degrees per second, also a good performance point.When powered down, the gyro tumbled as it spun down, indicating a slight misbalance in the rotor mechanism, something Vorsas told us wasnt much of a shortcoming. Repair shops generally try to balance gyros so the rotor wont tumble on spin-down. Some do, some dont.

Vorsas pointed to limited clearance between the bottom of the circuit board and the manual caging ring as potential long-term failure point if the board should warp or sag. But Castleberrys Gibson told us that temperature testing of the gyro revealed no interference between the board and ring. Only long-term service will reveal if this is a weak spot. We dont think its a deal breaker by any means. Vorsas overall view of the gyro is that its a lot of instrument for the money. We know the guys who built this and theyre good. This is not a gyro made with cost cutting as a goal, he said.

Conclusion
This doesnt happen often but this product is more than $1000 cheaper than its closest competition-the RC Allen R26A-and, in our view, its a better gyro. That begs the question, it is too cheap? Weve seen more than one aviation product dry up and blow away because the maker simply didnt build in enough profit for long-term service and warranty work. Suppose, for example, 500 of these have to be recalled for some unknown flaw.

Will a $200 margin per unit support that? Shevers insists Sportys and Castleberry will stand behind the gyro and if the factory cant handle the service volume, it will release the documentation necessary for shops like Triumph to fix it. (Currently, that documentation has not been circulated, so factory service and repair is the only option.)

Were reticent to slather too moistly over new products until theyve proven themselves through long-term service. Recall the dual-chamber vacuum pump fiasco of a year ago, in which the company simply folded up in the face of premature failures, leaving buyers holding the bag. Although the 300-14E(L) is a new product, the design is based on a proven gyro built by a company with a track record. (Besides, we know where Mr. Shevers lives.)

We cant think of any reason not to recommend this gyro for owners who need affordable back-up for vacuum instruments. Our review of it suggests its exactly what Hal Shevers says it is: A high-quality gyro selling for the lowest possible cost. We would happily pay another $30 for a bigger box with more foam padding, just as additional protection against shipping damage to the instruments delicate bearings.

Also With This Article
“Inside Sportys Gyro”
“Checklist”
“Why Not the Electronic Solution?”