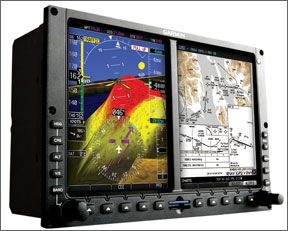 Datalink weather for the cheap seats-cheap being single-engine aircraft flying with sophisticated portable GPS-is arguably one of the top safety enhancements of the past five years. Running a close second (or even first for some buyers) are terrain warning features that despite their low cost, are capable of keeping you out of the weeds and towers. Theyll even yell at you, if you want.

But compared to fanciful weather depiction, yellow and red terrain warnings with red Xs for towers are, frankly, boring. The evolving world of synthetic vision

addresses that and now Garmin is making it available in all of its electronic flight display products, right down to the entry level G500, recently introduced at Oshkosh as an option for aircraft under 6000 pounds. Is it worth the add-on cost to a lower end system? We think that depends on your budget, but theres no question SVT improves situational awareness and clarifies what can be an ambiguous two-dimensional display of the TAWS-type presentation.

SVT is now available on all of Garmins EFIS products as standard equipment on the G600 and G1000 and as a $4995 optional add- on for the G500, a downmarket EFIS Garmin announced in July 2009. The implementation between these systems is essentially similar, but there are some subtle differences related to display detail. In all of the systems, SVT appears only on the primary flight display side, behind the attitude indicator/HSI depiction as a graphic rendering of terrain contour and obstacles. It works in concert with the terrain warning or TAWs thumbnail that can be displayed on the multi-function display side.

As with all synthetic vision of this type, the Garmin system is entirely data driven, using a detailed terrain and obstacle database to paint a virtual picture of the world in front of the airplane based on the airplanes known GPS position.

To sharpen up the terrain picture, Garmin uses a higher resolution terrain database for the SVT than for the terrain awareness features it has been providing in the GNS series of navigators. Previous data has been limited to 30 arcsecond cells, but for SVT, the cells are reduced to 9 arcseconds and Garmin is actually considering 6 arcsecond data. For latitude parallels, arcseconds are nearly constant in geographic dimension, but for longitude, arcsecond area decreases toward the poles. At the equator, a 9 arc-second cell is about 900 feet square. At mid-latitudes, its rectangular and about half as wide. Nine arcsecond data implies that theres a single datapoint in that cell signifying the highest terrain or obstacle. Thats what the software uses to sketch the virtual terrain.

What this means is that depicted terrain conforms closely to what you see out the window, but sharp-edged ridges and gullies will have softer edges and things like giant boulders are cliffs wont necessarily appear in true detail. To add snap to the presentation, Garmin shades the terrain with color gradients to simulate shadowing. (Think of the wholly misnamed Bliss desktop display for Windows and youve got a pretty good idea of its appearance.) Theres also a circular green vector path indicator that shows aircraft path (and impact point) independent of nose position. It automatically compensates for wind effects.

The display is constructed by reference to two databases, one for basic terrain and a second for the more dynamic obstacle environment. The terrain map-worldwide coverage-was developed from NASA radar mapping data reduced to geographic tiles, while the obstacle data is supplemented by additional sources, but is also worldwide. Only obstacles over 200 feet are depicted-scud runners be aware.

Garmin has achieved impressive performance with terrain warning right down to its inexpensive portables and this capability is built into the G500/G600 SVT products. Before the advent of SVT, electronic terrain depiction has traditionally been a three-color code affair. Black on the terrain map represents no threat, yellow represents a terrain threat within 1000 feet and red represents 100 feet or below. These values are based on the aircrafts GPS altitude relative to the terrain elevation.

SVT enhances this with both a graphic display and predictive capability that colorizes the SVT terrain according to calculated threat based on the airplanes path trend. On the MFD terrain side, for instance, if youre 1000 feet above any terrain, the display will appear black. (Relevant towers and obstacles are marked by red Xs.) Below that value, the display turns yellow or red.

On the SVT side, similar warning data begins to appear at about 7 miles from the terrain or obstacle, coloring the tops of the terrain yellow first, then red, according to threat level. Because the hardwares graphic processor is capable of showing gradients, the red, yellows and greens blend into each other, rather than having the hard-edged radar-like look of the TAWS presentation.

If the system calculates your current trend path will clear the terrain by at least 1000 feet, it wont colorize distant terrain, even though youre below its known elevation at the moment the calculation is made.

The SVT includes most but not all of the typical terrain warning and alerting youd expect from a TAWS system. These include terrain system failure, yellow and red warning flags, obstacle flags, along with aural warnings. Sink-rate warnings arent included.

Since day one, G600s have been shipped with the graphic processor necessary to run SVT. For owners of this hardware, Garmin is offering it as a free upgrade until the end of the year, although buyers will have to pay minor installation and shop charges. The upgrade requires an SD card and software update.

Buyers of new G500 EFIS can have SVT as a $4995 add-on option, along with other choices such as datalink weather and traffic. Were not sure how buyers will prioritize those choices, but we would go with weather, traffic and SVT, in that order, if budget is a consideration. All of the WAAS-capable GNS series navigators required to run the G500/G600 are now terrain database capable, so theyre ready to play with the G500/G600.

Speaking of which, database costs to keep SVT current run like this: The background terrain data costs $150 per update and shouldnt need regular revisions since terrain doesnt change much. The obstacle database revisions-which will need updating-sell for $50 each or $199 per year. Nav data for the G500/600-this is independent of the GNS data, by the way-sells for $49.95 each and $295 annually. This data supplements the G500/G600 display information that isnt sent over by the navigators.

If youre running all of this with a pair of GNS 430s or a 530/430 combination, add another $550 for 28-day navigation revisions. Bottom line? About a grand a year for basic data, plus $600 to add Garmins FlightCharts and options. Garmin tells us its working on more favorable data packages that are aircraft rather than product based. The suggested retail price of the G500 is $15,995, excluding SVT and the GAD 43 autopilot interface.