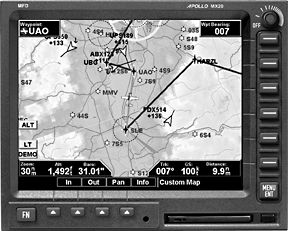 As we sailed down final at an uncontrolled airport near Louisville, Kentucky recently, it was clear that company was coming. Another light aircraft was approaching at traffic pattern altitude.

Back in the air for another touch and go, we turned downwind as the other airplane tucked in behind us, out of sight in the downwind. But we never lost track of the Cessna 210. Its altitude, speed and direction were neatly displayed in the cockpit of our Bonanza.

Better yet, a delta-shaped symbol showed the position of the Cessna and an extended vector line showed where the airplane would be a minute later. No guesswork required.

Welcome to the revolutionary world of ADS-B, or Automatic Dependent Surveillance-Broadcast, a technology that may be the Great White Hope if youre steamed about having to spend $30,000 for collision avoidance equipment and half again as much for weather datalink. To oversimplify it, ADS-B and related technologies represent a general-aviation version of drive-time radio-live traffic and weather. And maybe a lot more, if it comes to pass. But thats a big if. Thus far, the system looks promising, if a demonstration we saw recently pans out in the real world.

What It Is
Lets start out with just what ADS-B is. ADS-Bs merits rest on the stellar accuracy of GPS. Coupled with altitude encoding, a GPS-equipped airplane always knows its altitude, latitude, longitude, speed and heading.ADS-B simply broadcasts that information directly to other aircraft within range and to controllers on the ground. Your position- along with whether youre climbing, descending or turning-is displayed on computer-like screens both on the ground and in the receiving aircraft. (In the final iteration, this makes radarless air traffic control a possibility.)

At the same time, those aircraft are broadcasting their positions and you see them in relationship to your own position on a cockpit display. The range is about 150 miles.

The workings of the ADS-B system are automatic but the information it uses is dependent on other sources, such as GPS and altitude encoder. Its a surveillance system for tracking aircraft and works through broadcast, thus ADS-B.

Nice in theory and in demonstration mode, but beyond that, things get complicated. On the ground, there has to be a reliable fusion of information from traditional radar and ADS-B-including the electronic elimination of duplicate targets on the same aircraft.

In the air, because not all aircraft will have ADS-B equipment at first, air crews would see only other ADS-B-equipped aircraft, an obvious shortcoming. So for pilots to have the same traffic picture seen by the controller, the targets depicted on radar must be uplinked to airplanes. A system called Traffic Information Service-Broadcast (TIS-B) would handle that chore. Again, sophisticated software and computing power would fuse the ADS-B data coming directly from other aircraft with the uplinked data.

One advantage of such an uplink is that other information can be sent along to pilots at the same time, such as NEXRAD storm data, METARS and other textual data and even ground-based lightning plots. A system called Flight Information Service-Broadcast (FIS-B) has been developed to do that and its on the air and operational, being delivered by vendors under government contract.

This data, by the way, can be nicely integrated into the current generation of multi-function displays, right down to the smaller units, such as the Garmin 430. Exactly how it will look is not resolved, but it can be done.

Free Flight
Beyond these obvious improvements, the supporters of ADS-B see a bigger picture that encompasses the FAAs controversial free flight concept. In general terms, free flight would decentralize some of the command and control in todays air traffic system. To the extent possible, aircraft would fly direct routes with separation duties shared between ATC and crews.

Pilots, relying on an electronic overview of the traffic around them could maneuver freely while maintaining a protective bubble of airspace around their aircraft. This could even yield a new category of flight rules: EFR for electronic flight rules.

Enhanced see and avoid: With traffic electronically displayed in the cockpit, it would be easier to locate and avoid other aircraft, especially in marginal VFR.

Advanced approach and departure spacing: To increase airport capacity by reducing separation distances between aircraft that, in the real world, often exceed whats required. In theory, ADS-B could increase a runways hourly approach capacity in IMC by about 20 percent, a significant improvement.

Improved airport-surface safety: A cockpit display can show precisely where an aircraft is on the airport, reducing the incursion threat. One enhancement is called runway occupancy awareness.

Lets say youre cleared for takeoff while another airplane is taxiing across the runway. The ADS-B display of your runway would turn red to warn you that the concrete is already occupied.

Surveillance of flights out of radar range: Controllers, with help from the pilots, could more positively track and separate airplanes on oceanic flights or in mountainous areas which lack radar coverage.

Cheaper GPWS: Controlled flight into terrain (CFIT) is a major accident cause in GA and the airlines. A GPS with a terrain and obstruction database can give pilots cheap onboard ground prox warning.

On our demonstration flight, we could clearly see other ADS-B-equipped traffic on our moving map, using an UPSAT/Apollo MX-20 multifunction display.

Targets were tagged with altitude, ground speed, tailnumber and type-large aircraft or small. (GA pilots have the choice of displaying VFR rather than their tail number.)

A vector line extended from each target showed where the airplane would be in one minute. Altitudes of the targets could be shown as MSL or relative to our own altitude, such as +300 for 300 feet above and so forth. The range of the display could be adjusted to get a detailed view of nearby targets or to get a regional picture of air traffic.

On the return to Louisville International Airport, we watched on our display as three aircraft lined up for approach in front of us. It was clear that one airplane was getting too close to the aircraft ahead, and we watched as it broke off and circled around behind us.

On landing, the display transitioned smoothly to an airport surface map. With our movement on the airport clearly shown, the taxi clearance to take Bravo to Golf and proceed on Golf to hold short of Runway 17L was easy to follow. And it was easy to see four other ADS-B-equipped aircraft also taxiing, even though three of them were behind us.

Capstone Tests
That the FAA is behind ADS-B is evident from its funding of Capstone, a project in which it has equipped 150 aircraft around Bethel, Alaska with GPS and ADS-B avionics. Cost per airplane: About $15,000, free for the owners taking part in the trials.

The airplanes have an IFR-certified GPS receiver, altitude encoder and a UAT (universal access transceiver) for the data link between airplane and ground. This technology may be especially appropriate for Alaska.

Radar coverage in most of Alaska is poor, and bush flying prevails. Alaska Airlines flights into Bethel are sometimes cleared for approach 200 miles out, tying up huge volumes of airspace.

But ADS-B equipped airplanes in the Capstone program see each other. Pilots have GPS approaches not available before and terrain information is displayed in the cockpit. NEXRAD data and METARS are being uplinked. (It takes about two minutes to receive a NEXRAD image.)

Data sent to Anchorage Center is providing radar-like information about traffic in the Bethel area and, beginning January 1, 2001, IFR control services will be available using ADS-B traffic information. Some of the Capstone participants were at the Louisville trials and are enthusiastic about the Alaska test results.

What It All Means
So much for the test system, which obviously works and has intriguing potential. But if its to succeed, ADS-B will have to muscle its way into a complex and confused technological environment, not to mention overcome the entrenched forces of the current airline collision-avoidance system, the transponder-based TCAS.

The Cargo Airline Association got interested in ADS-B in 1996 as a way to meet a 2002 deadline for installing collision-avoidance systems on its aircraft. Passenger airlines already have TCAS and may be disinclined to invest in another system, despite its additional benefits. (Since UPS is the Alpha Dog of the cargo guys and happens to own its own avionics company, it has a considerable vested interest in ADS-B.)

But expect some political infighting. Larry Nivert, the FAA program manager for TCAS, has his doubts ADS-B will be certified. At a forum at OpEval 2 in Louisville, he said ADB-S is not a collision-avoidance system and wont be operational for five to 10 years.

The ADS-B crowd might argue the point. On the GA side, the deal breaker may be equipage. Youll need the receiver and displays to use ADS-B and to get the most out of it, everyone else will need the same.

Short term, we dont see the need to consider ADS-B in equipment buying decisions. It doesnt make sense to hold off on buying some kind of datalink system because ADS-B is just around the corner. It isnt.

But given the uncertainty in datalink in general with regard to prices and equipment, ADS-B may be a real comer two to three years from now, especially if the cargo airlines persuade the FAA to throw more money at the program.

Marc Norton is a pilot and newspaper editor. He lives in Louisville, Kentucky.