When uAvionix introduced the AV-20 and AV-30 round-format electronic flight instruments, the company made it clear that more capabilities would be added later through both software updates and hardware additions. The company has been doing just that, incrementally. Here’s an update.

For the large AV-30, which fits into a 3 1/8-inch instrument hole, the upgrades have come in the form of a $299 “dongle” by the name of AV-Link that adds traffic and Wi-Fi capability.

The reason for an outboard module is simple: The AV-30 has a 15-pin D-sub connector on the back, for power, ground, a connection to an OAT probe, audio output and two bidirectional serial ports. That configuration naturally limits physical connectivity.

The AV-30 also does not have networking capability like the Garmin G5 has; one of those RS-232 port sets is meant to connect to an external GPS and the other to service the tailBeaconX Mode-S ADS-B Out transponder. 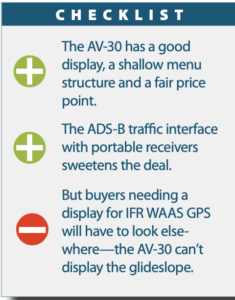 What uAvionix did to expand the AV-30 is build a Wi-Fi module into the AV-Link, which piggybacks between your wiring harness and the AV-30 itself. In this way, adding more capability does not mean adding more wires. What’s more, the AV-Link also provides “over the air” firmware updates to the AV-30 itself; originally, you had to use one of the RS-232 connections and update directly from a PC. Now, updates can be uploaded from any computer’s web browser through Wi-Fi.

Wireless allows for the AV-30’s newest feature: traffic. Using a portable ADS-B In system, the AV-30 can display ADS-B traffic on a new, dedicated traffic screen. The AV-Link is said to be compatible with a range of portable ADS-B units using Wi-Fi, but we tested it with a ForeFlight Sentry.

The AV-30 can accept GPS input from the Sentry, from a connected tailBeaconX or from a panel-mount unit, with which it’ll show nav data, course lines and other features, including GPS groundspeed.

For aircraft where panel space is limited, the AV-30 packs a reasonably solid punch that’s now made better with the AV-Link. Think of the device as an inline Wi-Fi bridge for the display that we suspect will be used for future functionality, but for now it’s a way to stream ADS-B traffic data to the AV-30 for displaying standard ADS-B traffic symbology. Any portable ADS-B In receiver that works via the industry standard GDL90 Wi-Fi protocol can interface with the display just as it’s done with an iPad. That’s the AV-Link—a 15-pin DB device that’s wired into the overall AV-30 interface—pictured to the left. 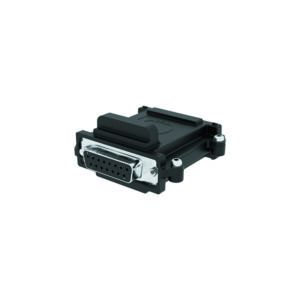 Buyers will likely compare the AV-30 to Garmin’s G5 DG and primary flight instruments (you need two G5s if you want both attitude/flight instruments and electronic HSI), but a G5 won’t display traffic symbology at all. uAvionics says it’s working with third-party companies to achieve an ultimate wireless cockpit interface, and at press time the AV-Link is for experimentals only as uAvionix works on a certified version expected later this year.  —Larry Anglisano

The unit’s feature set is mostly unchanged, and the instrument has minimal bezel controls. Pressing and holding the main rotary knob will cycle among the displays: attitude/EFIS, DG/HSI and now traffic, dubbed the MFD page by uAvionix. Also carried over is the reversionary AI page at the bottom of each page stack regardless of the other mode. If you’re on the DG/HSI page, for example, pressing the Page softkey will eventually land you on a stripped-down attitude indicator, ideal for reference as an emergency backup.

The AI and DG/HSI pages are largely unchanged with the newest software, and retain their customizable data fields. The new MFD page, where traffic lives, is simpler, with one display orientation, a forward-facing arc with GPS track at the top. Traffic is displayed in cyan elongated triangles in conventional ways. The nose of the triangle is the traffic’s direction, a number indicates relative altitude (+50 is 5000 feet above), an up or down arrow indicates if the target is climbing or descending and a thin vector line tells you the relative speed of the target; the longer the line, the faster it’s moving. Pretty much standard traffic depiction.

Rotating the knob changes screen range, in eight steps from 1 NM to 40 NM. Pushing the knob activates the select function, which can be used to get details from traffic depicted on the screen. Turn the knob to move among the visible targets, and the details will be shown along the top of the display.

Under the Menu button is a filtering scheme, where you can choose to limit the traffic shown on the screen. Five choices include Normal (traffic above and below no more than 2700 feet), Above, Below, Only Own (filters only your ownship marker as traffic) and None, which shows all traffic.

In actual use, the AV-30 traffic option works well. It does become solely a traffic display, with no other attitude or navigation information presented, but that’s the right approach to keep screen clutter to a minimum. Since the AV-30 and AV-Link combo is taking traffic data from a Sentry module, what you see there and on your tablet running ForeFlight agree. And while the AV-30’s screen is bright, the resolution isn’t anywhere close to a modern tablet, but the presentation succeeds in giving you the big picture. One feature currently missing from the AV-30’s traffic scheme is an alert function.

We’ve become accustomed to our onboard boxes or our tablet apps to send up a warning when traffic gets close; the AV-30 does not yet do that, though it’s not hard to imagine this feature will come eventually.

uAvionix broadly hints that more features will follow Wi-Fi implementation on the AV-30, and assuming similar source material it’s possible weather could arrive, maybe nav data from an external app. In terms of nav, the HSI mode of the AV-30 only displays lateral guidance because the inputs are limited to RS-232 data streams. (Even if you hook up a navcomm with nav output on the RS-232, say from a GNS 255 or SL 30, you’ll only see lateral on the AV-30.)

To advance the AV-30 into Garmin G5 feature sets would call for an ARINC 429 adapter plus some other networking protocol to drive, say, autopilot servos. For now, though, adding traffic onto the $1995 AV-30 with a sub-$300 dongle (plus a Sentry or similar Wi-Fi-enabled ADS-B data source) is a pretty fair value.