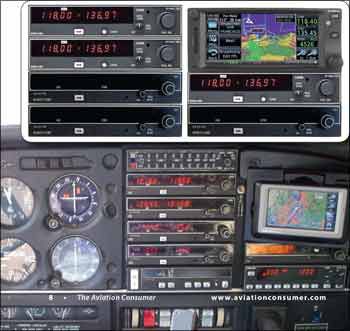 As the fanfare fades, we still think Garmin hit a homerun with the GTN 750 and 650 navigators. As we reported in the March issue of Aviation Consumer, these state-of-the-art navigators offer huge amounts of capability, if at a higher cost than their GNS-series predecessors.

But as far as we can determine, these units arent exactly flying off the shelves. A

thriving economy or a factory trade-up program would probably change that picture, but neither is true today.

Heres a look at some hurdles and tough economics that tag along with Garmins new star of the avionics world and how you might justify buying in … or not.

The list pricing for the flagship GTN 750 and smaller 650 appear nearly unchanged from that of their GNS 430 and 530 predecessors (which are still offered, for now). Dont be fooled. Its the installed pricing that really matters, and these new units will cost more to install than the older units because of a changed dealer pricing structure.

How much higher? Well respect dealer-privileged cost confidentiality, but the net difference between a GNS 430W and a new GTN 650 is nearly two grand (higher yet for the GTN 750). When we queried Garmin on this pricing structure early on, they admitted that shops will need to adjust their price quote structure, and they were right. Trade value of removed 430s and 530s complicates the economics even more.

Weve spotted several shops advertise flat-rate, entry-level pricing. How about a flagship GTN 750 installation starting at $17,395? Seldom will the installation send you flying away paying the “starting at” price. Maybe its a $600 cooling fan installation or $2000 extra in labor to make the equipment fit in the stack. There are just too many variables that come into play once the aircraft is opened up for the installation. Beware of low-balled install quotes on these, or any, avionics retrofits.

We can see how pilots would want these units after a short demo. The flagship GTN 750 is years ahead of the GNS 530 in flight planning, screen quality and feature set. While GTN 650 is scaled down, theres still little comparison to the old GNS boxes.

For lower-end aircraft that dont have a capable GPS navigator-and there are still quite a few of these-the GTN 650 is reasonable choice. With Garmins GI106A nav indicator, a basic installation might start at around $13,000. The bigger screen GTN 750 would push $18,000, and introduce space problems that might only be fixed with a bigger check. For lesser aircraft, thats a questionable number for a single box.

We know of many capable aircraft with equipment dropping off the support curve. The Garmin/Apollo MX20 MFD was a great box, playing charts, radar, weather and terrain. Its the focal point in many panels, but its essentially unrepairable after a display or power supply failure. The same holds true for Apollo GX-series navigators. Theyre boat anchors once they fail. A big-screen GTN 750 offers comm, WAAS GPS and MFD (except for displaying ship radar) as an all-in-one

replacement for such a stack. Call the GTN 750 an MFD-killer and we wont argue with you. This somewhat justifies its price.

For aircraft already decked out with one or more of the old GNS navigators (as long as theyre WAAS units), its tough to justify the expense of a new teardown installation. Were finding that unless the shop offers a trade-in deal on the existing gear, many owners are walking out the door lusting for a GTN, but sticking with what theyve got.

There are exceptions. The savvy owner of an already well-equipped Centurion admits that his current GNS 530W does nearly everything he needs for his wide mission profile. He also has an Avidyne EX500 MFD piped with XM, charts and radar. The way he sees it, the GTN 750 is the logical step-up for his panel and should remain fresh for at least as long as the GNS 530 has for this airplane-10-plus years.

The new and old boxes wont talk to each other the way two GNS navigators can. Also, GTN systems wont play the backdoor-engineered WSI AV200-series weather that works on GNS systems. Youll need a $6000 GDL69.

Based on our surveys, the floodgates for used GNS boxes are half open, and demand remains high. These units are still offered from Garmin, and its a mistake to call them obsolete. Long-term support even after theyre discontinued is a sure thing.

We suspect as time goes on and more GTN units are installed, the value on used GNS units will eventually drop. For now, however, youll still pay top dollar. Just remember that not all units are created equally.

A unit back from the Garmin factory after a $1000 flat-rate service event is as good as overhauled and offers an advantage to the buyer and seller. It also had a warranty. If you score a used unit on eBay or Controller and carry it to your shop to have installed, theres a good chance theyll require it goes back to the factory for that $1000 blessing before they install it.

We think unloading a non-WAAS GNS unit on the used market and investing in the GTN 650 makes better sense than the $3000-plus investment in upgrading the old box. Expect about $2000 for a non-WAAS GNS 430. At that price, if WAAS isnt important to you, the same unit could be an excellent entry-level buy as long as its had factory service fairly recently.

Units that are still under warranty and have relatively fresh factory tags will bring top dollar. One shop quoted us nearly $7000 for a used GNS 430W and $8000 for a 530W with factory overhauls. Dont expect that much for your units, but it probably pays to shop them around.

Fears of $7 avgas, a gouging increase in service and maintenance costs, and a seemingly daily decrease in aircraft values temper the enthusiasm for an expensive avionics upgrade. This is hurting GTN sales, in our view, but its also making the install environment more competitive, if not cut-throat.

If you have a basic aircraft thats been waiting for the big avionics upgrade, we think the GTN 650 is a smart move that will have lasting value. Its already become the new standard. Buying a new GNS 430W would be a step backwards and only save you about $2000. How about dual GTN 650s? We think a single GTN 750 instead offers more capability, including charts, remote audio control and a more powerful user interface. Plan on an installed price closing in on $20,000. And thats not including the remote audio or transponder, which you may need to make it all fit. Thats a huge number for a single box, but remember its really two boxes in one: full-up GPS/VHF nav/com and an MFD.

For others whove recently taken it on the chin with a $15,000 avionics upgrade of the older boxes, its exhausting just thinking about doing it again. One owner commented: “The headaches associated with my project just two years ago has me reluctant to rip it all apart again just to get touchscreen and advanced flight planning features. Plus, my GNS 530W and GMX 200 do what I need it to do for my mission.”

If youre happy with your existing GNS-series suite, we say leave it alone unless your shop makes you a sweet deal on the used gear that would be coming out. But stay away from GTN 750 demos if you do. That same owner who vowed to keep his stack got his paws on a GTN 750 up at a dealer. His equipment is now on eBay, and he sheepishly says hell deal with the install hassle when the day comes.