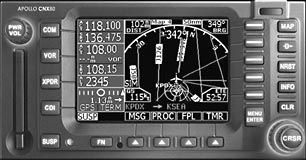 The panel-mount GPS market has been relatively stagnant for nearly three years, giving rise to rumors that something must be afoot. Something is.

In late March, UPSAT gave avionics dealers a sneak peek at its latest product, a color mapcomm looking for all the world like a cross between Garmins 430 and 530, at least in overall size. But the new CNX80 is called an integrated avionics system and true to that claim, it appears to be highly interoperable with UPSATs other well-regarded products, especially the MX-20 multi-function display.

Mid-Price
In some avionics circles, the CNX80 is seen as a Garmin killer which may or may not be true. At this juncture, it certainly does expand UPSATs product line and will likely give a sales boost to related products, such as the SL40/30 navcomms.

UPSAT says the new box will have a built-in 760-channel comm, with 8.33 Mhz channeling as a future option. It will also have an onboard VOR/LOC with glideslope, thus its good for primary or sole means navigation right out of the box. This is the first GPS to be approved under TSO C146a, the WAAS certification. Theoretically, that means it might eventually be approved for primary navigation with just GPS, if the FAA (a) gets WAAS running and (b) it meets the necessary accuracy and reliability to satisfy primary nav requirements.

Its probably a moot point, however, since the CNX80 has VOR to meet the primary nav requirement. UPSATs Doug Helton told us the CNX80 will be capable of flying the FAAs new LNAV/VNAV approaches-these are basically non-precision approaches with vertical guidance to a high minimum descent altitude. It will also be capable of flying GPS precision approaches, when these become available. Helton told us upgrades to the CNX80 will be provided to owners as software revisions along with replacement databases.

Unless someone pulls a rabbit out of the hat between now and May, when UPS says the CNX80 will be available, this box is the first WAAS-capable navigator.

It Talks
UPSAT already has a well-integrated line of avionics and the CNX80 pulls some of this capability together. For example, it ties into and provides position data to the MX-20 display. If the MX-20 has Chart View, it will automatically call-up the appropriate approach plate when an approach is selected on the CNX80.

The navigator is also configured to work with a remote transponder, essentially the SL70 digital unit without a faceplate and mounted remotely. This is a unique feature and ought to be well received for owners who lack extensive panel space. Of course, there may be a tradeoff, too. Youll have to diddle with the navigator to set a transponder code.

The CNX80 will also accept weather data from external sensors, such as the Stormscope WX-500 and, we presume, eventually datalink weather. Nothing firm on that yet from UPSAT. It will display traffic from the Goodrich Skywatch system and the Ryan TCAD, according to UPSAT. For a spec sheet on this new navigator, check out www.upsat.com/cnx80_gen.shtml.