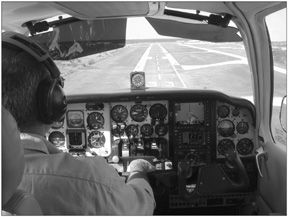 At some point in the not-too-distant past, we can honestly say there was something of a frenzy over the FAAs GPS augmentation project, better known as WAAS. The idea of having an ILS-like precision approach into every backwater airport in the land had an intoxicating appeal. Then, WAAS encountered delays, then more delays and finally, pilots who once desperately wanted this upgrade realized they could live without it. (We wonder how many sold the airplane and bought an RV.)

For a certain select set-specifically, buyers of Garmin ATs CNX80/GNS480, the wait is over. As of late summer 2004, WAAS finally slipped quietly into town in the form a simple but sophisticated software upgrade that allows augmented GPS to at last earn its keep by providing approaches with ILS-like vertical guidance. The day of Cat I mins to your local muni hasnt quite arrived yet but you can see it from here.

We test flew some vertically guided approaches with Garmin ATs navigator and can honestly report that were impressed, despite that fact that only a handful of airports have published procedures. In reality, this is a mere technicality, for the latest database revisions have the necessary waypoints to allow vertical guidance; the FAA simply hasnt published legal minimums.

It will be at least two years before we see large numbers of so-called LNAV/VNAV and LPV approaches from the FAA and longer than that for widespread deployment of WAAS capabilities. In the meantime, the vertical guidance is there for the taking, if you have a CNX80/GNS480, install the software upgrade and have the most recent database revision. The salient question, then, is this: is it worth buying a GNS480 for this capability and/or waiting until it becomes available for Garmins GNS430/530 series or the Bendix/King KLN94? We lean towards a waffling, qualified we-dont-think-so answer to both options.

WAAS Status
WAAS-for wide area augmentation system-has been out there for awhile. The WAAS signal actually became available in fall of 2000 and for hikers, bikers and drivers, its old hat. Garmin made its color portable GPSMAP 295 WAAS-capable but for aviation use, this was more curiosity than practicality. But you could find your tiedown in the densest fog. As currently configured, WAAS consists of 25 ground reference stations, two geostationary satellites, two master stations and four uplink stations. Taken together, these elements detect minor errors in the basic GPS positioning service and broadcast wide area differential corrections back to receivers through the two geostationary satellites. WAAS dramatically improves vertical precision and also provides a rapid integrity alarm that flags the receiver if the navigation solution becomes suspect.

Going forward, by employing WAAS, the FAA hopes to provide Cat I ILS-type precision approaches to most airports in the country, which means decision heights of 200 feet above touchdown and 1/2-mile visibility, when approach lights are available. However, the FAA now says WAAS probably wont be able to perform to the 200-foot HAT until GPS satellites are equipped to broadcast a second civil frequency, the so-called L2C. Military users already have dual frequency capability (L1/L2), a technology which substantially improves both accuracy and reliability. The second civil frequency was announced by the Clinton White House in 1999 but isnt scheduled to begin deployment until at least 2005, with a third GPS civil signal following later. Until those frequencies are in place, says the FAA, WAAS wont reach full Cat I status until between 2013 and 2019.

Not that it matters much, frankly. Obviously, 200-foot DAs are more desirable than 250-foot DAs, but we doubt if this will make much practical operational difference to most pilots. At many airports, lack of lighting and other facilities plus obstacles, will make the lowest possible minimums unachievable anyway. Having vertical guidance to a DA somewhat lower than current non-precision MDAs is a plus, in our view.

WAAS Ready
First, a clarification of model nomenclature. Before it was bought by Garmin, UPSAT introduced the color mapcomm CNX80, a model designation Garmin continued after it acquired UPSAT. From its introduction, the CNX80 was WAAS-capable, although it lacked the necessary software to perform vertical navigation. To upgrade a CNX80 for vertical navigation, you have to send it back to the factory for a free major software revision, but the hardware remains untouched except for a minor component replacement. Going forward, all new versions of this product will be designated GNS480s, in keeping with Garmins model naming conventions in the 400/500 lines. But the two are identical, except for the bezel labeling.

Speaking of the 430/530 line, when will they become WAAS upgradeable? The installed base of GNS430/530 navigators is enormous and at least a portion of those owners-however small-will want the WAAS upgrade. Garmin has irritated some of these customers by pushing the upgrade back and now promises it will be available in mid -2005. It will be a hardware/software upgrade costing no more than $1500 and requiring a trip back to the factory to complete. We havent seen any operational details on how the 430/530 will incorporate WAAS but we suspect it will be similar to the CNX80, which is to say largely seamless. You merely select the approach you wish to fly and the receiver does the rest, assuming it has the vertical waypoints in the database.

For CNX80 owners upgrading to WAAS approach capability, nothing much changes operationally, with the exception of an additional navigation page depicting an electronic HSI with glideslope and other useful nav data. Further, assuming the CNX80 was installed correctly at the outset, the WAAS upgrade requires no additional installation work. The new software upgrade does add some interface functionality, including TIS and Skywatch traffic inputs and other new external sensors UPSAT promised from the beginning.

We flew with Baron owner Richard Hardoon, who has a CNX80 with one of the first WAAS upgrades. In Hardoons airplane, the navigator outputs to a Bendix/King KI825 EHSI. Hardoon told us the KI825 offers user selectable data bus capability with a choice of ARINC 429 or RS232. He noted a lack of correct glideslope sensing when the ARINC data option was selected but this shortcoming appears unique to the KI825. The upgrade is still too new for other customer reports.

Flying It
Flying a WAAS approach turns out to be underwhelmingly simple. In fact, its no different than flying any GPS non-precision approach. In the CNX80/GNS480, an airport with approaches needs to be in the flightplan or selected as an active waypoint. Using a menu option, you select the desired approach, then decide whether youll enter it through vectors-to-final (VTF) or via a named waypoint. Once thats done, everything else is automatic.

Although three types of WAAS approaches will be available, the receiver determines which one you can fly, based on its calculated estimate of position accuracy. If precision is within the 50-meter vertical and 40-meter horizontal containment limits, the receiver will provide full vertical guidance to either LPV or LNAV/VNAV decision altitudes. An approach annuciator at the bottom of the receivers HSI page indicates which type of approach is being flown. Its color coded and turns from green to amber if precision limits are exceeded. If nav precision degrades below these limits, the receiver will allow the pilot to fly an LNAV, with no vertical guidance; essentially a GPS non-precision approach.

Its accurate to call a WAAS approach ILS-like. In fact, it would be an ILS, save for the lack of the traditional ground equipment. Without any baro assistance, the receiver calculates the equivalent of a 3-degree vertical path from the final approach fix to the missed approach point, which is near the threshold on most runways. It automatically terminates vertical guidance at the threshold, regardless of altitude.

In flying the RNAV/GPS 33 approach into Kissimmee, Florida, we watched the glideslope indicators on both the KI825 and the receivers display slide smoothly down from off-scale high to a centered position, on the glidepath.Flyability and needle response is actually noticeably smoother than youd expect with an ILS, since theres no signal degradation or scalloping caused by local terrain effects on a ground-based glideslope. Obviously, the calculated path is well smoothed by GPS software.

We checked with the FAAs Brad Rush, who oversees development of WAAS approaches, and he reports that flight check crews find that WAAS approaches appear to exhibit fewer problems and fly more smoothly than do traditional ILS procedures.

Thus far, only a handful of WAAS procedures have been published, between 30 and 50. An additional 150 are planned for next year and about 300 more are planned for 2006. However, the GNS480 will still fly the vertical profile of any published approach, since the receiver itself calculates the path and doesnt rely on a unique database for the vertical dimension. Whether you choose to fly the vertical path or not, it will be displayed when the approach is selected. On our test flights, the glideslope indication on the receivers HSI page vanished at about 150 feet above the threshold, just as its supposed to.

Vertical guidance without published minimums represents a significant safety issue which early users will have to monitor. Although the glidepath follows a 3-degree slope to the threshold, that doesnt mean the vertical path will be clear of obstacles. Until you have published LPV or LNAV/VNAV minimums, dont dare descend below the LNAV published MDA using vertical guidance without being in visual conditions. Its tempting to follow that rock-solid glideslope indication to the bitter end but doing so could have an equally bitter end game.

Conclusion
Should you run out and buy WAAS right away? If you already own a CNX80, by all means, yes. Its a free upgrade and having vertical guidance on non-precision approaches is a definite plus. It makes for a smoother, safer approach. Period. Garmin 430/530 owners who want WAAS approaches right away will have to switchover to the GNS480 which, in our view, makes little sense unless there are other considerations. Other considerations might include adding the MX20 multi-function display, which performs better in displaying weather, traffic and approach plates than does the GNS530. We would budget about $18,000 for such an upgrade, not to include the weather and traffic sensors.

If you own neither a CNX80 nor the GNS430/530 navigators, the choice is not so simple. You can buy WAAS now in the GNS480 or buy it later in a GNS530, an upgraded version of which is predicted to have a faster processor and additional capability.

While the vertical guidance is certainly a nice-to-have, how many GPS approaches have you flown in the past year? (Weve flown exactly one.) Owners based at outlying airports who fly frequently in weather will gain definite operational and safety benefits from WAAS. For the rest of us, theres no hurry to have it.