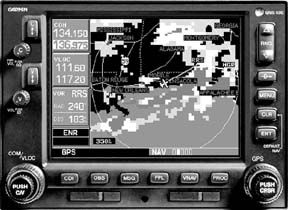 By our guessestimate, there are about 3500 datalink systems of various types in the world of small aircraft GA. Thats more market penetration than we would have expected and enough to gain informed perspective on how this datalink idea is working.

The upfront summary: owners tell us you gotta have this thing; all of the users we spoke to-15 between e-mail and phone conversations-say they love having weather data available in the cockpit, even when the system doesnt work all that well. (That turns out to fairly often with a couple of the systems.) We interviewed or exchanged e-mail with users of all of the popular systems and found that most owners are pleased with having installed datalink. But some are more pleased than others. The top-rated systems seem to be Bendix/Kings Wingman service and WSIs satellite-based InFlight weather which, although new, still has quite a few systems flying.

Owners were less thrilled with Garmin GDL49/EchoFlight system and the new Avidyne datalink system, both of which use the low-earth orbit Orbcomm systems to deliver data to the cockpit. When these systems work, theyre fantastic, say owners, but downloading can be slow; several complained of long periods of no service availability.

Bendix/King
We were surprised that Bendix/Kings ground-based Wingman Service fared as well as it did. The system is expensive and relies on a network of VHF ground stations that we thought would take a decade to build out. Wrong.

The system offers good coverage from Denver east at altitudes as low as 2000 feet but reliably from 5000 feet and higher, owners tell us. Wingman Service offers something the others dont: bandwidth. The satellite systems are excruciatingly slow, says George J. Yundt, who flies with the Bendix/King system in a Twin Commander. Ive never not been able to get what I want out of it, he adds.

Another owner, Ed Bannen of Westerville, Ohio, researched all the datalink systems and went with Bendix/King for his Cessna 182 a year ago. I think it is the best system out there for many reasons: the highest data rate; 31.5 kps vs 4.8 kps [ for satellite systems]…easy to use with automatic updates versus request reply…it gives something for free if you dont subscribe to the monthly graphic service. All text information is free, he says.

Thanks to the high bandwidth, the NEXRAD resolution is quite high; 2 miles versus the 12 miles offered by other systems. Further, the coverage is essentially nationwide and not limited to the region you happen to be in.

Any beefs with not having weather data on the ground before takeoff? Not really, says Bill Unternaehrer, who tools around the west in a King Air equipped with a full Bendix/King IHAS system. Most FBOs of any size have online weather of some sort so the go/no-go decision can be made in the briefing room, not on the ramp with engines running.

WSI
Although WSI is too new to the datalink game to evaluate with a high degree of confidence, we nonetheless heard from four users of this new system, all of whom reported positively on its performance. As our own flight test revealed, the WSI system is fast and the interface is easy to use, both of which are high on the list of things pilots seem to want datalink to do.

John Rifle, a Florida-based pilot of a Citation, uses WSI InFlight with a pair of Fujitsu electronic flight bag tablet computers. He says the systems strength is its ongoing automatic update, with no effort required on the pilots part. As with the Bendix/King offering, the latest weather is always available; the pilot merely has to select the viewing option.

Rifle offered a comment that surprised us. Although weve maintained that datalinked NEXRAD is likely to be too stale for tactical penetration, Rifle says thats not necessarily true. He believes the WSI system delivers the NEXRAD imagery quickly enough to be useful for conservative tactical thunderstorm decisions. It may not be real time, but its close enough that you cant tell the difference. Things dont change that much in five minutes, he says.

Rifle says he wouldnt hesitate to penetrate broad weather areas with datalinked NEXRAD alone and given the choice of onboard or datalinked radar, he would choose the datalink.

The system is always on and displays fast on the MX20, says Bonanza owner John Scherer of the WSI system. Ive been flying since 1969 and I consider this, along with TCAS, which we also have, to be the two best advances Ive seen.

Garmin GDL49
Garmin fielded the satellite-based GDL49 datalink system a year ago and our impression is that theres a considerable number of these units flying. The GDL49 displays its retrieved weather on either the GNS430 or 530 color mapcomms. Owners generally like the menu-driven interface and find it easy to retrieve the weather they want and they characterize the weather products as appropriate.

Unfortunately, getting that weather can be frustrating, owners tell us. First, the request has to be sent to the satellite, processed, then returned for display. (This can be automated) Under ideal circumstances, this takes a few minutes but all of the half-dozen GDL49 owners we heard from complain about slow response times with this system.

The system works well…but the delay-10 minutes at best-means that you do not get accurate enough information to use for flying between weather…the overall picture is of good use. At times, the download takes a while. Usually, Ill get an e-mail the next day that they had a system problem. There have been times when the system showed some pretty nasty red stuff close to me and looking out, you see nothing. It makes you wonder what its seeing, writes Joseph Montineri of West Hartford, Connecticut. Nonetheless, says Montineri, having weather in the cockpit is awesome.

Says Russ Otto, of Cleveland, Ohio: While the potential operation of the GDL49 is certainly excellent, there are glitches that are only marginally addressed by Garmin and Echo Flight. Erratic download times, which vary from two minutes to over a half hour is the major problem. Otto says he talked to Garmin and that the company says its working on improvements but complains that users are often blamed for the systems shortcomings: Anything that happens is never their fault, even if they are at fault. Even if their unit or downloads fail, break or are inop, he adds, frustrated that the system hasnt been improved by now. Garmin is good. But they really need to address the download time problems with the GDL49.We are hanging in there for now,adds Otto.

Several other customers arent as sanguine and told us they wouldnt buy the GDL49/EchoFlight system again, given the increasing competition from WSI and WXWorx. Marc Dulude, a Boston-area Ovation owner with an all-Garmin panel, believes that Garmin needs to fix the GDL49s performance shortfalls quickly or face growing customer ire.

We asked Garmin about fixes for the GDL49 and were told the company is working on them. Given Garmins technical prowess and record for good customer service, we wouldnt write this system off yet. But with gorwing compeition from WSI, Garmin needs to improve it, since the competing systems get better marks from users.

Avidyne
Our impression is that Avidyne-which also relies on the low-earth-orbit Orbcomm system-is in similar straits as Garmin, but with one important difference. Even though the system seems to suffer the same delays and loss of service as Garmins GDL49, onwers like the interface and display so much, theyre willing to suffer.

We operate a Cessna 421B equipped with the Avidyne EX500. The receiver/display is fantastic!The update rate leaves a little to be desired. I have been in contact with Avidyne and they say they are changing primary weather service providers in the next month…I expect the update rate to improve. I have also flown with the MX20/WSI combo and found it to be great, with a faster update rate than Avidyne, writes A. C. Schmieler.

Another user we interviewed, Ken Perrino, installed an Avidyne EX500 MFD in his Aztec. On a trip to Oshkosh in July, he reports that the system worked well on the outbound leg and not at all on the return leg. It was evidently having trouble seeing and locking onto the satellites. Like reader Schmieler, hell stick with Avidyne but he wants a fix. Two other users we interviewed reported only minor service delays.

Avidyne told us its working on network upgrades and processing improvements that should speed up the data transfer and enhance performance. Well look at this again in a few months.