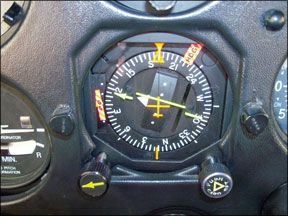 Weres the common scenario: An owner plans to finally make the plunge to a glass PFD as soon as the aircrafts Jurassic-age analog heading system finally quits. Then it does quit and the dream of adding glass to the six-pack shrivels to budget-stressed reality.

Even bottom-line pricing for even entry-level flight display retrofits is far more than it will cost to overhaul or even replace the existing 30-year-old mechanical HSI. While its likely not how you want to spend upgrade money, in some cases it

does make sense to repair the dinosaur or upgrade to newer-but still analog-system.

We think there are two analog HSI systems worthy of keeping, or even installing in the right cirumstances: the Century NSD360A and the Bendix/King KCS55A.

The NSD360A is a non-slaved (which means you need to correct for gyro precession as you would a plain-vanilla DG), vacuum-driven and self-contained model thats found in various flavors. The double-edged sword with these is that the low entry cost comes with limited life between overhauls and a complicated design of finicky belts, gears and meter movements. A complete overhaul of this unit from a top-drawer instrument lab is just shy of $3000.

Theres also a slaved version of the instrument thats driven by a magnetic heading flux sensor and slaving amplifier. Unfortunately, that adds the potential for slaving component failure. Doing a partial repair to these instruments is money wasted. A real overhaul is usually what it takes for another couple of years worth of service.

Bendix/Kings once flagship, all-electric KCS55A system is far more failure resistant. But when the system does fail, get ready for an impressive shop bill. Thats because there are two high-priced components: the KI525A HSI and KG102A remote electric heading gyro. An overhaul or exchange of either one is several grand. Some earlier KG102A gyros arent worthy of exchange or overhaul due to parts obsoletion, so your only choice could be a new or salvaged one.

Heading failures arent always related to component failures, either. The wiring harness for this system is complex and there are numerous junctions and interconnects littered throughout the airframe. Thats why installation of this desirable system, even a good used system, is a major project. You can find complete KCS55As for about $2500 (see sidebar), so getting used parts to replace isnt the issue. But there may some serious shop time to track down a fault in the wiring.

The takeaway here is that if you have one of these two systems, repair or replacement is an option that makes sense. No shop in their right mind would attempt doing any kind of billable repair to old Narco models like the DGO series and later HSI100. In our view, these should have been in the rubbish barrel years ago.

No matter what model HSI you have, you owe it to the airplane to at least price the Aspen EFD1000. If you do any kind of IFR flying, dont even consider the entry-level Pilot model from Aspen. Roughly $7000 gets you into the world of glass, but this display doesnt have an electronic CDI presentation. It does overlay GPS course data on top of a digital directional display but theres no glideslope, flags or autopilot interface. We know a Mooney owner who chose the Pilot model and just months out of the shop has buyers remorse. Upgrade is possible but expensive.

A complete single-screen Aspen Pro PFD project can better $14,000, depending on the interface and aircraft. Weve always viewed this as a solid value given the huge leap in capability and relative ease of installation. But its still a big job thats

Upping the ante is Garmins G500/600 retrofit PFD/MFD. This means serious amounts of panel modification/replacement to make that big screen fit and more remote boxes. Garmins G500 is a lower-end version of the G600, with functions like Synthetic Vision, charts and autopilot gyro emulator as la carte options. A typical G500 install might be double the price of an Aspen EFD1000 Pro.

Before you give up on glass, consider going halfway there with a standalone Electronic HSI (EHSI).

EHSIs arent really standalone because they still need a heading system. This can be an easy install or a budget-buster. The Honeywell KI825 ESHI can drop into an existing KCS55A installation, replacing the KI525A and using the existing remote KG102A gyro and magnetic flux gate. The KI825 has a rugged feel, easy feature-set and good display. If only it was reliable.

Weve heard from a handful of KI825 owners who constantly battle failures of these units. Repair is pricey and awkward, and one operator stocks several spares on the shelf because failure, he says, is guaranteed.

Sandel SN-series EHSIs are a better bet, and can also utilize the KCS55A gyro and flux gate. We would avoid the first-gen SN3305. It had growing pains and install hardware that wasnt rugged enough. The 3305 has a projection lamp replacement interval which isnt a big deal, except removing the unit from the aircraft to saddle up to the repair bench opens a can of worms. This disturbs those finicky connectors that can make an otherwise functional system nearly useless.

The SN3500 is far more rugged and capable. It has an impressive reversionary attitude function thats driven by that solid-state AHARS. A remote AHARS is connected to a panel-mounted switch that toggles between EHSI and attitude while retaining the heading display. This is an excellent way to back up a failed primary horizon gyro or for full-time display. A new installation should be compared

closely with an Aspen, which, admittedly, does far more.

The SN3500 would be a better option if it was more price competitive. The unit is $11,419, with an extra $980 for reversionary attitude system, and $4495 for the AHARS that drives it. That puts the system at almost $17,000 without the install costs. So it could be right if you just needed to replace the HSI portion of a KCS55A, but we think the Aspen is a better value overall.

An important point to remember with any mechanical HSI system is that regular maintenance is required. But that isnt always a big deal, nor does it mean that a major component of your HSI system is toast. It could just be a calibration problem.

Maybe youve grown accustomed to compensating for that 10-degrees worth of error or the classic fist pound on the instrument panel to make the glideslope needle come into view on an approach. The good news is that minor issues like these can be addressed without shot-gunning major components. Consider the heading alignment procedure for the KCS55A. Essentially, this is a glorified compass swing but requires specialized skills and equipment. First, theres the remote flux valve thats adjusted to remove large amounts of heading error. Then, fine tuning of the panel-mounted slaving meter to tweak out small amounts of remaining heading error. Similar procedures are required of a slaved NSD360A system.

Its not uncommon for heading error to show its head after annual inspection or other maintenance where the flux might have been disturbed. If this is the case, get ready for some shop time to get the system back within specs.

Given the age of the average HSI system, we think its a smart idea to plan for repair or upgrade in the maintenance budget. The system will fail at some point and even the cheapest fix will run several grand.

The success of the Aspen Pro model speaks for itself. It seamlessly displays full-stack navigational data on a single screen, and is an easy step into glass and GPSS steering for your autopilot. However, budget nearly always drives the decision and we think investing $6000-7000 on a well-maintained Bendix/King KCS55A install is a viable option.

Going glass instead of staying analog has one extra advantage: It may nip buyer remorse in the bud, which is what you might have when you reluctantly spend money on old, yet proven reliable, technology.