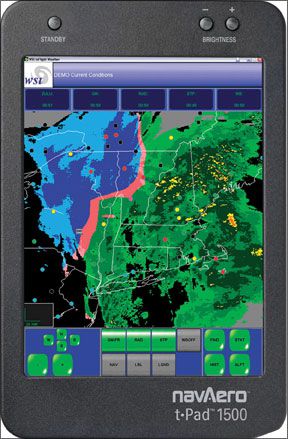 ile its a stretch to say everyone flies with datalink weather gear, were certainly seeing more of it by the month. Garmin, with its XM-based WxWorx systems, dominates the market with others-Bendix/King and WSI-running far behind.

It shouldnt really be this way, however. Despite the current XM hoopla, WSI (Weather Services International) was first out of the gate with reliable satellite-based weather, but was quickly outpaced by XM-based systems for two reasons: WSI ran into unresolvable technical snags with their satellite technology and they fooled with Mother Nature: They reverse-engineered a GNS400/500 interface without Garmins cooperation, effectively stunting vibrant growth.

That should have been enough to kill WSIs weatherlink efforts, but to their credit,

the company has come back with a new datalink box and is signed on with Sirius Satellite Radio as the pipeline provider. Further, Avidyne is marketing their own version of the WSI system.

WSI says the decision to abandon its launch satellite provider and join with Sirius not only provides for a wider service area but also allows for growth and longevity through product enhancements. Thanks to the three-satellite Sirius constellation, WSI coverage can be had well into Canada as well as south into the Caribbean. Further, the ability to receive both Sirius entertainment programming and WSI weather through a single receiver meets the increasing demand for satellite entertainment in the cabin.

The new receiver fixes a big problem WSI ran into with its customers starting in 2003, when it introduced two new datalink receivers, the AV-200 and AV-100, the former a certified box for panel mounts, the latter for portables. WSI contracted with a third-party satellite provider for the datastream and used its own inhouse expertise to create weather products for pilots called Inflight service.

The products were well received, but there was trouble brewing. Because of satellite technical problems that WSI said it couldnt resolve, owners experienced dropped coverage in some parts of the U.S. Further, some owners were miffed to learn that WSIs aggressive backdoor reverse engineering of the Garmin 400/500 series interface wouldnt work with navigators upgraded to WAAS. Understandably, this sowed lots of bad will in the market among owners who spent $5000 or more for an obsolete box.

WSIs response to this has been forthright, in our view. It got busy with a new pair of datalink receivers-the Sirius-based AV-300 and AV-350-and these are now becoming available. For owners who now have the older WSI boxes, which will become dysfunctional in February of 2008 when the old satellite network is abandoned, the company promises a seamless and cost-effective Sirius transition, but not without a trip to the avionics shop for a change in receiver hardware.

For owners of AV-200s, the swap-out to the new AV-300 should be relatively painless. Since the AV-300 can use the same serial data wiring installed for the AV-200, the changeover requires only nominal rewiring. The 1.6-pound receiver, a -6

by 8- by 1.5-inch remote box, should fit nicely in the same area occupied by the AV-200. The biggest challenge could be accessing the old satellite antenna and replacing it with the new Sirius teardrop antenna.

Mounting the new antenna should be a snap, since the footprint and mounting holes are the same. But interior components and headliner access can be a nuisance, especially in pressurized aircraft where pressure vessel integrity must be maintained.

If the AV-350 receiver is installed, providing both datalink and Sirius entertainment, techs will need to interface the box with the aircraft audio system. We think the interface is dandy, but some old audio systems can render the otherwise flawless Sirius audio quality worthless, thanks to unshielded or poor wiring.

Sirius entertainment is controlled and tuned via a remote control unit that can be passed around the cabin, since the Avidyne and other displays dont offer on-screen tuning. We think this is a compromise, but its the only choice for now. Note that Garmins XM Radio interface offers pilot-controlled, on-screen tuning and full audio control on all of their latest displays. Thats entertainment integration to the fullest.

Pricing for the AV-300 transition for InFlight who already own an AV-200 is $1200, which is refundable via a check from WSI if the customer signs up for a year of service. That makes the new equipment purchase a wash. Not a bad deal as these things go. For AV-300 purchasers starting from scratch, the system costs $3688, plus installation. The cost of the AV-350 is $5290, plus the cost of a Sirius radio subscription and install.

Avidyne has joined the Sirius party, too, marketing a receiver dubbed the MLB-700, for delivering WSI weather on the EX500 and EX5000 MFDs. It has a list price of $4745. A version of the MLB700 is available with Sirius entertainment at a price of $5495. Regardless of the receiver, all Sirius entertainment subscriptions are priced and handled through Sirius directly, not through WSI.

L-3 Avionics recently announced a Sirius interface for their newly introduced integrated glass cockpit, the SmartDeck. For cockpits that once seemed dominated by XM, Sirius is making what may turn out to be a serious run at competing.

Despite the change in data delivery, WSI InFlight continues to stream the same reliable and handsomely-worked-over weather products including WSIs proprietary NOWrad radar mosaic. Updated every 5 minutes, NOWrad is a mosaic of the U.S. Doppler network thats been fine-tuned by WSI meteorologists for a more realistic depiction of precipitation.

Its a simple-to-use but complex concept; WSIs NOWrad accuracy relates to

transmitted bandwidth quality and, evidently, post processing of the image. It yields larger and more defined radar features that appear more detailed than XMs. To save bandwidth is to compromise features through the smoothing or blending of smaller pieces of an image into one large one. Bottom line: WSIs radar images are less blocky looking than XMs. NOWrad images show composite reflectivity-or the largest level of reflectivity-found through the entire vertical length of the atmosphere. NOWrad images are ultimately inspected by staff meteorologists where any false radar echoes (data not recognized from an earlier computer scan) are thrown away. This is the rare instance where the trained human eye has one up on computers.

Another feature specific to InFlight and featured only on the standard subscription level menu is a radar summary. This product focuses on storm details, drawing attention to the speed and direction of cell height and their movements, as well as the presence of hail. WxWorx does something similar with its storm tracks feature.

A pilot of a Piper Arrow equipped with a WSI AV200 and MX20 display told us that this product nearly saved his hide on his yearly voyage to New Mexico when he faced a line of storms rising well into the 20,000-foot range. Deviating around such massive buildups using a Stormscope alone would have been hairy, he told us. The radar summary attempts to put storms into a third dimension, making tactical deviation less of a guess-and-hope game.

For the time being, the WSI receiver has good display flexibility, but it wont play with the big dog: Garmins new W or WAAS-capable GNS400/500 series boxes. Garmin doesnt make non-WAAS or legacy GNS units any longer and the Garmin GMX200-to which many existing MX20 owners are upgrading-wont play the WSI box, either.

This creates a problem for both existing WSI owners and for new prospects. For this reason, we cant see WSI grabbing a huge number of new datalink customers in the panel-mount market. To WSIs credit, there are rich interface choices between the AV-300 and portable devices such as EFBs, tablets and so on. But portable means loose wires in the cockpit, which many owners are trying to avoid. Owners are going as far as semi-permanently mounting Garmin GPSmap496 units to banish stray wires.

Interestingly, when we contacted WSI shortly after the Sirius option was announced and asked about interface potential, we were told by a salesperson (without provocation) that “Garmin wont let us play on their new units.” Disharmony hardly describes the relationship between Garmin and WSI. We see this as bad for owners and bad for shops trying to support existing interfaces. But its great for Garmin, who will sell more GDL69 XM receivers as result of this discord.

As datalink technology has matured, we find that pilots are still interested in a select core group of weather products which include NEXRAD, winds aloft, METARS, TAFs and perhaps lightning. While the other products might be gravy, most owners can do without them, saving $20 per month.

We think WSIs latest pricing structure puts InFlight on a level playing field with WxWorxs offerings. We also believe that WSIs NOWrad radar has a slight edge on XMs NEXRAD image due to processing differences. Well look at that in detail in a future issue. Either version of real-time radar will get the job done. But the deal breaker for us and for many owners is WSIs inability to play on Garmins GNS530W, GNS430W and GMX200 displays. It can play on legacy GNS units and on old MX20s, but with so many owners upgrading to WAAS, this is a moot point. In our opinion, if WSI doesnt make nice with Garmin, XM could remain the dominant datalink choice.