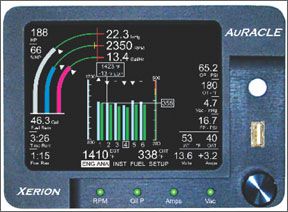 e not-so-distant past we would say about 1998 or so the multi-probe engine monitor graduated from the nice-to-have-in-the-panel to the certain to be found, at least in airplanes with large displacement six-cylinder engines or turbochargers. And just as certainly, its way overdue for a makeover. Although the basic device has been improved incrementally since it first appeared, were just as tired of the abstract dancing orange bars as is everyone else. Its time for something new and an upstart company called Xerion Avionix promises just such a

product with no less an ambitious name as the AuRACLE and Auracle II, both multi-probe monitors with lavish color screens that make the orange bars appear as just what they are: dated anachronisms.

Xerion proposes and has just about succeeded to certify a new class of engine monitor that provides the usual functions were all familiar with, such as leaning, CHTs and EGTs. But it goes traditional monitors one better by offering legal replacement for required power and engine instruments, thus potentially freeing up some panel space. And thats a good thing, because the potential buyer of a Xerion will need the room. Its a big instrument, measuring 6.2 inches wide by 4.5 inches high and 2 inches deep. The required cutout is 5.75 by 4 inches.

As we go to press, Xerion reports a bag full of orders and said it was within weeks of obtaining FAA certification so it could ship approved hardware. We flew the system in demo mode in a Bonanza A36 with Walter Atkinson, of Advanced Pilot Seminars. APS, with its well-regarded body of engine operating knowledge, has advised Xerion with feedback on the AuRACLEs design.

Despite its odd sound, Xerion is not one of those made up words irritatingly applied to Japanese cars, but is instead a genuine Greek word, in this case semi-irritatingly applied to modern marketing. Xerion emerges from the mists of antiquity as a red powder purportedly capable of turning metals into gold. (You can see where this is going and other companies have appropriated the word, too.)

Xerions three principles Eric Hathaway, Wayne Carl and Susan Dalton found their way into piston engine management by way of the world of Part 25 transport category aircraft and commercial helicopter instrumentation. All three worked on a design team in that market segment.

Xerion has brought a fresh eye to what has become stagnant development in the engine monitor market. The nutshell explanation is that the company has applied leading-edge hardware and software to do for the engine monitor what glass panels have done for flight instruments. We wouldnt be surprised to see this monitor gain a rapid foothold alongside the emerging second-generation glass panels such as the Garmin G600 mentioned elsewhere in this issue.

There are two versions of the monitor, the AuRACLE I and II. The two have identical functionality and form factor, but the latter uses controller area network technology commonly found in the auto industry which will simplify wiring and increase resistance to electrical noise. The AuRACLE I retails for $4500 for four-cylinder models and $5875 for a six-cylinder model. The AuRACLE II retails for $6650 and $6995, for fours and sixes, respectively.

Apart from finding a large enough cutout hole in the panel, installation should be straightforward and made easier by the fact that the product will plug directly into a JPI harness. However, if an owner is buying the full bag and hopes to use the AuRACLE to displace existing engine and power instrumentation, removing those gauges from the airplane and re-jiggering the panel may add considerable expense. And presumably, if the existing JPI wiring harness doesnt include oil and other probes, those will have to be added, as will MAP and RPM sensing.

And speaking of MAP and RPM, Xerion brings to the party some things engine monitors havent traditionally done, such as percent power display. Lacking torque data, the AuRACLE calculates this based on mass airflow when the engine operating rich of peak and on fuel flow when lean of peak.

Other sensing includes fuel flow, EGT/TIT, CHT, volts and amps, vacuum and a datalogging every two seconds for up to 250 hours. The data, in a non-proprietary format, can be downloaded via a front-mounted USB port and post-analyzed with EGView or any spreadsheet software.

Where dancing-bar monitors are largely abstract displays with digital information shoehorned into the corners, the AuRACLE is primarily a graphic presentation device, with digital values readily available. Its display of engine operating trends is direct and unambiguous.

Manifold pressure, prop RPM and fuel flow are represented by three always-visible arcs in the upper left corner of the display. These are color coded gray for MP, blue for RPM and magenta for fuel flow or mixture. The AuRACLE capitalizes on its color LCD display by tinting the arcs yellow or red to signify caution or out-of-limit conditions. At the end of each arc is the digital value for each of the three parameters and each arc can be bugged with a user-settable electronic caret to indicate the desired cruise value.

Because its capable of displaying so much information, the AuRACLE cant get it all on one screen so, like a GPS navigator, it has four pages that you can toggle through with the large knob, one of two controls the device has. (The other is a single white button that engages leaning mode or acts as an escape key; more on that in a moment.)

Front and center on this first page are cylinder EGT/CHTs, with the former light blue and latter green. Individual cylinder bars are situated next to each other so if a fouled plug spikes the EGT and depresses the CHT, youll see which cylinder it is at a glance. You can obtain precise digital values for each cylinder by cycling around the horn with the large knob or setting up a scan mode, as with current generation monitors.

A second page called the instrument page shows analog representations of oil temp and pressure, amps and volts, with the actual digital value superimposed below the clock faces. A fuel page displays a detailed graphical and digital representation of fuel remaining and a setup page allows you to tell the thing how much fuel is aboard the airplane. And as with any fuel totalizer, thats a must, for Xerion has intentionally offered legal replacement for everything except the onboard fuel gauges.

Just to keep from overlooking the dreaded simultaneous alternator and vacuum pump failure while youre setting up the fuel page, the AuRACLE has four idiot lights for RPM, oil pressure, amps and vacuum along the lower bezel. Youd have to be dead to miss this things warning modes.

For acolytes of lean-of-peak operation, for whom the products name may have a subliminal appeal, the AuRACLEs leaning mode is a revelation. It has something called SmartLean, which takes the lean find mode monitors have traditionally had to the next level.

“It allows someone whos used to the big mixture pull to get quickly to the lean side, engage SmartLean and then identify the first cylinder to peak,” says Xerions Eric Hathaway. You can do the same with a traditional monitor, but it takes more to-and-fro effort than the results are worth.

Once youve leaned to your satisfaction, the AuRACLEs cylinder display can be left in sawtooth mode or normalized, so all the bars are leveled and an out-of-limits condition is thus graphically obvious. In addition to graphic warning mode, the AuRACLE is capable of displaying out-of-limits warnings in a red-bordered box that include high/low limits for everything it monitors, including CHTs, fuel, amps and so forth.

Although weve flown only one demonstration with the AuRACLE, were impressed with its design and performance and we like where its going. Even without an operating manual, we found it a breeze to cycle through the devices various pages and capabilities. Weve been flying bar-type analyzers for many years and, frankly, were bored with the display.

The AuRACLEs intuitive use of color readily delineates each function and easily identifies out-of-spec conditions, something other monitors dont do as well. In the certified market, the only monitor that approaches what Xerions AuRACLE does is J.P. Instruments EDM-900, the large form factor follow-on to JPIs successful EDM-700 and 800 series. The EDM-900 contains some of the AuRACLEs functionality, but the display is busier and lacks the AuRACLEs use of vibrant color.

For as much as we like the AuRACLE, it has one drawback that will be a dealbreaker for many would-be buyers: its large physical size. For instance, we might be able to shoehorn the AuRACLE into the congested panel of our Mooney, but it would take major surgery (and dollars) to find space for it. We doubt if even removing the manifold pressure gauge and tachometer in the far right of the panel would make enough room for the AuRACLE.

Owners of Malibus, Saratogas, Bonanzas, Cessna 210s and later model Cessnas higher dollar rides that can justify both the cost of the instrument and the installation invoice to remove the old instruments will have no trouble finding physical room for the AuRACLE in their larger panels. But the invoice might come to north of $8000 to do it.

Xerion appears to be trolling in the upper end of the market with the AuRACLE and will likely create brisk demand at a price point that doesnt now exist in the monitor market. But for the rest of us, our short wish list is for a smaller version that would fit into a round instrument hole. While we understand that small companies like Xerion have sharply limited resources to devote to product development and cant cover the board with the first introduction, we also know that all companies need follow-on products.

What we would most like to see is the AuRACLEs features in a smaller monitor not intended to replace existing engine instruments, as shown in the mocked-up illustration above. We think the breadth of the market will be found with such a product and we predict it would be as close to a smash homerun as any product might be. Well be standing by to see where Xerion goes with its intriguing technology.