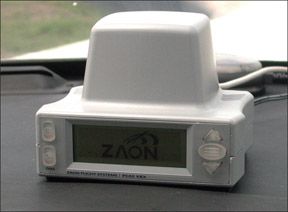 Because the FAA seems to want to lay its mitts on everything thats bolted or wired into an airplane, an alternate universe of portable devices has evolved, including portable traffic systems that purport to scan the airspace to see traffic that the pilot might not. These have become ever more sophisticated and although no one claims theyll go toe-to-toe with TCAS system, buyers find that portables have merit.

The latest comes from Zaon Flight Systems and its called the XRX. Its the first portable unit that takes a stab at both the accurate ranging and azimuth display that has heretofore been limited to expensive panel-mounted gear. Although Zaon is itself a new company, the product line is actually an evolution of the SureCheck Trafficscope gadgets, which we reported on in the April 2004 issue and again in the February 2005 issue. Zaon is a split-off from SureCheck, which continues to sell its line of paper checklist products.

We tried the XRX in a series of airborne tests and found that its performance is generally good, although short of perfect for reasons well illuminate. We expect that when this device is used with external antennas-these werent available for our trials-it will be quite capable, especially considering its $1795 price tag.

Rock of Gibraltar
What immediately distinguishes the XRX from previous models, both the SureCheck brand and those from Monroy and ProxAlert-is the size and shape of the thing. The XRX-which Zaon generically calls a PCAS or portable collision avoidance system-is housed in a glareshield-mounted plastic box that measures 3.9 by 3.6 by 2.7 inches. Much of the devices volume is consumed by an antenna on top of the box, which has the shape of a truncated pyramid.

Although this antenna is quite prominent, we didnt find it particularly intrusive during our test flights in a Tomahawk. In some airplanes, however, it may be a tight squeeze between the top of the antenna and the windshield. In order to sense accurately, Zaon says the XRX must be firmly mounted so its level on the glareshield in flight.

The XRX has a small LCD screen capable of displaying a primary target and two secondary targets, with azimuth references and range for all targets. Controlwise, its simple, with only five keys: a power button, an audio mute button, range toggle buttons and a menu button.

The rear of the chassis contains power jacks-10 to 48 volts, ships power only-audio output for aural traffic annunciation and, behind a small hatch, dip switches for configuring the audio and RS-232 options. It weighs 8.2 ounces and has a rugged carrying case and an excellent, detailed manual explaining operation. It also has Velcro mounting accessories and audio interface cables.

The XRX operating theory is similar to previous SureCheck products in the sense that its a passive device, listening for other transponders replying to interrogations by ATCs secondary radar. The XRX claims to advance portable collision technology by also providing better range and, for the first time, azimuth information on detected targets. The XRX points in the direction of the detecting target, identifying a quadrant in which the pilot can then look, reducing wasted scanning time looking where the target isnt. It has both a built-in solid-state altimeter and compass that allow it to calculate estimated bearing to the target and relative altitude, plus trend information on whether the detected target is climbing or descending.

Range and relative altitude are nothing new to portable traffic technology, although weve found accurate ranging to be iffy among all the portables. Depending on the direction of approaching traffic, this turned out to be true of the XRX as well. To determine bearing, the XRX has four small antennas inside its housing connected to four individual receivers, a design Zaon says allows the XRX to “hear” which direction the traffic is approaching from. It determines range by slant distance calculation based on relative signal amplitude, a method limited by the fact that transponder power output isnt a constant, thus its difficult to distinguish a powerful transponder at great distance from one of lesser power closer to the receiving antenna.

Installation, Setup
The XRX is shipped with a complete installation guide and can be used strictly in portable mode with no headset for audio, a headset plugged directly into the back of the box or a hard wire for both audio and power. Zaon recommends installing the unit on the glareshield at least six inches away from any metallic structure or the airplanes compass, something that proved easy in the Tomahawk. Avoiding nearby metal is important to avoid multi-path reception errors that could confuse bearing calculations, says the XRX manual.

The XRX has to be mounted nearly level so Zaon provides silicone feet of various sizes to wedge the thing properly. Both power and audio cables are provided; the audio cable is a splitter that plugs into ships audio and splits out a headset jack. There are provisions to hard-wire directly into the audio panel, to reduce the wiring hassle, which is minimal to begin with. The XRXs internal compass is factory calibrated but can also be field adjusted.

Using the range keys, detection range can be set at 6, 3 or 1.5 miles, while altitude range can be set for +/- 2500, 1500 or 500 feet. The graphic shows how the display logic works. There are two screens-A and B-the former shows up to three targets simultaneously with numerical information on range, quadrant and altitude. Screen B depicts one primary target represented numerically on the left side of the display and a graphical 360-degree representation on the right side, with up to three targets depicted.

Along the lower edge of the screen, the XRX displays “local” heading and altitude, which are data points taken from the devices onboard compass and pressure altimeter. If wired into the ships audio, the XRX issues traffic alerts aurally, beginning with a voice advisory and beeps at .6 to 2 miles, escalating to a warning and four beeps at .3 to .7 miles.

Flying It
We conducted two mutual target trials of the XRX, using an Archer equipped with Skywatch and a Mooney equipped with TIS, to verify range and bearing results. Further, Tomahawk owner David Ansley, who bought the XRX for his own use, flew an additional 25 hours of cross country time. We found that the XRX performed best when set to a 6-mile range and +/- 1500 feet.

Generally, consistent range sensitivity was the XRXs weakest trait. Range accuracy turned out to be excellent for closing targets in front of the airplane, from about 9 oclock to 3 oclock. Using data from the Skywatch, TIS and comparative GPS readings, these ranges were reliably within tenths of a mile. Very impressive and the best performance weve seen from a portable.

However, when our target airplanes transitioned behind the 9 oclock or 3 oclock position or approached from behind the airplane, the XRX had more trouble either holding or acquiring the target data. We could rarely get it to see a target approaching from the rear quadrants and when it did acquire these, the range was often overestimated by more than twice. However, once within the forward quadrants, range became ever more accurate. When detected, azimuth to targets seemed accurate.

Falsing is not an issue with the XRX, as far as we can tell. We werent troubled by targets that werent there. However, this also means that the XRX will occasionally suppress targets youd like to see. Two interrogations are required before the XRX will decode and display transponder information. This takes 10 to 16 seconds if only one radar is interrogating the target aircraft. The time is much shorter if a TCAS aircraft is interrogating the target aircraft, however.

Because the XRX knows to suppress the transponder of the airplane its in (to prevent saturation) the target must be received twice, otherwise its rejected as false. In our 25-hour cross country flight, we noticed that the XRX occasionally failed to display aircraft, including airliners, or they displayed only briefly. Our test of other portable traffic devices, including the XRXs predecessor units, revealed similar performance, thus we think its probably a limitation of this class of equipment.

We found the XRXs display to be logically designed and easy to interpret. However, its also small and difficult to read at times, unless its in direct sunlight. We think it could be improved by being larger and with more contrast. The XRXs aural alerts are excellent and definitely worth having. One thing we noticed is that the XRX gets quite warm and will automatically shut down at internal temperatures above 149 degrees F. But the display remains active during shutdown. We think it should indicate an error message to flag the temperature alarm.

Conclusion
Were impressed with the XRX and we think its the most capable portable traffic device weve seen yet. Its performance was generally good, albeit not impressive for targets approaching from the rear.

From the front quadrants, range and azimuth accuracy was excellent. For the time being, well reserve final judgment until were able to test this device with an external antenna. Based on our conversations with True Flight, our view is that the XRXs reception and detection sophistication would benefit from external antennas. If thats true, the system would represent a reasonably effective traffic device for under $3000, including the antennas. Further, Zaon says its working on a low cost panel-mount design, which well examine when it becomes available.

-David Ansley and Larry Calder assisted with this report.