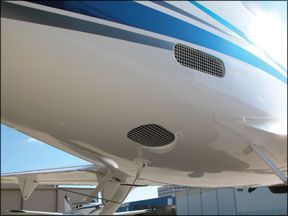 A few minutes of roasting in the summer sun on a hot ramp will leave most any pilot wishing for air conditioning. Unfortunately, three problems stand in the way: weight, power and cost. Light aircraft AC systems have been around for some time, but recent advances in technology are making the project more reasonable.

You can add AC to almost any aircraft you want via several STCs or by field approval. Expect to lose between 40 and 90 pounds of useful load and send the aircraft to the shop for north of 100 hours. But it will give a new meaning to being cool on the ramp.

Step One: Pick a System

The trouble with AC is that compressing the refrigerant takes serious power, either directly from the engine via a driveshaft and clutch or via an electrically-powered compressor. The engine-driven option is usually used for small aircraft. They work passably on the ground at a high idle, but dont really pack a punch until the aircraft is flying and the engine is turning faster. The compressor must fit somewhere under the cowl but you dont need a high-output alternator.

Electrically-driven systems have the advantage that the compressor can be put anywhere (the tailcone is popular) and they can be run on the ground by GPU before you even start the engine. On the taxi and waiting for takeoff, youll need enough RPM to energize the alternator, usually at least 1300 RPM. Youll also need a 100-amp alternator, in most cases. Make it two alternators for systems that cool bigger cabins. Thats because the AC will draw between 40 and 100 amps all by itself, depending on the system and the size of the area its designed to cool.

The industry leader in terms of STCs for GA aircraft is Keith Products, with over 80 STCs. Many of these are for biz jets, but they have STCd systems for even the Cessna 172. Keith also offers conversion kits for older R-12 (Freon) systems to make them work with the somewhat more environmentally-friendly R-134a.

That labor includes cutting two holes in the fuselage for air flown over the condenser. These holes are covered with mesh and usually have small air deflectors at the leading edge-no big, drop-down scoops used on old Piper systems.

Installation on twins and turboprop singles makes an electrically-driven system possible. For a Cessna 310 its a 12,000-BTU system that weighs 80 pounds and requires 65 amps of current flow. Itll hit you for $15,915 and take 100 hours to

Keith doesnt do the installations. Youd have your shop contact them for a kit and a labor quote. They do support field approval efforts for non-STC models, but these are becoming more difficult to get.

Aircenter, Inc. in Chattanooga, Tenn. isnt afraid of field approvals. The company has STC installations of its electrically-driven Cool Air system (manufactured by Envirosystems) for Barons, piston-powered Twin Commanders and Cessna 310s. But they have used field approvals to put the system into Aztecs, Cessna 401s, Bonanzas and more.

The kit costs $19,100 and labor varies with the installation. Aircenter will quote a $7000 flat rate for labor if they do the installation at their facility. Regardless of where the install is done, Aircenters price includes DER support and help getting the flight manual supplement approved-a big sticky point on field approvals.

The rookie in this field is Kelly Aerospace and their Thermocool system. This electrically-driven system was developed by Northcoast Technologies, which was purchased by Kelly. The compressor is a DC brushless system that only draws 33 amps (45 for a max cooling on a heat-soaked aircraft).

The system is rated for 14,000 BTUs and weights about 55 pounds. Neat features include a digital climate control and a switch outside the pilots door to turn the system on while connected to a GPU. They require a 100-amp alternator, or second alternator.

The system is only STCd for certain Cessna 172s and 182s and takes about 80 hours to install. They are planning STCs for the 206, PA-32s, Bonanza, Mooney, and Cirrus. The cost is yet to be determined

There are some other STCs out there, but most are for bigger aircraft and use older AC technology. Helicopter owners should also check out Air Comm Corporation for helicopter systems and STCs.

Theres no free lunch, so the energy directed to cooling the cabin will come out of your overall performance. Even the lowest-draw electrically-driven systems will shave two or three horsepower from your motor. The drag penalty for the cooling vents in the belly varies. One 182 installations operating manual shows two percent reduction in cruise. It also shows a five percent increase in takeoff and a 50 fpm reduction in climb, if the system is running during takeoff. Many systems also move the c.g. slightly aft. The bottom line is to get all the numbers as they will affect your aircraft before you put your money down.

On the plus side, you will get a fan-only mode to better circulate cabin air when you dont need AC. And on those sweltering days when youre number three for takeoff, you can sit in quiet, cool comfort while everyone around you is fanning their aircraft doors to try to get a bit of relief in the cockpit.