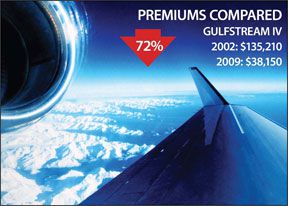 The good news about aircraft insurance is that for most owners, insurance has never been more affordable or more available. The bad news is that most people in the business think that the pendulum is about to swing back the other way.

What got us here? Ironically, the 911 attacks had something to do with it as does the current economic malaise. Demand is slack, there are more providers than ever and companies are willing to deal. But, as always, it wont last.

A Bad Year, A Good Year

Following the 9/11 attacks, insurance rates for most aircraft increased dramatically. The amount of the increases depended upon the market segment, with many big iron operators seeing their rates double overnight.

Most light aircraft owners saw less of an impact, but as a result, 2002 and 2003 were some of the most profitable years for the industry in recent history.

This profitability did not go unnoticed by the MBAs talking to the corner office. A number of companies, seeing dollar signs, jumped into the market. “Jump” may be a little misleading. Starting an insurance company is a bit like erecting an office building: It takes two to three years or more in most cases.

Insurance is regulated by the states and insurers need to have their policy forms approved by every state insurance department where they do business. They also have to find sources of capital, hire experienced people and recruit brokers to their cause.

In 2002, depending on how you count, there were nine aircraft insurers. By the beginning of 2006, that number had risen to 16. You read that right-they nearly doubled.

As the hungry new entrants came on line, the existing carriers were forced to lower their pricing or lose business to the new guys. Long the darling of underwriters, corporate heavy metal operators reaped much of the benefit. Premiums for many of these operators are now 25 percent of what they were in 2002. One quarter. Gradually, the competition expanded to include light airplanes and some helicopters, although the reductions here were not all quite as dramatic.

The insurance business is a cyclical one, rising and falling from so-called “hard markets” to a soft market. Some of the ups and the downs are caused by sweeping trends in reinsurance, which are often driven by large, non-aviation catastrophes like hurricanes. These swings are also related to the business cycle.

Most soft insurance markets occur in times of economic

expansion when interest rates are fairly high and insurers can earn interest income by investing premiums before they have to be handed over to pay claims. In this kind of environment, insurers can literally sustain loss ratios of over 100 percent and still make money because of the interest income.

Ironically, the one factor that doesnt usually drive light aircraft insurance rates is light aircraft accident rates. Accident rates move within a narrow range and dont individually have the impact of a hurricane or a wide body airliner with 300 people in back. The current soft market is different in that it has lasted well into the deepest financial recession in decades. In the current environment, investment opportunities are limited. So why are rates still low?

In part, aircraft insurers dont want to lose customers to competitors, even if holding on to them means reducing rates below the break-even point. In addition to the usual market pressures, it seems as if insurers are afraid of driving their clients out of the airplane business entirely, as if by offering lower premiums and more relaxed underwriting requirements, they can encourage owners not to sell their airplanes.

Perhaps a vain hope. A cursory scan through an aircraft dealers data service recently revealed that almost one quarter of all the Gulfstream IVs ever built are listed for sale. Things are not as dire for light airplanes, but values have taken a pasting; its definitely a buyers market.

Meanwhile, aviation accidents and claims have continued at about their usual rate. Repairs and replacements and lawsuits cost about the same amount as they did last year. With premiums down and claims holding about steady, there are signs that things might be changing. One of the canaries in the coal mine of general aviation insurance is the airline insurance industry. And airline rates have begun slowly, in fits and starts, to increase. In many cases, airlines are retiring airplanes faster than insurance rates have been rising, so actual premiums have not been increasing until quite recently.

Even now, most premium increases have been reserved for airlines with significant loss experience. But most people in the airline business agree that rates are going to have to go up in order to pay ongoing claims; its just a question of how much and how quickly.

There are also signs that not all of the current general aviation carriers will remain standing. Travelers recently announced that its fairly new domestic aviation unit would cease underwriting new policies as of December 31, 2009. Britt-Paulk Aviation has been telling brokers that its looking for a new insurer, after AXA Corporate Solutions withdrew as the capital provider for its general aviation program. There could be others who decide to take their money elsewhere.

If the amount of risk-taking capital continues to dwindle as companies drop out, and particularly if the economy doesnt come back quickly, rates could go up rapidly. If all of the carriers in the GA market remain, and if the economy improves dramatically, the change will be less abrupt.

Based on conversations with brokers and underwriters, we think that the market will turn within the next year, but we didnt hear a consensus about when or how much. For the most part, the owners who have seen the greatest reductions during the past four years will probably see the greatest increases when the pendulum begins to swing the other way. Those who havent seen much change as the market declined probably wont see much increase as it heads back up.

Either way, its a good time to buy insurance, with bargain premiums for coverage limits that might not have been affordable in 2004.