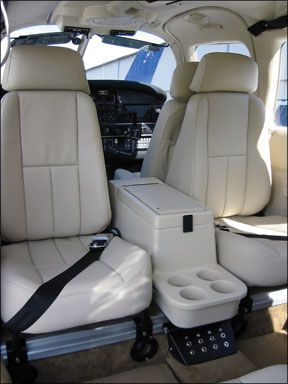 Taken in order of expense, airframe upgrades rank like this: engine overhauls, paint jobs and interiors. Of the three, only interiors yields to the do-it-yourselfer owner who’s willing to tackle a job that turns out to be easier than it may appear.

For 60 years, AirTex, a Pennsylvania-based company specializing in custom interiors, has mined the vein of owners willing to tackle an interior on their own. Our interior shop customer surveys have consistently revealed owner satisfaction with AirTex products, but very few complaints.

Also, some questions: What’s the quality like and can an all-thumbs owner really install what AirTex makes? To find out, we recently trekked to AirTex’s Fallsington, Pennsylvania factory to have a look.

AirTex is one of a few dozen vendors in the industry who have been at it seemingly forever. The company traces its history back to 1949, when founder Al Stretch migrated from the famed Irvin Air Chute Company to begin manufacturing pre-sewn fabric wing and fuselage envelopes for the post-war light aircraft industry, which was booming. By the mid-1950s, as that business gave way to more metal-covered aircraft, Stretch expanded the business to begin manufacturing custom interiors for the do-it-yourself trade, which turned out to be fairly sizeable.

Stretch passed the business on to his son Don and when Don was killed in an aircraft accident in 2001, son Dodd Stretch assumed control. Now into its third generation, the company continues to provide a unique product: complete interiors and accessories intended for installation by the owner.

Fortunately, under FAR Part 43 Appendix A, owners have wide latitude in removing, repairing and re-installing aircraft interiors, as long as no structural work is involved. In inspecting the kits and materials provided, we would estimate that recovering the seats is the most involved part of the process, followed by sidepanel installation and carpeting. 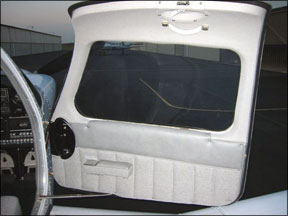 Dodd Stretch walked us through some of the typical products provided by AirTex. (See the Web site for a complete listing.) In touring the factory, we noticed racks of patterns for every aircraft imaginable, some of which aren’t on the Web site. If you don’t see your aircraft listed, query AirTex.

Speaking of patterns, Stretch told us the entire business is based on a vast library of patterns developed over the years. These consist of shapes drawn on craft paper placed directly on the fabric for cutting. Each aircraft model has dozens of patterns for seat parts and backs, side panels, carpet and baggage compartment liners. Interestingly, although most of us tend to think of things like carpets being a single piece, some are actually composed of more than a dozen, hence the need for accurate patterns.

Seats set, carpets and side panels can each be purchased la carte or as an entire set. Either way, they are likely to be manufactured and shipped separately. The chart above shows some sample prices, mostly for four-seat aircraft. Step one is to select fabrics, which you can do on the Web site or by having AirTex send fabric samples. If you’re picky, we recommend getting the samples. Handling the material gives a better sense of color and texture. AirTex offers a range of fabrics and colors that are a step above the mid-1970s to 1980s OEM materials they are replacing. Interiors in those days were heavy on vinyl in colors whose exact formulations have been mercifully lost to time.

Although it’s not strictly a custom house, AirTex will work with customer-supplied material, including leather, as long as it meets the burn requirements described on FAR 23.853 and explained on page 18.

Dodd Stretch showed us how AirTex builds up its seats. Older aircraft typically had a single piece of molded or cut foam for the back and lower seat. Some aircraft use simple slings or webbing to support thinner foam pads. Original equipment from the 1970s is heavy on glued vinyl and has minimal stitching. AirTex upholstery, on the other hand, is almost entirely stitched and often with double seams covered by piping that protects the seam against wear and premature unraveling.

What buyers get in an AirTex kit—at least for some aircraft—is a new foam underseat structure built up of multiple foam segments glued into a whole. (See photo on page 15.) This provides a more durable shaped seat that’s also more comfortable. The upholstery itself is made of a preassembled envelope that pulls down over and/or around the foam, once it’s attached to the seat frame. “For the bottom of the seat,” Stretch told us, “everything is glued together as a unit. For the backrest, the foam and the upholstery are separate pieces.”

If this sounds difficult to piece together, customers apparently don’t have much trouble with it. “We don’t send instructions with anything we offer,” Stretch told us. “We’ve always just given support and instructions over the phone. This isn’t exactly rocket science. A lot of people really seem to enjoy the process,” he adds.

Although the seats appear to be the most difficult task, the headliner is actually more daunting, says Stretch, or so it would appear. The reality is that even amateurs can tackle the headliner if they take their time and approach the task logically. Stretch says AirTex will stay on the phone with a customer for as long as it takes to get the job completed.

Using its library of patterns, AirTex can provide complete carpet sets for most aircraft. These are usually multiple pieces so they can fit around seat rails, consoles, rudder pedals and ducting. These either glue to the floor or attach with Velcro, so they can be removed for cleaning and maintenance.

No one would mistake the side panels in older aircraft as the industry’s finest construction example. Many were cheaply made of carpet or fabric glued to fiberboard. The inevitable cabin leaks stain and degrade this stuff to the point of uselessness. The musty smell that old interiors have often comes from water-degraded or moldy side panels.

AirTex’s improvement is a stiffer, corrugated polyethylene board that’s stronger and waterproof. AirTex covers this with fabric sandwiched with a thin layer of foam. The board holds the stitching, obviating the need for glue, which eventually deteriorates.

Our customer surveys of interior shops have always placed AirTex in the top tier. Complaints have been few and usually related to frustration with installation. As noted, for those who don’t want to do the work themselves, AirTex maintains an installation shop at Trenton-Mercer Airport in New Jersey. Dodd Stretch told us typical complete jobs invoice between $7500 and $8000 for a four-place single.

As noted in the chart above, prices of complete kits are typically in the $2500 range, although some aircraft cost more. AirTex imposes a modest upcharge for use of customer-supplied materials. Check with the company to get a price quote.