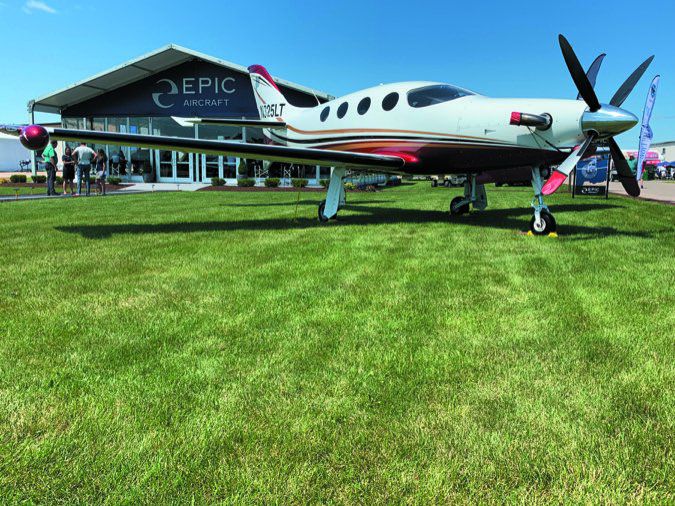 Another AirVenture at Oshkish is in the tailpipe and keeping with tradition, it’s time for our show diary highlighting stuff that caught our eye, and products we’re watching moving forward. First, some stats on a record-breaking year-which happened to be show number 50 there at Oshkosh.

At approximately 642,000, attendance was up 6.8 percent from 2018’s record total. There were 16,807 aircraft operations at AirVenture’s Wittman Airport, and plenty of others at surrounding airports.

The vendors we talked with seemed happy (especially the ones selling avionics), and there were a total of 863 of them this year. Why so happy? Perhaps it’s because many were reporting that customers seem willing to spend money-a change from previous years.

BendixKing is banking on customers spending money on several products that after years in development finally have FAA approval.

The first one is the KI300 retrofit EFIS, also known as the AeroFlight. What buyers might really care about the KI300 is that it’s an approved replacement for the aging and maintenance-intensive King KI256/255 vacuum-driven autopilot gyro. This instrument is an integral component in a variety of King KFC-series autopilots because it provides pitch and roll reference to the autopilot.

Priced at $5330, the KI300 has a backup battery for powering the display for up to one hour, has speed and altitude tapes (which can be turned off) and can be installed as the primary (or backup) attitude indicator as long as the airspeed and altimeter indicators are retained. The initial STC includes the Piper PA46 series, but the company said a wide variety of approvals will follow within weeks. I found the instrument to have a decent display, plus it has a stone-simple feature set.

The company also showed up with an STC for the KFC230 AeroCruze autopilot it previously announced. This is designed as a drop-in replacement for the KFC/KAP 150-, 200- and 225-series analog autopilots. Priced at around $10,000, the AeroCruze uses most of the existing autopilot wiring (the mounting tray needs to be changed) as well as the existing autopilot servos. The KFC230 has a color touchscreen feature set, which has a screen layout that can be custom configured. BendixKing is also covering the existing autopilot servos with a two-year warranty after the installing dealer confirms that they work correctly. That could really work in the buyer’s favor as these servos can be expensive to repair-and the aging models can and will fail, based on my experience.

Last, the AeroVue Touch retrofit EFIS system that BendixKing was showing for experimental aircraft at last year’s AirVenture now has an STC for hundreds of certified aircraft. Priced at $14,995, the system has a near 4K display resolution and comes standard with Honeywell’s synthetic vision, electronics charting provided by Seattle Avionics and a wireless Bluetooth interface. The AeroVue Touch is compatible with third-party avionics including Garmin and Avidyne GPS navigators and can display a variety of traffic and weather sensors.

But the real surprise from BendixKing is that its parent, Honeywell, purchased autopilot manufacturer TruTrak Flight Systems-an innovator in experimental-class autopilots that recently added applications in the certified world.

TruTrak’s current leader, Andrew Barker, will continue in his role under the new ownership, and BendixKing will absorb at least some of TruTrak’s engineering staff. BendixKing has a recent history of renaming and selling third-party equipment (including Avidyne navigators and JP Instruments engine monitors). We’ll take a closer look at the BendixKing product line in an upcoming article in Aviation Consumer.

The uAvionix booths at AirVenture were packed layers deep with last-minute ADS-B buyers as the 2020 mandate was 23 weeks away. But high on the list of ADS-B equipage concerns is the developing ADS-B space-based Aireon tech in Canada (and the U.S. aircraft that will fly there), which looks to require diversity systems, or those with dual antennas. The effort to install that second antenna could easily blow a “budget” upgrade for simpler aircraft-a market that uAvionix has essentially taken over with its skyBeacon and tailBeacon products. So with a clever but obvious tech redesign, uAvionix is testing a second blade antenna on the current single-antenna style skyBeacon design.

Like the original skyBeacon, the skyBeacon X is an LED position light replacement, but has an integrated 1090ES transponder (and WAAS GPS), plus a baro altimeter. The company says it might be ready in 2021, and it hasn’t mentioned pricing, but uAvionix President Christian Ramsey hinted it will be budget-based. “We specifically designed the skyBeacon and tailBeacon to target a low cost of installation, and we are doing it again with the skyBeacon X,” he said in a news release.

uAvionix reiterated that back in January 2019, Nav Canada announced it will be implementing ADS-B airspace performance requirements in three phases. Phase 3, to be implemented no sooner than 2023, is the biggest impact on GA operations and will require ADS-B Out systems with two antennas-one on the top and the other on the bottom-of the aircraft. Don’t overthink the tech: Since Aireon is satellite based, an antenna on the bottom of the aircraft won’t do much for performance, or specifically, the aircraft’s ADS-B Out data update rate.

The skyBeacon X testing, so far, shows that the new design can work well out on the wingtip for both ground and satellite signals.

Years in development, the Epic E1000 turboprop single could finally be close to certification, the company said in a press conference at AirVenture. Doug King, Epic’s CEO, told reporters that the company had completed all of its internal flight testing leading up to certification and has received its type inspection authorization. That means the Epic has passed the last hurdle before the FAA begins its flight-test review.

Certification is Expected in 2020.

Production will begin shortly after the type certificate and production certificates are approved; the PC is being sought in tandem with the TC. King says that the first three customer aircraft are already under construction in Bend, Oregon. The 300,000-square-foot facility will build one aircraft a month to start but is designed to build as many as one a week. Including a full Garmin avionics suite the 333-knot Epic carries 1100 pounds and costs $3.25 million.

While on the subject of turboprops, Textron was showing off a full-scale cabin and cockpit mock-up of the Denali turboprop single it announced in 2016. The company said it plans to enter flight testing with the prototype by the end of 2019.

The 1300-SHP Catalyst FADEC engine will be provided by GE Aviation, is being developed specifically for the Denali and will spin a digitally controlled McCauley five-blade composite propeller. The engine is slated to have a 4000-hour TBO, but a 5000-hour TBO is the ultimate goal. The Denali is expected to have a 1600-mile range and typical fuel burn of 60 GPH, while the single-pilot aircraft will have a service ceiling of 31,000 feet. The aircraft will have a digital pressurization system that maintains a 6000-foot cabin at 30,000 feet.

A Drop-In Continental for Skyhawks

Continental announced a new STC to install its Prime IO-370-D3A3 engine into Cessna R- and S-series C172s-a retrofit that could actually cost less than overhauling the Lycoming IO-360 it replaces.

The Prime IO-370-D3A3 delivers 180 HP, includes roller tappets and comes with a recommended TBO of 2200 hours that extends to 2400 hours for high-utilization aircraft. The STC includes the engine, a Bendix impulse coupled ignition system (to provide improved starting and reduced magneto maintenance, Continental says), a starter, fuel system and associated STC paperwork to complete the installation on Cessna 172s currently using a Lycoming IO-360-L2A engine. The STC is priced at $27,226 and comes with a two-year warranty.

Four years from now, sport airplanes with four seats might just be a thing, according to Dan Johnson of the Light Aircraft Manufacturers Association. In a press briefing, Johnson said the FAA has adopted a formula called a power index that factors in horsepower, wing loading and total vehicle weight. As long as the aircraft fits within the power index confines, there’s no specific limit, Johnson said. “But they can definitely be larger because what they’re adding into this now, that no one expected, is up to four seats,” he added. The overarching goal is to keep wing loading and stall speeds low as a safety enhancer. “Obviously, if you have a number that’s way up there beyond 3000 pounds, which is way beyond the current number-that’s going to require that aircraft have a substantial wing and enough horsepower so it can keep the stall speeds way down low and be easy to operate,” Johnson said.

Lycoming debuted a new electronic ignition meant to be a bolt-on replacement for conventional magnetos. Dubbed the Electronic Ignition System (EIS), the devices have no internal moving parts and slip right into conventional magneto housings on four-cylinder Lycoming engines.

The company is working toward FAA certification for retrofits, so it’s still only fair game for experimentals. One exception is the CarbonCub XCub, which debuted this system with its CC393i. Also, six-cylinder versions are in development.

For certified aircraft, the EIS initially will be configured for fixed timing, like a magneto. The initial approvals are expected in the third quarter of this year, with Lycoming continuing development of a variable-advance version in early 2020. No pricing has been set, but Lycoming said it will be competitive.