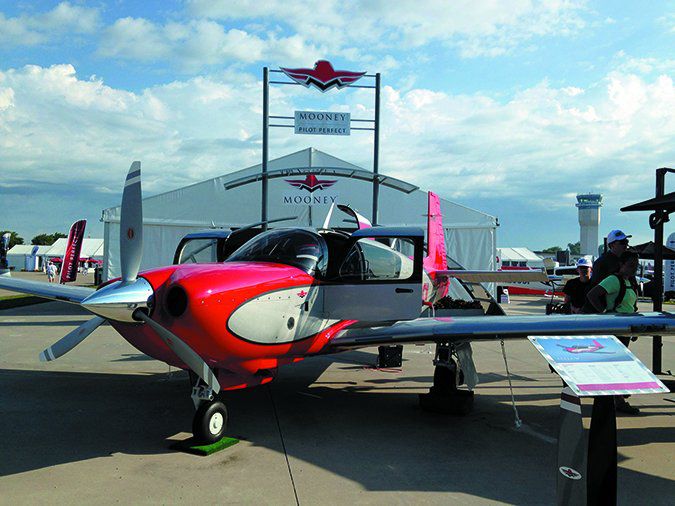 It’s hard not to pass judgment on the health of the industry by what companies unveil at AirVenture. Still, as we’ve witnessed before, major manufacturers may show up with more new product announcements than we can cover in a week, but that doesn’t mean the industry is rolling along fat, dumb and happy. This year, vendors did seem happy, and while many weren’t fat with record sales, everyone seemed to agree that the show simply had a positive vibe, perhaps signaling the stability we’ve been looking for in previous years.

After attending the daily media briefings, walking the show and speaking with manufacturers and showgoers, herewith is our annual AirVenture diary of the standouts.

You don’t have to be at the show for long to recognize the superstar product in the avionics market. This year, it was actually a product that was already unveiled at Sun n’ Fun this past spring. Garmin’s non-certified G5 electronic flight instrument was originally intended for LSAs and experimentals, but when Dynon and the EAA shocked the industry with an AML-STC for the D10A EFIS at Sun n’ Fun, we had a serious suspicion that Garmin would bring an STC’d version of its G5 to AirVenture. And we were right. The $2500 G5 now has an AML-STC for over 500 aircraft, where it is fair game for installation as the primary and only attitude source. Unlike the version for experimental aircraft, the STC’d G5 is stripped down of its autopilot capabilities, plus it won’t display vertical nav guidance. Look for it at Garmin dealers this Fall.

Audio system manufacturer PS Engineering introduced two more audio panels to its already packed lineup of products. The $2600 PMA450A sports a new OLED display, gets a more powerful bezel-mounted USB-C charging port, plus an internal Bluetooth module called PS Streamer. This wirelessly sends audio to compatible action cams and other devices where you would want to capture the audio you’re hearing. The $2300 PMA8000G—with newly designed ergonomics—has a new checklist feature called Flightmate. It allows the pilot to record alert messages that can be triggered by some event or switch in the aircraft, like a stall warning or autopilot disconnect. The four available logic inputs trigger specific messages that are pre-recorded by the pilot. The panel also has two minutes of recording time to store checklists or other information, which can be played back at the push of a button.

On the tablet app front, the big news was the introduction of ForeFlight Mobile 8. The new version uses data-driven map technology, and specifically, a new aeronautical map layer, which dynamically draws map objects and adds and removes data depending on the map zoom level and pilot-settable preferences. It essentially mimics the mapping function found on panel MFDs and even portable GPS systems, but with a more enhanced zoom function. Look for a full report of ForeFlight 8 (which ForeFlight expects to release in late August) in the next issue of Aviation Consumer.

No, that’s not a Pilatus PC-12 pictured to the right. It’s a rendering of the Cessna Denali single-engine turboprop, the name and cabin mock-up revealed by Textron at the show. The Denali just couldn’t shake playful chiding—being called the “Cessna Pilatus”—given its close resemblance to the PC-12 turboprop single. Draw your own conclusions.

The Denali, with its first flight expected in 2018, will be powered by a new 1240 shaft horsepower-rated GE turboprop engine with a single-lever power and propeller control. Garmin will provide the G3000 touchscreen avionics suite and McCauley will supply a new 105-inch diameter composite 5-blade propeller. The plane can accommodate up to nine seats in the main cabin—which is 63 inches wide and 58 inches tall—the largest in class, according to Textron. Range is being advertised as 1600 NM, with one pilot and four passengers aboard and at a high-speed cruise of 280 knots. Full fuel payload is being pegged at 1100 pounds.

Stemme used AirVenture to finally unveil its Twin Voyager S12 touring motorglider. Previously seen in photos and videos, the S12 has a glide ratio of 53:1, a 140 knot cruise speed and a 950 NM range. Priced at around $370,000, we met a couple of buyers at the show who were anticipating delivery of the niche aircraft.

Yingling Aviation’s Ascend refurbished 172 was on display at Garmin’s tent and featured a new glass panel, including a G500 EFIS, touchscreen navigator and ADS-B system. But what seemed to attract the most attention was the aircraft’s new tri-color paint scheme. The Ascend is AOPA’s current sweepstakes airplane.

If there weren’t enough King Air refurb programs, Innova Aerospace has two more for the King Air 90. The Innova upgrade ditches the old engines in favor of new GE H80s, which the company said brings a significant reduction in operating costs. Interestingly, one Innova King Air 90 on display at the show was fitted not with a Garmin G1000, but with BendixKing’s AeroView integrated glass avionics suite, which is part of the STC process. Worth noting is that BendixKing hasn’t yet earned certification for the AeroView, which it is flying in its own King Air 200.

In the “cool airplane” department was Murphy Aircraft’s Radical, which has racks for hanging bicycles from each wing. The Radical is the Canadian kitbuilder’s first stab at offering a ready-to-fly aircraft, but will also be available as an unassembled kit, a 49-percent quick-build kit or built by Murphy under Canadian builder-assist regulations.

Rotax held a press conference to update the media on its 915iS Sport next-generation engine, which is on track for 2017 deliveries, although the company didn’t say which airplanes would carry the engine. The 915iS—which is based on the 912iS Sport platform—produces 135 HP at altitudes up to 15,000 feet and has a service ceiling of 23,000 feet. With the turbocharger installed, the engine weighs only 185 pounds and will have a 2000-hour TBO. Rotax says the 915iS has already undergone well over 100 hours of flight testing and over 7000 hours of bench testing.

The first customer delivery of Piper’s M600 turboprop wasn’t the only big news from Piper. It also announced that the Archer will get a fuel injected engine. With plans to certify the aircraft with Lycoming’s IO-360-B4M, Piper said the new model—called the Archer TX—will be an attractive choice for flight schools and operators in severe climates. Fittingly, the first TX will go to the flight department at the University of North Dakota. Piper plans to offer three models, including the plain-vanilla carbureted model, the Continental diesel-equiped DX and the new injected TX.

Airbus brought to the show its hybrid E-Fan Plus twin-engine aircraft. With more endurance than the company’s all-electric model, the E-Fan Plus has a thermal engine manufactured by Solo from Germany. What’s unique about the E-Fan Plus is its ability to operate in three modes: on electric power (via lithium-ion batteries), with the thermal engine acting as a range-extender by charging the batteries along the way or by electric power alone. Extended-range endurance is said to be just over two hours.

On the training and safety front, the Vision Jet wasn’t the only buzz coming from the packed Cirrus tent. The company won AOPA’s Air Safety Institute’s Joseph T. Nail’s annual safety award. “Over the past decade, Cirrus has earned one of the best safety records in the industry. It has doubled down on safety, working with its owners group and making investments in training and transition courses, to lower the accident rate for Cirrus aircraft to less than half the industry average,” said ASI’s George Perry. Worth mentioning is in 2015, the number of fatal accidents involving Cirrus airplanes fell to the lowest level since 2001, when fewer than 300 Cirrus aircraft had been produced. There were over 6000 flying in 2015.

In addition to showing off its flagship XCub (it sold 20 copies of the new model, which was recently announced early this summer), CubCrafters introduced a new factory training program aimed at easing transitions to all of its models. The transition program will be led by Oregon-based TacAero, which purchased every model in the Cubcrafters lineup. “Many of our customers that come to us are flying Baron and Bonanza models, as an example, and they need to get comfortable flying a tailwheel aircraft. Preferably, our tailwheel airplane,” CubCrafters’ John Whitish told us.

TacAero’s five-day certified transition course was developed with Cubcrafters. The course, which is conducted in Hood River, Oregon, is $6500 and is all-inclusive, including lodging. The robust program includes 20 hours of ground training and 18 hours of flight training. TacAero also offers survival courses.