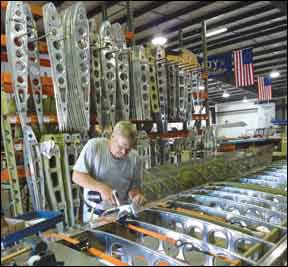 For as bad as the aviation boom-bust cycle is for companies that make airplanes, it’s just as bad for the people who buy them. The euphoria that goes with pocketing the keys to a brand new airplane has to be tempered by the reality that the company that built it maybe teetering toward bankruptcy.

Is there a better business plan, one that envisions modest production and flexible size and that can survive the test of the worst economic downturns? There are at least a couple of examples that suggest this can work. The family-owned Maule Air is one, shipping 30 or 40 airplanes a year to Cessna’s 500, but lately a lot less. American Champion, which counts as the most enduring rag-and-tube manufacturer, is another, building as many as 90 airplanes a year but as few as a third of that number.

And despite the worst downturn in 30 years, American Champion keeps the lights on, producing what are essentially modernized, improved versions of airplanes that trace their roots back to the Aeronca Champ, a contemporary of the famed Piper Cub. Although these designs may seem like throwbacks, they hold down a niche in a weak market dominated by newer metal designs from Cessna and composites from Cirrus and Diamond. To slide into a cockpit of a Champion Aircraft, with some glass in the panel, is not so different from being in a Cessna or a Diamond.

How does Champion do it? With intense vertical integration, careful cost control, realistic marketing expectations and, as we learned on a recent visit, sheer determination to stay in the business.

Long History
What is now American Champion, which calls a former farm in Rochester, Wisconsin, its home, dates to the late 1920s, when the first C-model Aeronca appeared. The company really took off after World War II when the popular 7AC Champion rolled out, eventually finding more than 7000 buyers.

The inevitable downturns, the first in 1954, halted production and the company went through various owners. In 1954, Robert Brown acquired the original Aeronca and renamed it Champion Aircraft Corp. It began production of the 7EC. New models came out of that period, including the Citabria aerobatic airplanes and even a twin called the Lancer.

In 1969, Champion was again sold, this time to Bellanca, which developed the Decathlon, but suffered a factory fire and the sold the assets again. By the early 1980s, the company reestablished in Tomball, Texas, but that operation went south, too. By the end of that decade, although aircraft sales were still anemic, the current company owner, Jerry Mehlhaff Sr. sensed an opportunity. Mehlhaff had been a Piper and Mooney dealer sold Bellanca for awhile.

He knew aircraft sales and thought he could make a business of building and selling improved ragwing taildraggers. He bought the company, lock, stock and 16-trailer loads of jigs, tools, materials and type certificates. In 1988, he moved the operation to a farm in Rochester, Wisconsin, 20 miles southwest of Milwaukee.

For a small company, American Champion has an almost bewildering array of models and options. In all, there are eight basic models, only two of which share the same engine. When we visited the company in August of 2011, it was just shipping a new model, the Denali Scout, equipped with Lycoming’s new 210-HP IO-390.

At the opposite end of the spectrum is one of the original airplanes, the O-200-D powered 7EC Champ which, at 1320 pounds gross, qualifies as the only FAA-certified LSA still in production.

But the meat of American Champion Sales has been in the higher-priced models. The top seller has been the 8KCAB Decathlon, which finds a niche with flightschools and colleges that want an aerobatic trainer and with individual owners who aren’t ready for a Pitts or an Extra. With an AEIO-360, the Decathlon’s base price is $163,000. The Citabria Explorer ($134,900) and the Adventure, at $130,900, have also been strong sellers.

What’s most noticeable about those prices is that they overlap generously with the top tier LSA aircraft, despite being FAA certified. How does American Champion manage?

Market Philosophy
Cost control, efficiency and matching production to market realities, says Jerry Mehlhaff, who is no stranger to survival in a down market. “I rode it out with Piper for almost eight years,” he told us. “There were dealers signed up for airplanes they were never going to give away.” When he established American Champion, Mehlhaff determined never to get stuck behind a glut of inventory.

ACA sells mostly through its five dealers, but does a little factory direct selling. But it doesn’t have a lot of money tied up in completed, unsold airplanes. When a major show such as AirVenture or Sun ‘n Fun requires display airplanes, ACA supports the dealers doing the selling with their own airplanes.

It doesn’t do much high-profile advertising, says Mehlhaff, because the return just isn’t there. “We don’t spend a lot of money on advertising because we don’t have it. Our dealers do some fractional advertising,” he says. Mehlhaff hoped to inch production up to 100 or more airplanes and although sales had been trending in that direction, 2008 changed that. ACA built 94 airplanes in 2007, but only 29 in 2009.

He estimates 2011 production will be in the 30s to possibly 40 or so. It has downsized accordingly, shrinking from 90 employees down to about 40, who now work a four-day work week.

Build It All
During our factory tour, Mehlhaff showed us the company’s production philosophy in action and that’s basically to build everything in house. And we do mean everything. Mehlhaff showed us a large wall panel to which were affixed dozens of parts, everything from bellcranks, to pulleys to brackets, all made in-house.

We saw one machining center making gascolator caps, something other manufacturers would subcontract or buy on the open market. Even in Wisconsin, which is thick with automotive vendors, Mehlhaff says ACA gets better quality control and economics doing it all in-house.

The largest exception to this might be fuselage frames. These are cut, jigged and welded by ACA, but sent out to an outside vendor for powder coating, a better corrosion preventative than painting.

Modern methods are applied at every turn. ACA uses laser cutters to chop the frame tubing and MIG welding rather than gas to assemble them. (Other manufacturers do the same.) It also made a major investment in laser cutting for ribs and other parts, decreasing cost and improving repeatability.

Part of ACA’s bread and butter comes from supporting some 14,000 airframes in the field. It can provide parts for every airplane from the 7ECA forward. It also does major and minor repairs, including replacement of old wood spars with new, metal-spar wings.

The day we visited, a hail-damaged Scout had just arrived for a re-cover. Mehlhaff knew all the details of that job because he made the deal with the owner himself, which is probably something the CEO of Cessna or Cirrus can’t say.