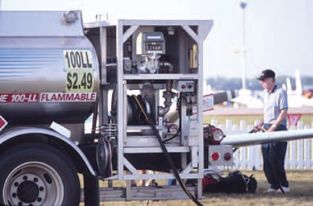 After months of back-and-forth meetings with industry players, the FAA finally seems to have settled on an unleaded avgas transition plan that foresees an 11-year timeline and a strong central role for the FAA in testing and certifying fuels. The agency is also recommending the formation of another government/industry committee to oversee how an avgas replacement fuel—if one ever emerges—finds its way to the field.

The FAA’s Unleaded Avgas Transition rulemaking committee (UAT-ARC) convened in early 2011 in response to concerns from owners and manufacturers about the lack of visible progress in finding a replacement for 100LL, which is potentially threatened by emerging air quality standards that will sharply limit lead emissions. The UAT-ARC committee was expected to issue a progress report last summer at AirVenture but, claiming budget issues, it failed to do so, nor did it follow up with any meaningful information last fall at AOPA’s Summit in Hartford, Connecticut.

Although the FAA declined to answer our questions about the ARC’s recommendations and wouldn’t say when the report will be issued, we were able to piece together the report’s highlights from sources familiar with it.

The ARC committee consisted of representatives from the FAA, the oil companies, owner groups such as AOPA and EAA, EPA and the Clean 100 user group, an owner coalition seeking a 100-octane solution for eeereplacing 100LL.

It first met in the spring of 2011 with a six-month term, which was later extended. Its charter was to devise a certification path for an unleaded replacement fuel, not to develop or even identify a replacement. The ARC’s work product was to be a report recommending an action plan. That report is now being reviewed by the Department of Transportation.

According to sources we spoke to, the FAA ARC recommends an 11-year timeline that would ultimately lead to the certification of new piston fuels, although the report itself appears not to specify octane requirements. The report incorporates close integration of ASTM International, the industry consensus organization that reviews and approves fuel standards, which the FAA has traditionally required before a new fuel can be fielded.

The report lists 16 steps or Avgas Readiness Levels through which each fuel must pass before being approved. These include such technical issues as octane values, materials compatibility, aging and other traditional fuel specs heretofore required by ASTM. Some of the ARLs—we’re not sure how many—relate to actual deployment of the approved fuels. And yes, according to sources we interviewed, there will almost certainly be more than one fuel. The ARC envisions ASTM developing at least two “gating” standards, one for traditional hydrocarbon-based fuels and a second for non-hydrocarbon fuels, such as Swift’s high-aromatic fuel. We’re told that these specs have already been developed but aren’t yet in final form.

The 11-year time span envisions development of test and certification standards that the committee recommends be done by the FAA. For this, it’s asking for significant funding—some $60 million over the period, plus another $13 million from the industry. Presumably, these funds would be used to support the FAA’s Atlantic City Hughes Technical Center, where the fuels would be qualified.

Once fuels meet an initial ASTM spec, they would be passed on to the FAA test center for further evaluation. The ARC’s charter did not include actually picking fuels, but it does recommend yet another committee called the Piston Aviation Fuels Initiative (PAFI) that would essentially act as an overseer to assure that each of the 16 ARLs are met. But it would not function to pick a single winning fuel.

Does this mean that several fuels from different sources could compete in the market? Evidently it does, according to Michael Kraft, CEO of Lycoming, who sat on the ARC committee. In a podcast recorded at Aero in Friedrichshafen, Germany, Kraft said, “It’s highly likely that you may see multiple fuels achieving the same unleaded standard. The important thing is that it’s going to be transparent to the end user,” Kraft told us.

It’s unclear if the proposed timeline means that fuel developers will have to stretch their work out over the 11-year period, but sources familiar with the ARC’s intent said they believed that’s not the case.

We were told that despite the long timeline, approved fuels may emerge much sooner than 11 years. In fact, fuels like Swift’s 100SF and GAMI’s G100UL, which have been testing extensively for some time, may enter the approvals process with many of the 16 ARL boxes ready to be checked.

If that’s true, Swift’s or GAMI’s fuel could conceivably be competing with 100LL well before any environmental pressure forces leaded fuel from the market, if it ever does. Swift told us that this is its intent.

The sources we spoke to told us the FAA’s $60 million funding request is a worst-case number, envisioning up to 10 candidate fuels. “I don’t think there will be that many. Right now, there are only two, Swift and GAMI,” one source said. However, we know of research on at least one more potential candidate being conducted by Aircraft Specialties Lubricants. This fuel hasn’t been submitted for approval yet. Nor have the oil companies revealed their potential candidates. Meanwhile, we checked on the progress of other fuel projects.

Swift has earned a preliminary ASTM spec approval (D7719) to allow it to proceed with further flight testing. Swift’s Jon Ziulkowski told us that once the ARC’s recommendations are in place, Swift will begin work on meeting a final ASTM standard.

Swift had made a deal with Embry-Riddle to conduct extensive flight testing under an STC arrangement. But that agreement has fallen through, so this summer, Swift will begin flying its fuel in Cessna 172s, also under a limited STC. Ziulkowski said Swift intentionally limited its STC application to apply to testing only and doesn’t envision distributing fuel to an STC’d aircraft population.

In May, Swift announced that even as it seeks approvals for its fuels, it’s moving forward with production and distribution plans. It formed a new company called Swift Fuel LLC and has engaged Rob Broin of RMB Energy, a veteran in the renewable fuels industry. Ahead of having its fuel approved, Swift will be constructing a production plant this summer near its headquarters in Indiana. That plant will have a capacity in the 10,000-gallon range, said Zuilkowski, and Swift’s intention is to use end-state processes as close to actual market-ready fuel production as is practical.

When it first appeared, Swift fuel was pitched as a renewable biofuel and it may or may not turn out that way. For its pilot plant project, Swift plans to use waste acetone from both bio and industrial sources as a feedstock. (Acetone is a waste product from butanol production.) The Swift process converts acetone into mesitylene or tri-methylbenzene, the primary constituent of its fuel, so it depends on cheap acetone to make the conversion economic. Assuming it can have its fuel certified long before the 11-year timeline, would Swift propose to market it right away to compete with 100LL?

Ziulkowski told us it would and that he believes Swift fuel can be sold at competitive prices and perhaps cheaper than avgas.

“Can we do it in three to five years? I think we have to,” says Ziulkowski. “We’ve never had as much involvement from the oil companies as we’ve had in the last six months. I think this is because of the ARC. And we always said we intended Swift to be an alternative fuel, not just a replacement for leaded avgas.”

General Aviation Modifications Inc. continues its testing work on its G100 unleaded fuel. G100 is a hydrocarbon-based fuel with high aromatic content, either xylenes or mesitylene, as Swift uses as its primary component.

GAMI’s George Braly told us the company has settled on a formula suitable for testing and it’s pursuing an ASTM approval. However, the centerpiece of its fuel efforts has been obtaining a wide approval under an STC, which the FAA seems to have delayed at every turn.

Assuming it gets through the gating standard, GAMI can begin formal testing through the FAA’s Hughes Technical Center, although it has already done much of the testing the fuel is likely to be required to pass. GAMI is currently expanding its materials compatibility testing, as is Swift, since there are concerns that high aromatic content fuels can adversely affect seals and gaskets.

GAMI is also exploring production options with refineries to produce larger volumes of the fuel for testing and to prove its economics.

Aviation Specialties and Lubricants also has a fuel project underway, but unlike the others, ASL’s product would be a chemical additive blended into a conventional high-octane aviation alkylate. Essentially, it would be a drop-in replacement for tetraethyl lead and would deliver about the same if not more octane, says ASL’s Ed Kollin, a veteran petroleum chemist who also developed the CamGuard engine additive.

Kollin told us he is continuing to refine and test potential additives and that octane results look promising. ASL has no stated timeline for submitting a fuel for approval, according to Kollin.

Although not a replacement for 100LL, the French oil company Total has begun marketing a new aviation fuel in Europe called 91UL. It’s essentially 100LL without the lead made under a standard that was a rush job by ASTM in response to the military drone market. Drones continue to be dominated by piston engines, a large number of which are Rotax 912s. Although Rotax engines can burn leaded fuel, they don’t need the high octane and running on unleaded fuel reduces the maintenance load.

Total is selling 91UL at about a dozen locations in Europe, but we’re not sure if they can or will expand the distribution. It sells for a price between mogas and 100LL and its deployment is widely seen as an effort to push mogas out of the market.

Lycoming cooperated with Total in the rollout and although Lycoming has recently expanded its list of engines approved for low-octane fuel, it has publicaly stated that mogas isn’t what it has in mind, but an aviation-spec’d fuel, which 91UL is.

Kraft says deployment of 91UL in Europe is “a fantastic mechanism” to serve as a template for 100-octane deployment in the U.S. because it’s being done with no additional engine or airframe-specific EASA approval, nor does it require STCs.