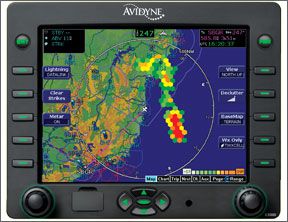 Its interesting to watch brilliantly engineered avionics grow stale.Two years is middle aged for panel gizmos and four years is geriatric. Avidynes popular and feature-rich EX500 is trickle-down technology from the grander EX5000 Entegra MFD. Pilots now demanded more from an MFD than EX500 can offer.

Avidynes answer is the EX600. Call it an EX500 on steroids if you want, but we call it a much-needed improvement and a

lease on life, perhaps for a year or two. Upgrade pricing from an EX500 is fair, but buying a new EX600 is pricey and installation could be a challenge in tight radio stacks as the bigger EX600 demands more vertical space. Heres a closer look.

The EX600 is big but not huge. It stands 4.93 inches high and fits the standard 6.24-inch rack-width. Weighing 4.75 pounds and fairly deep at 11 inches, the box feels substantial and sturdy. Theres a lot of display area at 5.8 inches diagonal.

Lets get this out of the way: From our evaluation, the new display-that sports 25 percent more viewable area than the smaller EX500-is actually dimmer (or at least appears dimmer) than the EX500. Brightness is controlled with a single brightness button on the bezel. Theres also a soft key for putting the display in day or night mode with a single button push. Bezel keys are wired to the aircrafts avionics dimming system.

When we griped to Avidyne engineers about our display findings (the test unit was actually installed in a customer aircraft after upgrading from an EX500 and isnt viewable while he wears his sunglasses). They told us the newly designed transflective display could appear dimmer than some other displays that are collocated in the same area in the panel even though it is designed for better sunlight readability.

conditions but appears dim in certain overcast and cloudy conditions. Still, we noted a substantial difference when we flew the EX600 driven by a Garmin GNS 430W (a display that isnt the brightest either). After focusing on the EX600 for an hour in flight, we jumped in an airplane that had the smaller EX500 and it appeared considerably brighter. Avidyne is dealing with this anomaly head-on and further evaluating our findings in hopes of providing a solution.

We feel the on-screen text for the EX600 is uncomfortably small. It keeps eyes on the display for too long when they should be outside or on the instruments. We wish the EX600s traffic tags, for example, were bigger. The same holds true for textual weather.

Another nit of ours is the Avidynes requirement for 28 volts. Its easy in electrical buses that are 28 volts from the get-go but tough if 14-volt systems where a voltage converter is required. These beefy power supplies are power hungry and weve seen more than one stress a marginal electrical system. A power supply also means there is another remote box to install, with the associated hassle and expense.

Same Ease of Use

Avidyne sets the standard for ease of use, in our estimation and the EX600 retains the EX500s user-friendly operating logic. On-screen data boxes are straight-forward. Intuitive menus on the lower portion of the screen are accessed by rotating the right rotary knob to scroll through main menu pages. From there, soft keys lead the way. Map decluttering is a snap with a soft key dedicated to customizing topography. When you need to scroll across many miles of that topography to eyeball weather and airspace (which is always), Avidyne finally delivers with a smart map panning feature called QuickPan. Panning is commanded by rugged and nicely lighted rocker-like keys on the bezel.

We found the pan feature a welcome addition but also found that large jumps in panning distance were slow. For instance, we were airborne over Hartford and repeatedly pounded the left pan button westbound-out to the Lakes region-to look at an active NEXRAD picture. Either we were impatient or the box ran slower than we expected. We like the single button press that takes you back to present position. You can quickly toggle between present and pan position with a single button push and you can zoom in when in pan mode to study weather and airspace detail.

Geo-referenced charting is through the familiar Avidyne cMax on its own “Charts”page. This offeres Jeppesen Electronic Airway Manual charts and airport diagrams. Once on the Chart page, its reasonably easy to pan around the chart, zoom in or out of the chart or view particular areas. We were grabbing the

right control knobs to command the charts, resulting in a menu-structure fumble since charts are controlled with the left knob.

Theres a day/night soft key on the chart page, too. As one would expect, the departure airport comes up on startup while the list of available approaches at the destination are loaded as part of the flight plan. Along the way, approaches for airports along the route of flight can be loaded via the EX600 Trip Page and a push of the auto-fill softkey.

This Trip Page is where datalink weather is accessed, providing decoded METARS, graphic METARS, Textual TAFs, Winds and temp aloft. Its easy to have a look-see at METARS at surrounding airports along the flight, both as an icon in the list of airports and in detail when you scroll to any airport. Avidyne has perfected the ability to simply evaluate the weather along the route-something other displays havent quite perfected, in our view.

On top of color-contoured terrain base map theres a terrain and obstacle database and the ability to input TAWS-B and EGPWS terrain from a generous list of high-end Honeywell Class B systems. Theres also a rich interface connecting to multiple brands and models of navigators of all vintages. GPS units that output enhanced ARINC labels for things like holding patterns or procedure turns will make result in curved flight plans on the EX600.

All the bases are covered for playing traffic minders: Theres the Avidyne TAS-series traffic as well as L-3 Skywatch and 791 TCAS, Honeywell KTA and TCAS 1 and Garmin GTX330 TIS. With a proposed ADS-B interface through the TAS600 system, the EX600 will no doubt display ADS-B traffic in the near future.

Weather is supplied by the MLB700, a SIRIUS-based satellite receiver with products provided by WSI InFlight. The Avidyne

Lightning comes from Avidynes own TWX670 Tactical Lightning Detection system. Its a modern and impressive Sferics suite. Theres also the L-3 Stormscope that we find stark in comparison.

A modest ship radar interface remains an important requirement for retrofit MFDs and Avidyne wins hands down (see sidebar). Both the Garmin GMX200 I/O and the ancient Honeywell KMD-series are lacking.

Data updates for the EX600 are loaded to the unit through a USB port located on the bezel. Approach plates for the entire country can be uploaded to a single memory stick. The cMax charting capability for Jeppesen approach charts is included in the EX600 base price. Obviously, the charts themselves require a subscription. Updates for the moving map are also through Jeppesen, which is another source of update expense.

Theres no questioning the abilities of the EX600. It does a lot and it does it with ease compared to the layers-deep architecture of the Garmin GMX200. We think this gives the EX600 an edge. The display brightness concerns us. Were certain this can be fixed, but Avidyne says how soon is unknown. We also would like to see an alternate approach-chart option like Garmin provides with their MFDs. Owners are frustrated with the Jeppesen nav data monopoly and cost.

With Aspen Avionics coming on strong with the MFD1000 and Garmins reasonably priced G500 PFD/MFD combo, competition is building. But if all you need is an MFD-especially if older radar overlay is a requirement-we think Avidyne still owns the market with the feature-rich and now big-screen EX600.