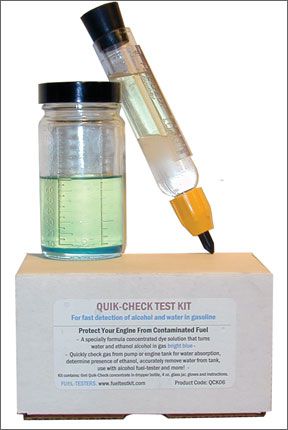 As the number of aircraft engines capable of using automobile gasoline-mogas-rises, so does pilot interest in using it instead of pricier 100LL. And the next time oil prices spike, as they did during the summer of 2008, interest will be greater. But the increasing alcohol content in mogas, coupled with less-stringent quality control when compared to 100LL, makes it impossible to know exactly what youre getting.

That alcohol, specifically ethanol, may not be a problem if youre driving a car or

truck manufactured in the last couple of decades. But for those aircraft engines approved for mogas, theres a catch: Few of them allow large percentages of ethanol. And if youre flying an older aircraft using mogas under a supplemental type certificate, none of them allow it. To be sure what youre putting in your tanks, you need to test the fuel for its ethanol content.

All Over The Map

Blending ethanol into mogas has its roots in the gas crises of the 1970s, but really didnt get going until the late 1990s. New U.S. air-quality rules enacted early in that decade reduced allowable carbon monoxide levels and refiners started adding methyl tertiary butyl ether (MTBE) as an oxygenate to meet the requirements. Soon, however, MTBE was blamed for contaminating groundwater and, as of 2006, it had been banned in 20 states, although no federal ban currently exists. States and localities still had to comply with air quality rules, so ethanol became the oxygenate of choice.

Presently, renewable fuel standards in nine states require blending ethanol with mogas, according to the American Coalition for Ethanol. Fourteen states have incentives for marketing ethanol-blended fuels and many more have on the books various incentives supporting ethanol production. Despite questions about its economics and energy required to produce it in the U.S., ethanols presence in mogas likely will increase.

One problem in determining whether the mogas at your local service station contains ethanol is the lack of labeling standards. Each state sets its own. And because blending is performed at the distributor level, not at refineries, mogas ethanol content can vary widely. Since ethanol has at times been cheaper than unblended mogas, it also has been found in concentrations greater than 10 percent, the common standard.

Ethanol: what it does

Another problem is that ethanol and water get along swimmingly. According to the U.S. Environmental Protection Agency, “Since ethanol and water readily dissolve in each other, when ethanol is used as an additive in gasoline, water will actually dissolve in the blended fuel to a much greater extent than in conventional gasoline.” If a substantial reduction in the fuels temperature occurs-such as when climbing to altitude-what happens next is called phase separation, the forming of two separate solutions.

According to Chevron, “The result…is two layers of liquid: an upper ethanol-deficient gasoline layer and a lower ethanol-rich (up to 75 percent ethanol) water layer … The gasoline layer will have a lower octane number and may knock in an engine. The fuel also is less volatile. The engine will not run on the water/ethanol layer.”

That water/ethanol solution also is corrosive, although how corrosive seems open to debate. Since its heavier than gasoline, it sinks to the bottom of the tank, where most piston aircraft draw fuel to feed the engine(s). Even if the gasoline got to the engine, it would lack the octane the missing ethanol provides. For that reason, the FAA in a 2006 Special Airworthiness Information Bulletin (SAIB CE-07-06) strongly cautioned against using mogas with any alcohol content.

If you burn mogas in a type-certificated aircraft under one of the two available STCs, no ethanol is allowed in your fuel, period. Experimental aircraft operators should refer to their engine manufacturers recommendations. Most will echo the FAAs SAIB.

Since ethanols presence in mogas is bad for aircraft engines and fuel systems and since its likely to increase before alternative aviation fuels or mogas oxygenates are developed and widely distributed, you need an easy method to test fuel samples. Were aware of two basic testing methods. One is a chemical process well get to in a moment; the other uses ethanols affinity for water to your advantage by forcing a phase separation.

The Experimental Aircraft Association sells a kit designed to facilitate the phase separation test. It consists of a small, industry-standard fuel sampling tube and a rubber stopper. Ideally, for this test, the sampling tube should have a base, allowing it to stand on a bench, for example, instead of the standard reversible screwdriver bit. It retails for $15, including shipping, and works as advertised.

MLR Solutions, a consulting and fuels-testing firm, provided two kits for our review. Its $24.95 (plus $6 shipping; quantity discounts available.) Alcohol Fuel Test Kit is similar to the EAA kit and includes the same fuel sampling tube with a slightly smaller rubber stopper. It comes with a pair of nitrile gloves, a bottle with an opening large enough to accept an automotive gasoline nozzle and instructions on how to conduct a phase separation test.

The companys Quik-Check Test Kit, which retails for as little as $10.95, depending on how much solution you need (plus $6 shipping) comes with a glass jar graduated to 120 ml/4 ounces and an eye-dropper-style bottle of blue Quik-Check Solution. The solution also is available in different-size bottles ($6.95 for 15 ml, the largest, plus $3 shipping). Collect a fuel sample in the jar (its mouth also is large enough to accept a service-station nozzle) and add a drop of the blue solution. One of three things will happen: The blue drop will fall all the way to the bottom (no ethanol or water), the entire sample will change color (fresh gasoline mixed with ethanol) or the samples lower portion will turn blue (phase-separated ethanol/water mixed with gasoline).

To run the phase separation test as recommended by EAA and MLRs Alcohol Fuel Test Kit, we added water to a sampling tubes molded-in mark. Then, we added mogas to the higher mark (a small funnel makes this much easier), inserted the rubber stopper and shook it up. We propped up the tube on a workbench and 20 minutes later, a well-defined layer of gasoline atop a nasty-looking slug of water and ethanol appeared.

Putting that aside, we poured second fuel sample into the jar supplied with the Quik-Check Test Kit, then added a single drop of the Quik-Check solution. That drop fell to the jars bottom and stayed there, telling us there was no ethanol in the sample. We found a third mogas sample, and added a drop of the solution to it. Immediately, a narrow band of liquid at the jars bottom turned blue, indicating ethanol. The remainder of the sample was unaffected.

For the time being, 100LL remains widely available and is the preferred fuel for most aircraft piston engines. But, if you use mogas in your aircraft, you need to be aware of its ethanol content and you cant rely on the local service stations pump labeling. MLR Solutions Quik-Check Test Kit and the separately available Quik-Check Solution make testing quick, easy and foolproof. Both EAAs test kit and MLRs Alcohol Fuel Test Kit provide everything you need to perform the phase-separation test. If we were operating a mogas-approved aircraft, wed would stock up on the Quik-Check Solution and use our own sampling and testing containers. Your fuel sampler and a 49-cent rubber stopper from the local hardware store will handle the phase-separation test with good results.

Ideally, ethanol-free mogas would be a widely available option; the damage ethanol can cause isnt limited to aircraft but extends also to older vehicles, watercraft, motorcycles and lawn equipment. In the meantime and until state content and labeling laws stabilize (and even after they do), mogas users need to pay attention to ethanol content.