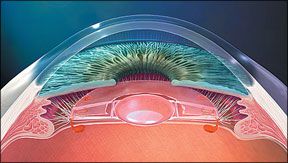 As the pilot population ages, one medical condition afflicts everyone and a second afflicts many. Presbyopia-the inability of the eye to accommodate for close-in focus-is a curse of middle age, setting in for most people between the ages of 40 and 50. The second condition-cataracts-afflicts most of the population, but not everyone requires treatment for it. In our October 2008 issue, we covered the leading choices for pilots facing cataract surgery. Generally, the FAA has no problem with cataract surgery, although the procedure must be reported.

Longtime reader, eye surgeon and AME Dr. Steven Siepser wrote us recently to note that our October article overlooked some options for pilots facing cataract procedures. “The fourth option for cataract surgery,” he writes, “is the use of an accommodating intraocular lens combined with laser vision correction for unencumbered maximum visual performance.”

Laser vision correction isnt a treatment for cataracts, but it does reshape and change the focusing power of the cornea, usually resulting in improved vision without glasses. As with cataract surgery, the procedure passes FAA muster, requiring a report to the FAA to explain the outcome. Barring any complications, it has no impact on medical issuance.

The most common form of laser correction is laser in-situ keratomileusis or LASIK. The surgeon uses a microkeratome to lift a thin flap of corneal tissue, then an excimer laser is used to reshape the underlying corneal tissue. Cataract patients can also be candidates for laser correction, according to Siepser.

Cataract treatments involving an artificial lens date to the 1940s, but these so-called intraocular lenses were rigid plastic, mono-focal devices giving a patient good focus at one distance only, usually distant. About a decade ago, multi-focal IOLs appeared. These lenses are able to distribute light over a range of optical zones to provide near, intermediate and distant vision, thus making patients far less dependent on glasses. However, multi-focal lenses produce more than one image on the retina, requiring a period of training and acclimatizing as the brain sorts through which image is the correct one. In 2003, Bausch & Lomb introduced a new kind of IOL which Siepser tells us is ideally suited for pilots. A second

generation was introduced in 2005. The Crystalens HD uniquely allows the eye to use its natural muscles to accommodate, thus allowing old eyes to once again focus more clearly on near objects, at least to some degree.

Siepser explains that multi-focal implants-a common choice-divide the light into several focal points. The brain sorts out the images and suppresses the unwanted images. The Crystalens isnt multi-focal, however. “The Crystalens actually moves like the lens of a fine zoom camera. Its somewhat akin to the way your eye lens focused for distance and near when you were in your 30s,” he says.

When combined with laser correction, Siepser estimates that 80 percent of patients can function entirely without glasses. The remaining 20 percent may need glasses only for near vision. One clinical study by Northwestern University found that in a group of 112 patients divided evenly between the Crystalens and monfocal IOLs, uncorrected monocular vision was significantly better in the Crystalens group. All 56 of the Crystalens patients had J3 vision (20/25) or better, while 29 percent of the monofocal group had similar results.