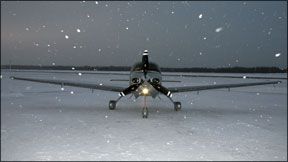 Pilots who fly a lot of weather sort themselves into two groups when it comes to the risk of flying in ice. One group-call them the “Im-willing-to-give-it-a-go” set will launch into any reasonable forecast and deal with the ice as it comes. The other group-call them the Legal Beagles-would do the same, but they get their pants snagged not so much on the actual risk, but whether the FAA will come after them for flying in forecast or “known ice” in an airplane not equipped for it.

Great swaths of pulp forest have been sacrificed in the name of trying to define known ice and were not sure weve succeeded yet. What we have managed to do

is create a not-so-small market slice of would-be buyers to whom an airplane legally equipped for known icing is a big deal. Ever sensitive to the whims of the market, Cirrus has created the perfect airplane for these buyers: The new SR22 line equipped with a TKS-based flight-into-known-ice package.

In the past, weve viewed so-called FIKI packages as more window dressing than real substance. TKS is such an effective system that, in our view, with respect to actual icing outcomes, whether the system is certified or not is a distinction without a difference. To be sure, known-ice packages protect more surfaces and are probably more robust, but our view is that if 10 airplanes certified for known ice and 10 with so-called inadvertent systems flew the same winter systems for a year, there wouldnt be a noticeable difference in outcomes.

So whats to improve? In the Cirrus view, that would be the highest fluid rates of any TKS system on a single and what amounts to significant design decisions that mold the Cirrus icing system into an integrated package. Conclusion: It works better, its easier to use and gives the pilot more control and more choices. Heres how.

Around the Cirrus factory, the non-certified icing system-which has been available since 2005-is called the “no hazard” system, meaning that its certification basis promises no icing protection, but that it has been shown to represent no

operational hazard to the airplane. The FIKI system is fully certified to FAR 23/25 Appendix C standards and promises to be capable of safely handling significant continuous icing. Cirrus, in fact, tested the certified system in about 100 hours of natural icing. Although the two systems outwardly look somewhat similar, the new FIKI system is a clean sheet effort, developed in concert with CAV Aerospace, the Salina, Kansas-based marketer of all things TKS. Compared to the inadvertent icing system Cirrus first offered, the FIKI system shares few parts. It also has some sophisticated additions, especially with regard to re-engineered wing panels.

One challenge for any ice protection system is to protect against accretion across of a range of angles of attack. When the aircraft is in cruise flight, it has a slightly positive angle of attack that exposes a minimum amount of the wing lower surface to ice accretion. But at higher angles of attack-as in climb or slow flight for an approach-the lower surfaces can accumulate significantly more ice, especially in supercooled large droplet icing, which tends to run back and refreeze in rough rivulets.

To address this, Cirrus extended the wing panels chordwise back from the leading edge, providing more active fluid flow area. During a demonstration flight in February, we noticed that on max flow, the wing upper services are bathed in fluid chordwise, from the wingtips to the roots. We cant see how much runback icing could attach itself. Even the ailerons and their gaps got a hefty dose.

With the crash of a Colgan Bombardier Dash-8 Q400 in Buffalo in February, the subject of tailplane icing bubbled to the surface again. Whether that was a factor

in the Colgan crash or not, light aircraft are especially susceptible to tailplane stalls due to how efficiently the tail collects ice and because the flap downwash is close enough to the horizontal fin to sharply push its angle of attack closer to the stall value.

In designing the SR22s FIKI system, Cirrus seemed especially sensitive to this because both the vertical and horizontal fins have generous fluid panels. Because of the tight gap between the elevator horn and the leading edge of the horizontal fin, ice bridging and elevator lock is a worry in the SR22. Cirrus addressed this with a unique, trick machined curved stub panel on the elevator horns. Between that panel and the main horizontal stab panel, the elevator appears to be well protected. According to Cirruss Jeff Knutson, this portion of the system was tested three times in the wind tunnel and for many hours in natural icing to confirm fluid flow patterns.

Both the inadvertent and certified system have the same prop protection consisting of a nozzle at the root of each blade that flows fluid into rubber channels toward the tips. But the certified system also has generous windshield protection in the form of a pair of automotive-style windshield nozzles on the pilots side. They treat the windshield with a heavy flow of fluid which the prop blast spreads to protect a large truncated triangle on the pilots-side windshield. You do have to look through a smear of fluid, but thats preferable to trying to see through an opaque coating of rime.

Speaking of fluid, the Cirrus system has plenty-more than any other piston single

TKS installation on the market. Its contained in a four-gallon tank in each wing, each with its own filler cap inboard of the fuel fillers. To keep from confusing the two, the TKS tanks have smaller fillers and separate keys for the locking caps.

The system is smart enough to keep the two tanks balanced during use, although the pilot can also manually select one tank or the other through the Perspective avionics system. (More on that later.) With its large volume of fluid, the Cirrus can do something else that other systems cant: It can flow truly prodigious amounts of fluid to the protected surfaces. See the sidebar at right for an explanation.

In our view, whats most impressive about this system is something else Cirrus did to help the pilot manage it: The Perspective avionics system provides fully integrated monitoring and management of the TKS status.

When you select any of the modes, a panel pops up on the Perspectives MFD page annunciating the mode that the system is running in and giving an estimated fluid duration, rather like a fuel totalizer. (See the photo, opposite page.) And like some totalizers, it also gives an estimated range for fluid duration at current speed. It knows fluid quantity through float levels in the tanks, not a value the pilot has to remember to input.

Even for a pilot flying a known-ice system, the standing advice is to bug out of the ice as soon as possible, so having duration and range may seem like a gilding of an already sublime lily. But having this information readily and easily at hand is better than scribbling estimates on the back of an approach plate. It simply takes the anxiety out of managing the TKS system, if not flying in ice itself.

Further, the Perspective adds other system monitoring, such as tank leveling, manual switching, auto shutoff, pressure and flow warnings and clogged filter annunciation, to name a few. Other iterations of TKS have included minimal monitoring, but none are as sophisticated or automated as the Cirrus system.

Consistent with this level of integration is what we would call a multi-lateral approach to ice risk mitigation. For those who purchase XM WXs top-drawer Aviator Pro Service, the Perspective will display two weather products specifically aimed at depicting potential icing areas: The Current Icing Product is a NOAA display that depicts icing potential graphically by altitude and by potential severity. These appear on a base map relative to the route of flight.

Another recent product from NOAA available through Aviator Pro Service is called SLD Icing or supercooled large-droplet icing. This condition is thought to represent a hazard serious enough to overwhelm FAR Part 25 ice protection systems. In addition, XM WX also provides current PIREPS on icing. The system empty weighs about 61 pounds and fully charged, the hit is 134 pounds. But because Cirrus chopped some empty weight out of the new models, the payload hit against previous versions of the airplane is only 61 pounds, fully charged. Experienced owners of TKS know, however, that by carefully managing the fluid flow, its not necessary to top the tanks for a typical winter flight. Several owners of inadvertent systems have told us they fly for an entire winter with just one fill-up of fluid because if they find ice, they dont hang around in it.

Given the addition of this sophisticated icing package to the SR22, plus the Perspective avionics system, we would have guessed that Cirrus prices have crept toward the $700,000 price point for a fully equipped model. But under Cirruss latest pricing list, the known-ice package is standard equipment on the top-of-the-line SR22 GTS, whose base price is $530,100. Fully loaded with every option Cirrus has, typical invoice is about $592,000. The GTS Turbo base price is $598,500, also with known-icing as standard. On the GS Turbo model, its a $24,500 option over the basic inadvertent ice package.

Is it worth the upgrade price? In our view, it depends. If youre nervous about the legalities of departing into forecast icing, the Cirrus system addresses that. Although we dont think it significantly adds to utility and dispatch capability otherwise, theres no doubt that its simply a better system.

If we were writing ad copy, we might call the SR22 with this system the ultimate ice fighter. Given the turbos ability to climb above ice, the XM WX icing products to help avoid it and TKS capability to deal with ice when you find it, this system is about as good as it gets. Certified or not, Cirrus gets kudos for cooking it up.