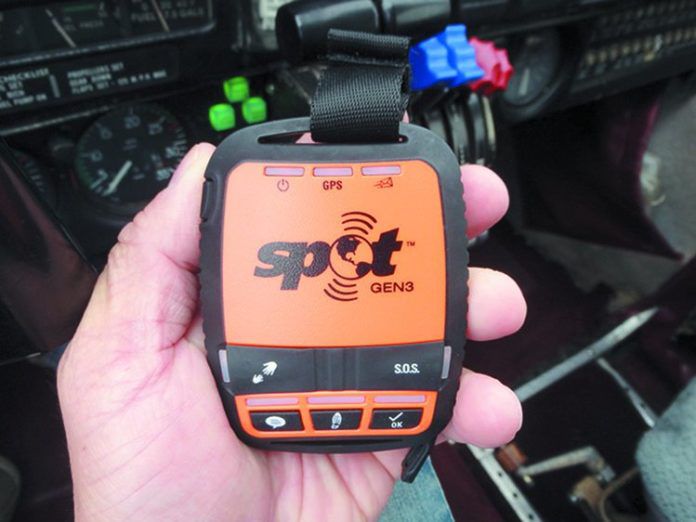 Here is some more real-world feedback on the Spot Gen3 satellite tracker you covered in the November 2015 issue of Aviation Consumer.

I have used the Spot3 locator for several years and find it to be extremely useful. It does its job well and rapidly acquires a GPS fix as long as it has a clear view of the sky. Surprisingly, many times it has acquired a fix while sitting in a hotel window sill. It may take a while, but it beats getting dressed and going outside to get an unobstructed view of the sky.

Also—and this is important—when I forget to send a Spot fix, a family member almost always worries and calls me to ask if things are OK. The absence of a Spot message is enough for them to become concerned. The Spot gives them the location, and in one click from the message received from Spot, our friends can explore our present location via Google Earth.
Tom Osborne
via email

I have owned four Spot satellite receivers. Two of them were the original design and since they didn’t have a lanyard to attach the device to something, I lost one.

The second generation Spot had a lanyard and the keys were protected so that it was difficult to accidentally send messages. It was easy to tell what it is doing.

But I think the company outsmarted itself with the latest Spot Gen3. The two best features are its small size and the tether strap. Spot added other features that make the device very difficult to tell what it is doing. Because it has so many buttons, there are now button sequences that must be activated for certain modes. I verified this with one of their reps. Fortunately, I never had to activate any of the devices because of an emergency.
Dennis Wisnosky
via email

We have used all of the Spot devices in aircraft and on the ground and think the latest Gen3 has the best ergonomics of them all.

Lockheed Martin can track a Spot and initiate search and rescue if it stops moving. As you note, some functions are initially quirky, but nothing a quick read of the users manual can’t solve, in our view. If that doesn’t work, we also found Spot’s technical support to be superb.

Finally, a publication acknowledges that Garmin finally has some competition with an article outlining its well-rounded product line (November 2015 Aviation Consumer). My avionics installer—who wished not to be named—is trying to convince our flying club to install dual Garmin GPS navigators because we already have a GNS430W, which we wish to retain as a secondary backup. The same aircraft has an Avidyne traffic system so we don’t have any problem mixing brands. But are we making a mistake mixing a new IFD540 GPS with the old GNS430W? In other words, are the systems compatible
Anthony Lombardo
via email

The only useful compatibility you might want between the Avidyne IFD and your secondary Garmin GNS navigator is crossfill. This is where active flight plans loaded in the Avidyne are automatically sent to the Garmin unit. Avidyne tells us Garmin has a proprietary crosstalk protocol, so it won’t work.

Interesting article on intercoolers in your September 2015 issue. I bought a normally aspirated Cessna 210 and when the engine reached TBO, converted it to a T210 using a one-time STC and local FSDO approval with a DER letter. I added a Turboplus intercooler, which is available from Tom’s Aviation in Long Beach, California.

Based on my JPI engine analyzer, the intercooler cools the induction air roughly 50 to 70 degrees between 8000 to 15,000 feet. One problem with intercoolers is that you have to pretty much throw the POH out the window when considering percent power and fuel flow. I’ve read somewhere that each 20-degree cooling is about one inch of manifold pressure, which is useful if you are operating rich of peak. I typically operate lean of peak, set the mixture full rich on takeoff and climbout, then set power for 30 inches and 2500 RPM, and lean fuel flow to 14.5 GPH, which is about 70 percent power. This keeps the CHTs below 380 degrees and the TIT below 1580 degrees. Am I doing this right?
Peter VerLee
via email

When it comes to engine operation with an aftermarket intercooler, that’s a question best answered by the holder of the STC, Peter. You should also find precise operating data and limitations in the flight manual supplement that came with the intercooler installation. While you’re at it, be sure a skilled mechanic has the fuel flow set up properly. If not, you run the risk of over-temping the engine.