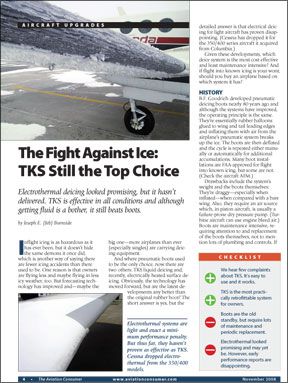 I just received the November 2008 issue of The Aviation Consumer and read the article on deicing. I have a TKS system on a Mooney 262 (a 231 modified firewall forward to 252 specs). From my experience, dont trust estimates. The original installation cost was estimated at just over $25,000. By the time we were done, it was over $35,000. This kind of price escalation is nothing new to people with experience in aircraft maintenance and upgrades.

More important, I was disappointed in what the article failed to disclose about TKS. Your article clearly pointed out the critical deficiencies of Thermawing and

pneumatic boots, but failed to state the TKS is ice prevention and is not deice.

While most people and even the manufacturer talk about it as a deice system, it will not deice light rime ice nor will it deice clear ice once it has frozen into the pores.

I am speaking from actual experience rather than theory. And while TKS may deice clear ice in some situations, it will not deice many clear ice situations. TKS is better described as ice prevention. To be safe, you must turn it on before you get into ice. If you fail to turn it on before you see ice on the wing, you may not be able to get the ice off until you fly into warmer conditions.

This means that you waste a lot of fluid because you turn it on for icing conditions that do not really exist. It also means that if you are on a long flight and you pass through suspected ice on the climb and turn it on and forget to turn it off, you may not have fluid later when you need it for the descent. In addition, many FBOs dont carry or may not have the fluid in stock.

There is a logical disconnect about flights into known icing and TKS on most aircraft that are not STCd for known ice. Since you need to turn it on before you get into ice and because your aircraft is not certified for flights into known ice, rather than turn it on, you should turn around. If you know the ice is there, you shouldnt be. If you do not know it is there, why would you turn it on? If you wait until you see the ice, it could be too late. It is this circuitous logical disconnect that will make me seriously consider the Thermawing technology for my next aircraft.

In addition, theres another deice technology developed by Innovative Dynamics, Inc. (IDI) in Ithaca, New York. The technology was sold to Cox who, last I heard, was providing it to Cessna for use on one of their jets. It uses a set of

electromagnetic coils that thump the underside of a leading edge metal skin, shedding the ice in a way similar to a pneumatic boot, but more reliable and with less maintenance. I have lost track of the product development, but was very hopeful it would make it into the GA market.

I just read the article on the TKS deice system in the November Aviation Consumer. I have always wondered why the hot engines exhaust (or some of it) could not contribute to a solution. It could be run through a pipe/tube in the leading edge and exhausted out the end. This would warm the leading edge and, if above 32 degrees, prevent ice.

I realize some weight would be added. But no one can tell me why such a system would not work. Can you tell me if this is possible or would the exhaust not be able to raise the temperature enough? What am I missing? Or is it simply that no one wants to get a new system through the FAA approval process?

We think such a system could work and, in concept, isnt much different than the hot bleed air systems used in turbine aircraft. But there are two significant barriers against it being developed. The first is money. With two established systems already in place-TKS and boots-we think the business case for an exhaust-based system isnt compelling, especially in a declining aircraft market.

Second, weight and complexity. The plumbing for such a system isnt necessarily simple, given that a fairly large volume of hot air has to be kept hot all the way to the end of the wings to be effective.

Here are two reasons to carry an ELT aboard:

2) Reduce public expense for the search and rescue.

Many items of aircraft structures, power plants, electrical systems and avionics are expensively backed up or strengthened above normal operating requirements, either in the initial design, by ADs or spontaneously by the owner.

Without formal research, I would opine that a large number of these “double features” present failure risks lower than those factors which would provoke an ELT activation.

Were not sure about that. There are a lot more alternator and vacuum pump failures than there are crashes in which an ELT makes a difference.

Next time you review 406 ELTs, please mention replacement battery cost. Even though they are replaced only every five years, theres a significant difference in prices, enough that when the $350 battery in my Artex is due, I will probably replace the entire unit with an ACK, which is pricing its lithium battery at just $100.

The fact that GPS inputs are included standard with the $600 ACK is the added feature that seals the deal.

After exploring the potential issues of the recent AIG news and effects on my policy for a 1974 Commander 112A, I was pleased to learn that not only would they renew me for 2009, but the premium would be going down by 20 percent to $1610.

I carry $90,000 hull and $1 million liability. Every year, I call AVEMCO and am amazed by their quote. This year it was $5600 for the identical coverage. Yikes! Lets all say a prayer that AIG survives.

Worth noting is that AIG is the beneficiary of a taxpayer-funded bailout-essentially a free ride on bad business decisions. Hcc Insurance Holdings, AVEMCOs parent, hasnt tapped federal largesse.