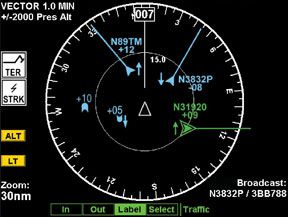 Nice article on the Garmin 330ES. I strongly agree on not jumping to ADS-B technology right now. The FAA is working with an Aviation Rulemaking Committee (ARC) to figure out what to do with the universally opposed ADS-B NPRM from last year. Things could change.

If you have a WAAS navigator, the Garmin 330ES is probably the cheapest way to comply with the ADS-B mandate. Add the 330ES and you have “ADS-B out” (which is what is required in the NPRM), plus the 330ES suffices for the transponder that you still have to keep after complying with the NPRM.

One thing that keeps getting forgotten with ADS-B is the VFR aircraft or the low-end IFR aircraft. If you dont have a WAAS navigator-and there is zero reason to

spend the money to put one in a VFR aircraft-then you are talking some big bucks to comply with the NPRM with the 330ES. Youll have to get a WAAS navigator and the 330ES, plus installation of a GPS antenna. The 330ES can give you TIS traffic, but it wont give you TIS-B traffic from ADS-B aircraft transmitting their position to you.

With the UAT, you can purchase Garmins GDL-90, which includes a WAAS chip and the equipment for sending and receiving ADS-B signals. You still need to keep your transponder unless you buy some kind of display. Nonetheless, complying with the ADS-B-out NPRM would be cheaper with the UAT for the VFR or low-end IFR aircraft, since you dont have to buy the WAAS navigator.

So if you have a WAAS navigator and are happy with TIS, then the 330ES is the cheaper way to go. You get the ADS-B out, TIS traffic, and you dont need an extra piece of gear-a transponder. If you dont have a WAAS navigator, then the UAT is probably best. But youll have to keep your transponder and you wont get any traffic (TIS or TIS-B) unless you have an appropriate display.

I believe all the ADS-B installations required top and bottom L-band antennas to comply with the specs. But the right answer now is to wait and see what will eventually be required.

On the admittedly weary topic of lean-of-peak flying, I can report my experiences with the Columbia 350 I have had for two years and 260 hours. The engine is a Continental IO-550N Platinum Edition. I was taught to fly LOP during factory training at Bend. Until then, I had been taught the dogma of 50 degrees rich of peak.

Cruise CHT has never been remotely a problem. I always climb out ROP, try to maintain at least 120 knots after initial climb and do a cursory lean at 5000 feet. My cruise CHT is about 350 degrees or below and my oil temperature stays at the lowest point of the green band. I treat 400 degrees CHT as absolute redline and try hard, usually successfully, to stay below 380 degrees in climbout.

With this regime, I routinely fly the 350-mile nonstop from northern Virginia to Palm Beach. The engine has been entirely trouble-free. Oil use was a little high when the engine was brand new, but is decreasing steadily.

I would never, never adopt ROP as a regime again, at least so long as I had accurate fuel delivery and monitors for each cylinder, as with the G1000.

I dont recall the issue, but in any case, a letter writer shared his experience with a getting a good insurance quote with AIG. (See Aviation Consumer, January 2009, page 32.) The editors opined that AIG had gotten a bailout. The AIG Aviation Insurance Company and AIG Financial (who got the bailout) are completely separate companies, separate books, separate balance sheets and so on.

While I dont agree with the bailouts, I think there is enough confusion about AIG and the editors comments only added to it.

While its true that these are separate companies, its also true that the aviation insurance division is part of the AIG group. Technically, theres a fiscal firewall between the divisions, but we think its unrealistic to assume theres no connection.

The House Financial Services Subcommittee has asked the GAO to look into market distortions caused by the bailout. AIGs property and casualty segment and aviation, by the way, is on the target list for that probe.

For more detail, see this podcast on our sister publication, www.avweb.com. Heres the link: http://snipurl.com/b03eb