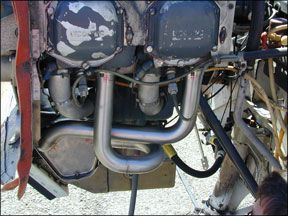 Id like to add some experience to your report on Power Flow exhaust system article in the February 2009 issue. We installed a Power Flow exhaust on our 1976 Cessna 172M about eight years ago. Its been long enough that I cant provide any reliable performance improvement numbers, but what I read in your article is about what we experienced. A significant advantage is the ability to lean more with our Lycoming O-320-E2D. I advise all our pilots to lean aggressively. We installed an

engine monitor and discovered that the only engine or flight mode that causes heat problems is high-altitude Vy climb, when the lower density of the air doesnt provide adequate cooling below 70 knots or so. This is at altitudes above the stock service ceiling of the 172.

Your article failed to mention a significant advantage of the system that weve discovered–an approximately 3000-foot increase in the service ceiling. The airplane is now just capable of the flight levels in winter. I intend to get charts one of these days and try it to see what kind of comments I can get on the radio.

I have frequently taken advantage of the wintertime jet stream in our Skyhawk with a portable oxygen system. I have flown from Ames, Iowa back to College Park, Maryland, 800 miles in 5:25 using 25 gallons of gas. I had a 70 knot tailwind at 17,000 feet. Two years ago, the collector pipe cracked and we replaced the system with a more recent version. Power Flow encouraged us to check the prop balance, which we discovered was causing a lot of vibration.

When we replaced the system, we went with the short stack version, but discovered it did not provide the altitude performance, so we changed it back out for the resonator pipe.

We feel the altitude performance is well worth the added maintenance effort of removing the pipe to drop the lower cowl.

I was interested in what you said about Reader Plates in the March 2009 issue, since I have been using this system. Mostly, it was right on, but you say you have to scale up to see the details, which changes orientation.

My 58-year-old eyes with glasses that havent been updated in two years read the detail just fine without scaling up. I did need to scale up to read ODPs.

You complain about needing a light at night. Paper plates need a light also. Sony does sell a light for the reader. I did not like the looks of it, but some people might. I wear a flashlight around my neck. I dont carry paper charts at all-just the Sony reader.

I did buy a cord to charge the battery from the cigarette lighter. It is worth noting that the battery gets charged automatically from the USB connection when you download the charts every 28 days. Unless you fly approaches every day, thats enough charging.

You are correct that a robust internet connection is needed. But it downloads unattended-no need to sit there watching it. On a fast FIOS connection, it takes about an hour, while Im watching TV or reading a book. As for mounting, I just put it on my knee, where it stays put. When Im not on approach, I throw it in the flight bag. The stiffness of the unit compared to a floppy NACO book is a big advantage.

I left the reader in the airplane overnight at 10 degrees F with frost, dragged the airplane into a heated hangar and the Sony Reader, with its solid state memory, did not miss a beat. I recently did a two-week cross country. From my home base in New Jersey, I stopped in Ohio, Missouri, Colorado, Arizona, Mississippi and Texas. Going paperless was wonderful.

As a pilot fortunate to have experienced a taste of water flying, I really enjoyed your article on floatplanes in the February 2009 issue. I would like to add a great company to your list of float manufacturers for experimentals: Montana Float Co., of Libby, Montana. They can be contacted at www.montanafloat.com or 406-293-9026. Montana Float builds the highest quality aluminum floats for a large range of aircraft.

In both your previous articles on surgery for cataracts and the recent article on LASIK plus intraocular, you failed to point out one essential fact: Under FAR Part 67, an applicant for either a second- or first-class medical must demonstrate 20/20 distant vision in each eye separately.

Many ophthalmologists, when performing corrective surgery, urge their patients to have one eye optimized for near vision and one for far, so that ordinarily, no glasses will be needed. While the accommodative lenses reduce this need, they may not eliminate it altogether.

While this works well under ordinary circumstances, I have had several airman quite upset that they now had to wear glasses at all times while flying, rather than merely posses “cheaters” for near vision because this had not been made clear.

Any pilot planning this or any other corrective surgery should discuss the proposed surgery with an AME or aviation-knowledgeable physician to avoid disappointment.