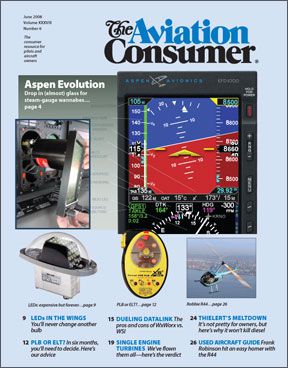 Just picked up the June issue of The Aviation Consumer and saw that you have a write up on the Aspen. I took delivery of my airplane (BE35) with its new avionics stack on May 12. Aspen was 12 days late in delivery. All up, the bill was about $45,000.

I am blown away by the Aspen. There are some things left undone, which we hope will be added in later software revisions. Most important, everything promised is there and it works! Most impressive. In the last month, I have been torturing the

Aspen trying to make it foul up, but havent managed to make it do so. It certainly has revitalized the autopilot!

I read on page 7 of the May 2008 issue, under “Our Analysis” that you recommend leaning aggressively. Can you define that for me? I have an IO-550G and now lean to about 75 degrees rich of peak. There seems to be much debate over leaning, just as there is for oil.

Were going to withdraw the comment “lean aggressively” and replace it with the comment “lean sensibly.” Given the cost of avgas, we think that means running lean of peak to whatever degree produces acceptable speed, fuel economy and engine temperatures. We increasingly believe that rich of peak operation is untenable, at least in those engines capable of running lean of peak.

In your July 2008 issue, you say, “Forget cabin size, payload, range or safety-lets just go faster than anyone else. And for those buyers, Mooney has just the airplane…” In the words of John McEnroe: You cant be serious! Surely you are not saying those who would sacrifice safety for speed should buy the Mooney Type S. But just what is your implication? In what is otherwise a good article, why did you add the word “safety”?

Must we be so literal in everything we read? We were using editorial license to point out that speed is the only consideration for some buyers. Safety is more important to others and this is one reason, we believe, that Cirrus outsells Mooney five or six to one by offering a slower airplane. Because safety is, to a degree, between the ears, the Cirrus parachute adds to perceived safety, whether it actually delivers not. That was our admittedly figurative point. And stop calling us Shirley.

I can not believe that you fine folks did not include the Silver Eagle in your article on single-engine turbines. (See June 2008 Aviation Consumer.) Although not a high-production airplane, the Silver Eagle is in a class by itself. My 1978 P-210 has a Rolls Royce Allison 250-B17F/2 gas turbine that has been around for more than 40 years.

It weighs about 200 pounds and delivers 450 SHP. Jet A burn is about 24 GPH at 23,000 feet. True is about 220 with the gear doors. Range is 1200 miles and I can still carry a load. State of the art avionics, TKS, speed brakes, new plumbing, new paint and new interior make it a bargain at under a million.

Thats because we were covering only new turbine aircraft, not conversions. Well get to the conversions eventually. As you note, the Silver Eagle is a good one.

With regard to your article on boutique engines in the July 2008 issue, I recently installed a Lycoming factory overhauled O-540E4B5 in my Cherokee Six. Lycoming now incorporates roller lifters in all their engines-new, rebuilt and overhauled. I traded in a narrow-deck engine and got a wide-deck back with the new lifters and because the lifters require a different case, I got a new crankcase, too.

Lycomings list of new parts includes the cylinder assemblies, the crankcase, the cam (because the lifters require a different profile), the lifters, pushrods and associated shrouds. As far as I can determine, none of the field overhaulers has access to these lifters. For engines like mine, which have a history of rather poor top-end lubrication, these lifters might make a difference.

Actually, the lifters should address cam spalling issues with Lycoming engines, which have proven to be an expensive nuisance, especially in engines flown infrequently.