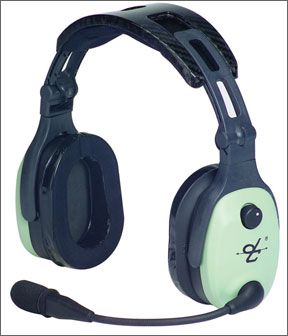 I read with interest your report in Junes issue comparing various ANR headsets. Your conclusions about the new David Clark ANR X11 were spot on. I have been a supporter of David Clark and their products, having been the owner of a pair of H10-13.4s for a number of years.

Recently, a buddy and I bought a Nanchang CJ-6A-not the quietest of warbirds to say the least. After a few hours of flying, we found that a passive headset wasnt going to work. Hearing one another over the push-to-talk intercom and calls from the tower were difficult and potentially dangerous due to missed communication. In order to wring out the maximum enjoyment from our ride while staying safe, we knew we had to invest in a good pair of ANR headsets.

In March, given our previous experience with our regular David Clark headsets, we opted to buy the new X11s. Before plunking down $1000, we asked about the return policy of the shop. We were told they had a no-questions-asked, 30-day return policy. So we ordered them.

Having had previous experience with a LightSPEED ANR headset, I was expecting to duplicate the wow factor with the X11s that I had experienced with the LightSPEEDs-that almost instantaneous blanket of quiet that kicks in after a few seconds.

That didnt happen with the X11s. Instead, what I got was a muted rumbling that ebbed and flowed depending on which way my head was turned. Any combination of adjustment to the intercom or headset volume didnt change things. To make matters worse, we experienced an annoying squeal whenever we pushed the intercom button to communicate. Thinking it was our intercom system, we pulled out the manual and made several adjustments with no appreciable improvement.

After a few more flights in the CJ with disappointing results, we were concerned that we were destined to have to put up with a noisy cockpit that no ANR headset could reduce to acceptable levels. Then, a local flying school instructor friend offered us the use of her Bose X ANR headset. Problem solved. Even at idle, with the ANR feature turned on, the noise reduction was remarkable.

But would it work at cruise power when the noise level is at its peak? Yes, yes and yes. Clear intercom and tower communication at close to a level that you would get in a non-radial-powered general aviation airplane. I know-we did the comparison in a Cherokee. The next day, we returned the X11s and ordered two Bose Xs. Twenty-five or so hours later, the smile is hard to wipe off my face.

I have a lot of respect for the way David Clark has contributed to the advancement of safe and reliable communication in the cockpit. However, a sure sign of a company in decline is to ignore what customers are telling you. Compound that by punishing your loyal distributors when they confront you with the reality that this particular product doesnt measure up is disappointing to hear. I hope for David Clark that they wake up and realize that getting it right may take more than one try.

Thanks for publishing what is the most fair and unbiased magazine in aviation. I, for one, am glad you called David Clark out for their actions with Gulf Coast following your article. When the X11 was introduced,

Flying ran two full-page ads for it, plus an article and a little blurb in the news briefs section. You cant tell me that their decision to print those two “news” articles was not influenced by DCs purchase of all that ad space. You really cant tell me theyre printing an unbiased review comparing it to competitors and throwing in lab testing results as well. And I havent read a word about customer returns of the product.

If it werent for your magazine, I (and many others) would have to buy products that are recommended based on the ad revenue they generate, and not any form of scientific and real-world testing. Keep up the good work. Im happy to pay the extra cost for the subscription to make up for the ad revenue you guys dont get.

By the way, Im now going to go out and buy a David Clark H10-13.4 based on your testing. Ive been stalling the purchase of a headset for three years waiting for your article. If I have one criticism, its that you guys took a long time to print a review on this ubiquitous piece of cockpit equipment. This topic-passive headsets that the average Private pilot would buy-is one which I think you should revisit every two to three years.

Iridium shrmiridium-great if you really actually have to talk on the phone up in your cabin-class twin or single and want to spend the bucks, but as most GA pilots probably know, just leave your cell phone/PDA on as you cross the country and youll at least get text and e-mail for free as you pass by towers enroute.

I fly max six-hour legs between Wyoming and Ohio in my A-36 and nothing has ever come up that is so important that I need to have a cell phone. But as you pass by towers on the ground, you get your e-mail and text just like being on the ground. Works for me, no extra cost or weight and when I land to get gas, I know if I have some pressing matters to deal with, business or personal. I can be ready after engine shutdown to use my cellphone on the ground. Efficient, safe and cheap.

Out of Touch Numbers

I found your article on top 10 safety investments to be very insightful except for one glaring, completely out-of-touch-with-reality assertion that one can get a Commercial rating for $1500 “including airplane time.” I about fell out of my chair when I read that. That may be the case if you already have all the required aeronautical experience and complex training under your belt and all you have to do is learn the maneuvers and take the written and the checkride. But I doubt most of your readers are in that fortunate situation.

As a 300-hour Instrument-rated club pilot who currently flies 172s and Warriors, my most optimistic estimate is that Id be looking at a figure closer to $3000 to $5000 to get the additional experience and training needed to qualify for the Commercial.

And like everything in aviation, the actual cost will likely be higher. Then add the cost of the written test, prep materials and checkride to that. Maybe you can disregard this if you own the complex airplane and only count your fuel costs, but how many of your readers does this describe? I agree that adding ratings is an excellent safety investment, but be realistic on how much that investment will cost your readers.

We see the point. But most of our readers are aircraft owners whose average time and experience would easily meet the Commercial pilot and/or ATP requirements.

Your article on the GNS480 is the first serious consideration of this equipment I have seen. When combined with the MX20 or standing alone, its a powerful and manageable system for serious IFR flying.

Why Garmin has not promoted this box that has been WAAS enabled for at least two or three years before its own boxes is disturbing for those of us who have purchased this system. I can only hope others who use it will promote it even if Garmin wont. If this system is orphaned it will be true shame.