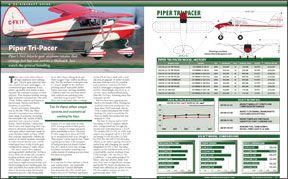 I appreciated very much your report on the Tri-Pacer. It really took me back to when I did my flight training in my flying clubs Tri-Pacer in 1969 at an hourly rate of $8 wet. I will never forget the thrill of my first flight in the “milkstool,” with its amazing performance, stability and sink rate compared to the 150.

It was a nice flying airplane, faster than the 172 and good for short hops with a load of three or four folks. You forgot to mention its signature, airliner-like trim

crank which was mounted on the ceiling over the power quadrant…way cool!

In your discussion of mods for the Piper Tripacer (PA 22-150), you did not mention what I found to be the best of them, the Plane Booster “droopy” wing tips that I purchased and had installed. My airplane, a 1956 model Tripacer with these tips, is pictured in James Ellis book,

Buying and Owning Your Own Airplane.

One thing not mentioned in the Plane Boosters advertisements is that the tips improved crosswind handling because of the increase in aileron control. Another advantage, because of the improved low-speed controllability, is that in a power-off stall and with the wheel way back, the airplane merely would sink, with no drop-off of either wing.

Let me tell of one difference between an LLC and a corporation (see August 2008 issue) that caught me wrong-footed. My accountant had me create an LLC and capitalize it with my airplane. The FAA wont allow me to register the airplane.

As a legal immigrant, I can own a U.S. registered airplane in my own name without hassle. Alternatively, I can register the airplane through a non-citizen corporation, so long as it flies less than a limited proportion outside U.S. airspace and I file paperwork. But the FAA does not accept any registrations from non-citizen LLCs.

Made in China: Say It

In the headset Product of the Year and when you tested the Zulu headset you did not say where it is made.

That is a big issue with me and many others; the Zulu is made in China. The Bose is made in the U.S. Why not put that in the information on both headsets?

Good point. Well do that in the future

As I am sure many, many people will point out, the August 2008 article on best fuel economy airplanes has an error. The table has the Arrow and Turbo Arrow engines reversed. Just the engines, the speeds and MPG look right, at least to me.

I have a 1987 Bonanza F33A with a TCM IO-520BB that I typically run LOP at a fuel flow of 12.5 GPH or 25 degrees LOP on the richest cylinder. I use a JPI 700 for leaning and have GAMIjectors. My problem is that my engine gets significantly rough if I lean it far enough to get the number 4 EGT below 1500 degrees. At 7000 or 8000 feet I usually run 2380 RPM and 23 inches with wide open throttle. This is 12.5 to 13 GPH and my EGTs are high, while my CHTs are comfortable. I know the wisdom is that the high EGT does not lead to burned exhaust valves but in the last 600 hours, Ive replaced or overhauled all six jugs-two cracked and the others had exhaust leaks.

I am worried that 1520 degrees or so may be just plain too high for comfort. I can cool things off with fuel, but then the CHTs are higher and Im burning 16.5 GPH to get only 75 degrees ROP. By the way, I fly about 25 hours a month. I would really appreciate your advice on what I should be doing.

Youre on the right track by flying lean of peak to achieve the best economy and lowest CHTs. We wouldnt worry about the high EGTs and our view is that they arent a factor in your cylinder defects.

You didnt mention the vintage or source of your cylinders, but until about two years ago, we heard many complaints about premature failures in Continental factory cylinders, many due to loss of compression caused by leaky exhaust valves. Lately, those complaints seem to have abated. CHTs in the mid-300s strike us as the best place to operate the IO-520 and we think youre doing everything right.