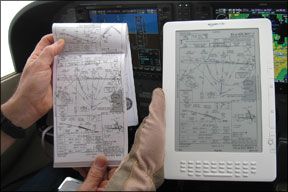 Ive now used the DX (via AirBrief) on a few flights. I find it better than any plate system I have used. Including government plates, Jepp Q service and JeppView on a tablet PC. Page turns are a bit slow and it doesnt have real zoom as you say. I have used both the terminal books and downloaded the airport I was flying to using airbrief.com for the destination airport. The fact that you can get to airbrief.com via the Kindle is great. The single airport PDF reduces the hassle factor

The biggest negative to me is that these are not Jepp plates. I look forward to their entry into this market.

Reference your article on Garmin GTX330ES in the February issue, I have a question. I am another owner who lost TIS (traffic information service) when Pensacola went from ARS-9 to ARS-11. Do I understand your article to say that if I upgrade my GTX 330 to 330ES I can again display traffic on the GNS530?

The GTX330ES, which has extended squitter output, will not receive ADS-B traffic data. As we noted in the article, this is not a full-up ADS-B system like a Garmin GDL90, which will receive and process ADS-B targets for display on an MFD. Instead, the GTX330ES pulses 1090ES output only. So, the short answer is no, it doesnt change your ability to see traffic in non-TIS service areas.

As someone who strongly prefers round dials for airspeed and altitude display, I found your sidebar article “Analog Preference and the Rise of the Machines” in your July 2009 edition of interest. Curiously, while reading the June 29, 2009 edition of Aviation Week and Space Technology magazine, I found something pertinent to this discussion.

Their review of the new Bell 429 helicopter shows the Bell panel using Rogerson Kratos LCD displays with virtual steam gauge displays for altitude and airspeed on either side of a large circular AH. The displays are in a narrow vertical rectangle format, which is interesting considering that your articles have said that Garmin and Avidyne and others claim that they dont have space for virtual steam gauges on their wider horizontal rectangle displays. Maybe there is still hope that Garmin or Avidyne or someone else in the GA market will eventually offer a display with virtual steam gauge airspeed and altimeter. With software control, there is no reason it couldnt be a user-selected option.

I have a Horizon e-tach and agree with your comments and criticisms. (See Aviation Consumer July 2009.) I dont find the constantly shifting right digits annoying, but the fact that it starts counting at 800 RPM means that your maintenance bill goes up unless you taxi slowly and idle at minimum throttle.

It was easy to install and I do like its added features compared to a basic tach. I think that there is room for improvement in the e-tach business though. Why doesnt anyone make a tach with an LCD display that you can switch between analog and digital displays (or both)? It could easily incorporate all the features of the Horizon.

Regarding your article on electronic tachs, I have a Horizon in my Viking. I like it a lot, but it took some time getting used to the digital display. I think the main difference with analog and digital as far as looking at them is that with analog displays, you get an instant visual indication of where you stand whereas with digital you actually have to read the numbers.

Think of a digital watch. To tell the time, your mind has to go through the numbers, while with an analog watch, you instantly get a visual depiction of the time. Good article.

I just read the letter from Philip J. Blank in the July 2009 issue regarding the cost of his annual inspections on a Cessna TR182. My experience has been:

With reference to your article on BRS in the August 2009 issue, there is a safety paradox not addressed in this article. Without the BRS, the Cirrus would not have achieved certification. With the BRS, the aircraft was certified and there were many more opportunities for accidents.

A more complete evaluation of the BRS would have to consider these additional fatal and severe trauma crashes. The BRS “saves” in Cirrus aircraft may be more than the “fatals,” but the fact is the BRS made those “fatals” possible.

Forgive our cynicism, but this strikes us as unlikely because it assumes the Cirrus couldnt have happened in any form if BRS didnt exist. It might be a different airplane, but like the Lancair/Columbia/Cessna, it could have been brought to market in some form.

Its not unusual to have a few squawks following major engine repair or overhaul on an aircraft engine. When that happens, its nice to have used a shop that takes care of the problems with minimum hassle or cost to the customer. Having dealt with Signature Engines (Lunken Field in Cincinnati, Ohio) in the past, I decided to have them take care of the needed overhaul on my Beech Debonair last year. I am an A&P with inspection authorization and had overhauled the engine in the past, but just did not have the time or interest in tackling the job again.

Bill Schmidt, the owner of the business, gave me a competitive price including factory new cylinder assemblies and having the prop and all engine-related accessories overhauled at the same time. When I picked the airplane up, there was a noticeable gain in power and cruise speed-6 to 10 knots. But as luck would have it, I did have a couple of oil leaks that I could not identify. After fussing with it for a few hours, I called Bill and told him Id like to bring the airplane back and have him take care of the problem. I arranged for a neighbor to fly up with me and made plans to visit the Air Force Museum at Dayton while the repairs were made. Stopping the leaks required replacing a gasket in a difficult location and also pulling the engine and replacing the oil sump. The guys at Signature worked overtime to make sure I could leave the next day. There was no hesitation about Signatures commitment to make me a happy customer.

Bill gave me a vehicle to drive to Dayton, reimbursed me for my overnight room and meals and filled my tanks prior to my departing for home. This is the kind of customer support that keeps customers coming back. If you are in need of major engine maintenance, you should check out the guys at Signature. I highly recommend them.