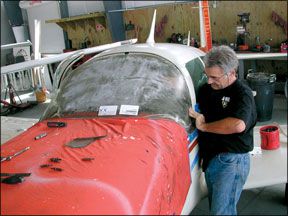 Aviation Consumer, there is a very good reason you could not perceive a reduction in sound after installing a thicker windshield in your Mooney.

you were only getting that much reduction in one location. The inability to remember the previous sound level accurately is also a reason, so your measurements are the only way to really tell. By the way, the cockpit noise in a 747 at the ear next to the side window is about 85 dB at cruise.

I just finished the article in the August issue about replacement glass. It briefly mentions that windscreens are available in clear, gray and green tints in one of the sidebars. Could you elaborate on the reasons for selecting a gray or green tint rather than sticking with clear and a good set of sunglasses?

Actually, says LP Aero, theres no single reason to pick one tint over another. Gray is the most popular by preference, but both green and gray reduce light transmission by 25 percent, which is “noticeable if you notice it,” in the words of LP Aeros Jeff Pfister. In the end, the decision is analogous to the good set of sunglasses you mentioned. Pick the color you like and go with it.

In the article on the Diamond Twin Star with FADEC, you seem to indicate that the engineers didnt think things through, but I have a different view of things. I am a practicing electrical engineer and failure analysis is very important in my business. I am not in the aviation business.

In any light aircraft, it is a bad idea to depart with a dead battery. Many have done it, including myself.

Ive not done it in my 1965 Debonair, but when I used to rent Cherokees, someone would leave the master on with the obvious result. Departing with a good alternator and a dead battery results in being stuck at my destination with a dead battery that wont start the airplane. A bigger problem would occur if the alternator quit in flight.

When the battery is dead in an airplane, the battery needs to be brought back to life with a trickle charger or something similar over a two- to three-hour period. This has been true for the past 50 years. Jump-starting both engines in a twin or the engine in a single was never a good idea. In an airplane where electricity is more important, such as airplanes with glass cockpits and/or FADEC, this becomes even more critical. You mentioned that the POH prohibited departing with a dead battery. If the pilot followed the POH, he would not have crashed.

The take away nugget of information that you should leave your readers with is that if the airplane needs electricity to function, never depart with a dead battery.

In your AVweb podcast with Peter Maurer of Diamond Aircraft, you mention the FADEC engine in the DA50 as an IOF-550N or a FADEC version of the normally aspirated IO-550N which is used in the Cirrus. The engine used in the DA50 is a TSIOF-550J, which is actually much more closely related to the TSIO-550E or C. The leading “T” in the moniker indicates it is turbocharged. All three of these engines are nearly identical with dual turbochargers, dual intercoolers, tuned induction and crossflow heads. Actually, Malibu Power and Propeller has been flying a TSIOF-550J for nearly a year-and-a-half in a Piper Malibu.

What a nice surprise. Eight months ago, I bought the King Schools program

Flying the Garmin 430/530 for $249. On their Web site, I saw that they have a new updated course with WAAS info. I called for the upgrade expecting to be told to pay another $249 or at least $50 or so for the additional discs. I was told that the upgrade would be free. Not even any postage or handling. Wow! I am impressed. Good for John and Martha.

On another subject, I found your article “Top 10 Safety Investments” in the August issue to be the best article in the two years Ive been a subscriber. Thank you for the great magazine. Expensive, but worth every penny.