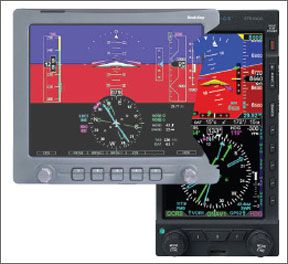 I think your comments about EFIS in the September 2007 issue (First Word, page 2) miss the point. The current EFIS design as replicated across many vendors products provides a consistent human/computer/airplane interface in much the same way that a six pack of steam gauges provided a consistent interface that allowed a pilot to go from one airplane to another without a lot of retraining.

Right now, the pilots of light aircraft are in the process of retraining from steam to EFIS, so now we have to know how to fly two rather different systems of displaying the same information. If every vendor had a different representation of the data, then who knows how many systems we would have to learn? When

mistakes can lead to safety issues, some degree of standardization is actually a good thing.

Good point, but were not buyin it. Theres not much consistency between a Garmin G1000, an Avidyne Entegra, the Chelton FlightLogic and now several more newcomers. Nor should there be, in our view. Let the free market deliver the best product based on sensible design and economics without standardization and the safety bogey man becoming just another excuse for mediocrity.

Your comments regarding glass displays in the September issue were interesting, but let me give you a different viewpoint. No question the glass cockpit is the future-the question will be format, which, for the present, is all over the map.

My shop has installed a few Chelton displays and in virtually every instance, we replaced them within six months. The problem was pilot confusion. There was just too much drilling down and the system lacks intuitiveness. The Garmin system is more user friendly, but also takes time getting used to.

I believe the problem is that we old timers who have been flying steam gauges all our lives find the transition to glass not as straightforward as one would imagine. My guess is the newer generation, who have grown up with computer games, will feel more comfortable with glass because that will be the only thing they have ever flown with. Theres no question the FAA or industry will eventually set standards, so all displays will look and act similar, as they did years ago when any pilot could get in any airplane and without an instruction manual, operate the navigation equipment regardless of manufacturer. Hopefully, that will happen in my lifetime. But for the time being, Ill stick with my EFIS panel that mimics steam gauges.

A while back, I read your report on CamGuard and decided to try it in my 1951 170 Cessna with a 300-hour engine. I added the prescribed amount of CamGuard to a fresh oil change (AeroShell) and subsequently have done so another three times.

Two Sundays ago while taking a trip to Redding, California, one of the exhaust valves stuck in the open position about 200 feet off the deck, after which I landed safely if not smoothly.

Upon getting the valve loose, the mechanic advised me that the engine looked like a garbage can with all the carbon that came out of the engine. It has an autogas STC and I usually use car gas every other fill-up.

Do you think I should I stop using CamGuard? We dont have a clue as to what caused this, as the engine has been running with never a miss or fouled plug. We always lean the engine above 1500 feet, as most of the flying is done around that altitude. What are your thoughts?

Were more inclined to suspect the autogas than the CamGuard. Engine shops have bent our ear about problems with autogas and one of the complaints is carbon deposits on valves due to autogas additives. CamGuard is still new and not widely in use, so we havent heard much feedback about it yet.

Id like to comment on your evaluation of traffic systems. Iv had TIS since it became available and found it reliable in presenting targets-good with altitude, but only ballpark accurate with azimuth. I switched to an Avidyne 600, which is, in my estimation, far more precise in every respect and far superior to TIS in alerting for traffic.

You failed to mention that none of the TIS systems has any audible alerting, a huge advantage. To put either of these in the same boat with the primitive portables is an error.

While perhaps anything is better than nothing, I think the time spent looking all over for a vaguely identified potential target is more dangerous than flying the airplane. The value of any of the panel systems is that they help keep concentration on the primary task, which is operating the aircraft.

Actually, all of the portables include some kind of audio alerting. So do the panel mount units, which are reviewed in this issue.