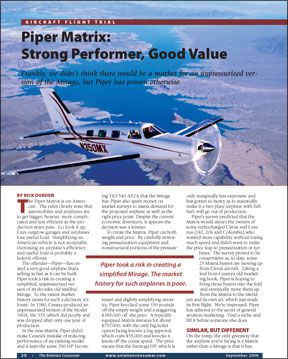 I am very surprised that the Piper Matrix is selling so well. I suppose glitz, fancy new paint and a glass panel supersede the pragmatic need for a very important element: pressurization.

The Malibu is relatively slow below 10,000 feet; the wing with its high aspect ratio being designed to shine in the upper teens and flight levels. Piper should have compelled Lycoming to reconfigure its Matrix engine for LOP operations. In my TCM Malibu, I burn 6 GPH less for comparable speed (205 knots) than a Lycoming Mirage.

I strongly suspect that Matrix owners, after a year or two of wistfully watching Malibu/Mirages climb above them into on-top blue skies while they bump along in the clouds sucking on the oxygen tube, may come to rue the day they rejected pressurization. Six thousand hours, including 4000 hours in a pressurized Malibu, have told me that I would rather give up flying than go back to a non-pressurized airplane.

Ya Didnt Think of This

Heres a reason for headset choice that I bet you have not heard: I have a couple of LightSpeed 30-3Gs which I bought when I had a single and found them to be great products. In January, I bought a Seneca and discovered that I could not

hear the beat from the props when they were out of phase. The ANR seems to be particularly effective for that type of noise and I could not even detect out of phase by ear, let alone correct it.

I bought a Clarity Aloft passive set that mutes all the noise very well, but does not filter out the beat. I think I remember warnings somewhere that ANR might make it impossible to hear certain types of noises in airplanes that the pilot might want to hear. Passives let you hear everything, just at a much more comfortable level. Now, I wear the passives and my passengers use the ANR. Everyone is happy.

I dont know about the other vehicles on the chart on page 25 of your August article on aircraft economy, but I get about 20 MPG if I drive my Navigator at a steady 50 MPH. Actually, the mileage doesnt go down that much until I go over 70.

On average, with mixed driving, I get between 15 and 16 MPG. Even the EPA sticker gives 12 MPG city and 18 MPG. I am on my fourth Navigator and they all have given me about the same.

Incidentally, my C90B King Air gives me about 4 nautical miles per gallon, so I guess I fall off the chart. A friend who has a Eclipse says he has the same problem as me. ATC has a hard time giving him altitudes where the faster jets fly. His problem is getting into the upper 30s; mine is the upper 20s.

The aircraft economy table on page 25 of the August issue shortchanges the fixed-gear Cessna (Columbia) 350. According to the POH in mine, a 165-knot cruise at 6000 feet, requiring 61 percent power, yields 11.4 GPH. That works out to 14.5 MPG and ranks the 350 significantly higher in the table. Moreover, the 350 is faster than all of the non-turbo four-place aircraft ranked higher. The few coming close in speed are retractables and who wants the increased complexity, weight, maintenance and insurance premiums of a suck-up gear in this era?

I fully agree with the assessment about light sport aircraft as written in the August 2008 issue. My interest in the segment is exactly for the reasons described. I am a 900-hour private pilot with an instrument rating, but after spending upwards of $250 per hour to fly aircraft that provided no more utility than some of the LSAs on the market now, I realized things must change.

I have therefore sold my 172SP and terminated my timeshare in a Cirrus, to eventually find a good cross-country LSA. But alas, there are not many out there. I hope things evolve soon. I would like to see an LSA segment review/update in the magazine, which I would hope will aid in the adoption of this market.