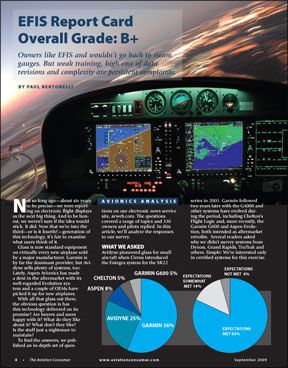 I read with great interest the EFIS article in your September edition. I did not participate in your survey, but feel compelled to comment on my G1000-equipped Diamond DA40. I obtained my private certificate on steam gauges and then purchased my Diamond DA40. After two incidents where I am convinced that my glass cockpit saved my bacon (and that of my CFI), I would never fly steam

gauges again. In October of 2007 on approach, while working on my instrument rating, I was descending through 1200 feet on long final at the POH-specified air- speed of 70 knots.

Then, in September of 2008, while on a cross country from Washington state to New York and over Idaho, I was IFR at 13,000 feet cruising above a solid undercast.

Icing was not predicted, but as the cloud layer rose, I found myself passing through the soup with serious clear ice forming on both wings. I informed ATC that I needed to descend quickly. I was cleared to Lewiston. My choice with steam gauges would have been to either ice up and stall, or rapidly descend through the soup into a mountain. That large MFD with terrain awareness permitted me to make my steep turn and fast descent with no stress, knowing exactly where I was with respect to terrain. I descended 2500 feet, broke out below the clouds in a mountain valley, and watched as the ice quickly broke away and I made an uneventful landing at Lewiston. Please add my comments to those who absolutely love the G1000.

Were as tickled pink as the next guy about EFIS, but speaking up for the dinosaurs among us, icing in the mountains (not to mention windshear) has never meant instant death for a skilled pilot flying without the benefits of EFIS. A big MFD or a moving map GPS is a big plus, but contrary to popular belief, its actually possible to fly IFR without a $40,000 avionics suite.

One other note, all G1000s have Victor airways, contrary to a respondents comments about “Garmins Dumb Things,” referring to it as a option. If there is a G1000 flying out there without Victor airways, they are running outdated software.

It may shock you to learn that there are G1000s running outdated software. As for the model year, Cessna doesnt list model year anymore, but only date of manufacture. Our Bluebook data shows that the 206 was available with the G1000 in 2004 but that the 182 and 172 werent manufactured with the G1000 until 2005. We were thinking of the Cessna 172 and should have clarified that.

I recently installed an RC Allen 2600-2 in my Super Decathlon as a primary attitude gyro. For cross country flying, it is very satisfactory. But when doing acrobatics, it will always tumble just like a gyro. It will reset in a few seconds.

The RC Allen claim was that it would even work for acrobatics, but it will not. But since you cant hurt it, its perfect for an acrobatic airplane that might otherwise damage a gyro. I am happy with it and it looks cool.

After reading your article “Turbo Wars: TAT vs. TCM” in the September, 2009 issue, I wanted to share some information with you that may help explain the performance differences you noticed.

Chad Menne of Malibu Aerospace has shared this information with me; feel free to contact him to verify it. Chad has been closely involved with developing the TSIOF-550J engine with TCM to use in his retrofit STC for Malibus and Mirages to install the FADEC TSIOF-550J engine.

The TSIOF-550J engine was certified by the FAA just before Oshkosh. As part of the development effort, he has obtained a lot of inflight torque data on both the FADEC engine and the TSIO-550C engine, which most Malibus in existence have been converted to. He used a Lebow torque hub mounted on the crankshaft propeller flange.

Although the TSIO-550C engine is rated at 310 HP, he has found that installed power was generally a bit over 330 HP at 35.5 inches MP and 2600 RPM. He has also found that the 350-HP TSIOF-550J engine will develop about 390 HP in flight at the MP and RPM settings which are specified for it to develop 350 HP. So it seems that TCMs HP ratings are conservative. The TSIO-550-G engine is identical to the -C engine, with the exception that the intercoolers are a bit narrower so the engine can fit in the narrower Mooney cowling.

I have spoken with the director of maintenance for Tornado Alley Turbo and he told me that the absolute pressure controller (not slope) for the wastegate is adjusted to be slightly less than the theoretical 29.92 inches MP. The issue is that at full throttle at sea level, the actual upper deck pressure that the normally aspirated IO-550 sees installed is actually slightly less than ambient pressure due to a small pressure drop through the airbox, air filter and induction plumbing before the throttle butterfly. So when the turbo is added, they do not want to exceed this MP level that is seen when it was normally aspirated.

Another caveat is that TCM has tested the TSIO-550G and -C engines with 94UL fuel and found that they have sufficient detonation margin to use this unleaded fuel without resorting to any engine modifications. I am told that the 94UL is essentially 100LL, but without the 2g/liter of tetraethyl lead added. ASTM is currently developing a specification for this fuel.

With the high 9-to-1 compression ratio of the IO-550N, will it have enough detonation margin when turbonormalized to use 94UL?

We checked with TAT on measured power reductions due to intercooler losses and pressure drop and were told its on the order of “a few percent.” So if the engine is supposed to be producing 310 HP at sea level, it might actually be at 300 or a little less. At 270 HP, which is the number Continental said it measured on the TAT engine, the loss would be nearly 13 percent. This strikes us as unrealistic, given the performance of the SR22 TN. As for 94UL, well see what we see.

In your October 2009 issue, I enjoyed the Taylorcraft article. I was somewhat surprised, though, at your omission of an interesting part of the companys history. That is, their manufacture for several years of four-place airplanes, of which the later ones were made of fiberglass, with the O-470-J 225-HP Continental engine.

Most of this activity occurred at Conway, in western Pennsylvania, under Mr. Ben Mauro. Toward the end, the company moved to Connellsville, Pennsylvania. AOPA Pilot had an article on the four-place Taylorcrafts a few years ago.

I realize that the focus of your article was on two-place Taylorcrafts, but believe a brief mention of the larger ones would have been appropriate to round out your otherwise thorough company history.